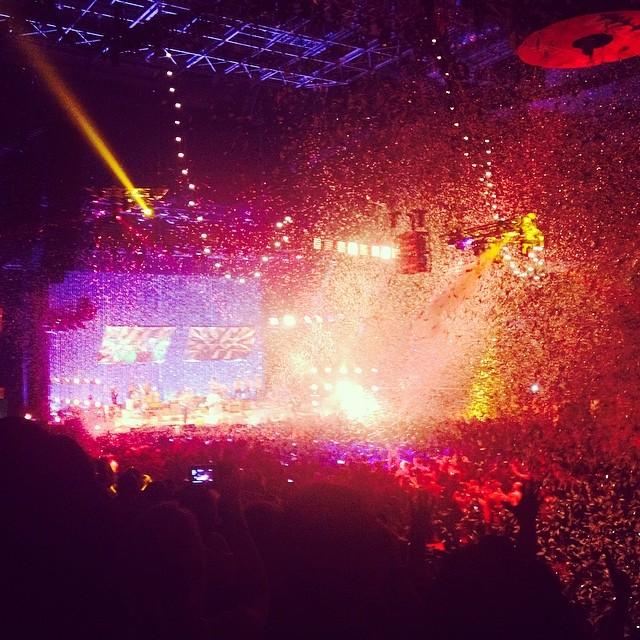 If you missed the Arcade Fire show at the Palace this past Monday, I have a solution that is the second best thing to being there.

Step 1: Make a “greatest hits” playlist and shuffle it.
Step 2: Put some aluminum foil in the microwave and cook for 120 minutes.
Step 3: Watch the pretty colors and hear the pretty music.

I thought I was prepared for the spectacle that Arcade Fire would put on. Before the concert, I kept having this irrational thought that because the band had an LP called Reflektor that their show might entail some sort of elaborate, bright light and mirror set up. I even had sunglasses in preparation. Well, they were actually an accessory to my Miami Vice getup (teal blazer, rolled sleeves, purple t-shirt, white slacks) as the band requested the audience to come in formal dress or costumes. When the curtain went up on the stage, my wild hypothesis was surprisingly confirmed as countless stage lights blinded the crowd. The whole scene looked like Mad Men at Comic Con, if Comic Con took place inside the world’s largest tanning bed.

All forced jokes and specific analogies aside, it was refreshing to witness a live production that was just as complex and thoughtful as their music. Every song had its own color scheme and light arrangement. During “Neighborhood #3 (Power Out),” the lights would drop intermittently. For “Haiti,” the mirrors and screens disappeared to reveal palm trees. “We Exist,” made use of the whole color spectrum to parallel the song’s condemnation of Jamaica’s anti-homosexuality policies. An array of hexagonal mirrors behind the stage rotated, creating infinite amounts of different backgrounds. A figure clad in a suit and helmet made entirely of disco ball mirrors would emerge from the crowd occasionally to be bathed in spotlights, turning him into a painfully visible miniature sun. In both the music and the visuals, there was a constant tension between the organic and inorganic. Shining metal and synthesizers clashed with tropical and acoustic guitars.

When Arcade Fire left the stage after two hours of nonstop music, “another” band called The Reflektors came on wearing paper mache heads and pantomimed Stevie Wonder’s “Superstition.” The Reflektors unmasked themselves as Arcade Fire to finish the night with “Wake Up,” but not before an energetic cover of Stevie Wonder’s “Uptight (Everything’s Alright)” while frontman Win Butler danced around wearing a LCD screen helmet that flashed images of ex-Detroit mayor Kwame Kilpatrick.

Arcade Fire is worth seeing just to marvel at the sheer talent that this ensemble of musicians possess. Not only is it impressive to see a dozen people with the control and discipline to faithfully reproduce their songs, but also that few of the band members stayed on one instrument throughout the night. It seemed that Richard Reed Parry was never on the same instrument twice. The husband and wife duo of Win Butler and Régine Chassagne are positively adorable on stage, and Butler is an entertaining frontman that maintains humbleness before an audience. It seems that ever since their Grammy win back in 2010 for their album The Suburbs, Arcade Fire has gotten a lot of flack for “selling out” and “becoming mainstream.” While I personally never saw it that way, this show absolutely destroyed that any inkling of that sentiment. Arcade Fire is a collective of imaginative, gracious, and gifted people who have discovered a sweet spot between modesty and extravagance.