Up Close and Personal with Frontier Ruckus: The Living Room Show 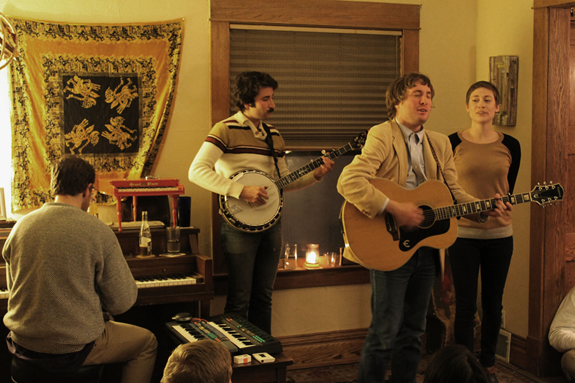 The twang of the banjo, hot cider steaming on the stove, Girl Scout cookies laid in perfect circles, and the distant memories of summer as the warm melodies fill the room, all of which were part of the experience that is the Frontier Ruckus Living Room Show. Maybe not every show will have the Girl Scout Cookies or Hot Cider per se, but the memories will be everlasting and definitely unforgettable. Not only was the living room show extremely up close and personal, but it also bordered a line where we were all so close any one of us could reach out and touch the band members themselves if so desired.

The show itself was intimate to say the least, about 50 or so of us had jammed into the living room, and each of us wondering who the other was due to the fact none of us knew a single soul. This also stunned the owner of the house who made an effort to learn everyone’s name that she didn’t know, although that was a struggle in itself because she only knew her roommate at the time. I think that’s what made this event so special, people from different backgrounds and ages being brought into a home that would be so welcoming to let us sit in their living room and enjoy the sounds of Frontier Ruckus.

The intimacy factor didn’t just stop between the attendees themselves but also occurred between the band members and their very attentive listeners. In between the two sets, the band members of Frontier Ruckus actually took a chance to get to know the people that admired their music and came to support them in this once in a life time chance to see them up close and personal. The time between sets was used to not only freshen up their drinks, but also talk to the people that were so awe-inspired and excited to be there. I watched as groups of people surrounded the band members and each one of them received responses to their many questions no matter how long it took to answer them. To the band itself didn’t seem to be bothered by the questions, but longed to engage the crowd even more by encouraging us all to least participate in the long “Oh” in “Dark Autumn Hour.” In harmony, all of the “OH’s” mashed together to fit the performance creating an environment that would be hard to recreate with a larger venue.

This concert also allowed us all to see into the eyes of Frontier Ruckus. Each song had it’s own little intro of where it originated from as well as what the story was behind it. All of which was extremely interesting, songs that were about finding secret stashes behind Taco Bell, confusing three-way relationships, and the memories of that first car that you can’t forget. What also became intriguing was that each attendee there also had their own story, each one of them more interesting than the last. Many of them were musicians themselves, some of which I noticed were so inspired by the dancing rhythms of Frontier Ruckus that they themselves had to pull out a pen and paper to just write their own ideas down.

Overall, the experience itself was memorable and very enjoyable. In such small venues such as this one it’s interesting to see the true colors of bands when only surrounded by about 50 of their fans. The unique part about this was not about how small of a venue it was, but how many people could come together for one night to enjoy the sounds of Frontier Ruckus. Looking back, it was an interesting sight when the band members themselves were enjoying the beverages, speaking to everyone, and even taking pictures with the die hard fans who knew this would be their only chance to get a snapshot of the miraculous event. At the end of the night, I did manage to pull out a few bucks to not only get a sticker from the band but also a band tee that is quite fashionable in itself. My advice is that if Frontier Ruckus is ever in your living room, be sure to get to know them, who they are, or even share a story about your trips to Taco Bell, interesting three-way relationships, and those memories of your first car, because they’re here for you and they want to get to know their fans just as much as you want to get to know them too.