Mitchell: Spartans finally get out of the first weekend, but what’s next? 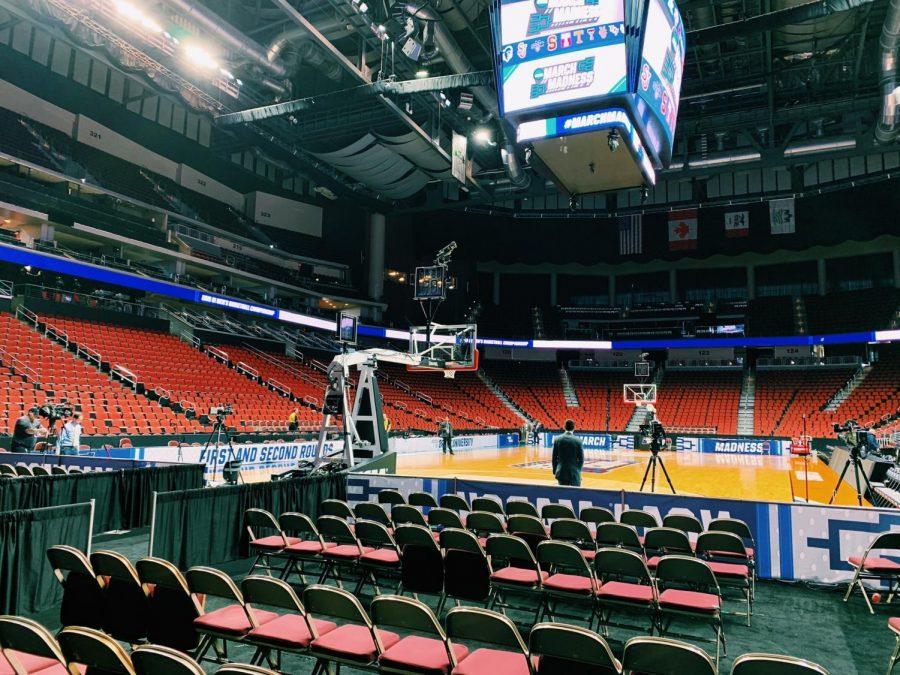 That’s how long it has been since head coach Tom Izzo and the Michigan State Spartans have reached the Sweet 16.

Three times, MSU has been sent back to East Lansing with their dreams of an NCAA Championship shattered.

As the No. 2 seed in this year’s NCAA Tournament, Michigan State took out No. 15 Bradley and No. 10 Minnesota to make it out of the first weekend and lift the curse that has been hovering over the Spartans.

Even though they still have a long way to go, moving on to the Sweet 16 was a huge milestone for almost everyone in the locker room as these are uncharted waters for many of the upperclassmen, including senior Matt McQuaid.

“It has been a big [rallying cry]. I have not been out the first weekend my entire career. I honestly felt that I would not have had a good career if we had not gotten out of this first weekend,” McQuaid said. “This is such a great program that is consistently going to Final Fours, so it is great to finally make it out the first weekend.”

For a program that sits atop the college basketball world these early losses have been unprecedented, especially since Michigan State has come in with teams that had serious shots at a title.

There’s the 2015-2016 team that featured player of the year Denzel Valentine that got upset in the first round by No. 15 Middle Tennessee, then the 16-17 team that was young and only earned the ninth seed in the tournament which put them on course for a second-round matchup with No. 1 Kansas. Finally, there’s the 17-18 team that had some experience under their belt and a new shiny piece in the form of Jaren Jackson Jr. Many had that team as a national champion, even former President Barack Obama picked them to win, but they would go on to fall in the second round to No. 11 Syracuse.

It’s these upsets and poor draws that make this Sweet 16 just a little bit sweeter even if it’s the 14th in 22 years for Izzo.

“This one feels better. We were disappointed in ‘16. We had a real good team and we had a loss to a team that played better, Middle Tennessee, and the next year people said that we didn’t play well. We had injuries to our bigs and I thought last year so many issues,” said Izzo. “But I look at these guys and these guys have won 60 games now in two years. That’s a hell of an accomplishment and getting back to the Sweet 16, there’s nothing like playing when it stays daylight longer. You come out of those practices now and the sun is still shining. It’s the greatest feeling in the world.”

It’s a sigh of relief for this team just as much as it is a clean slate, no one in this Michigan State locker room has seen a Sweet 16. Not Matt McQuaid, not Kenny Goins, not Cassius Winston and not Nick Ward, this is the first. So while they can and should celebrate finally getting the monkey off their back I’m sure the question of what’s next lingers in their minds along with the Spartan faithful.

In this next round, gone are the plucky mid-majors looking to pull off the impossible and the middle of the pack teams that do enough to get wins. Now the thoroughbreds are here, the teams that have just as much talent and the same lofty expectations that Michigan State has.

The focus has been on getting out of the weekend, but now the Spartans eyes have to set on the team they are meeting in Washington D.C. The Louisiana State Tigers are waiting and they’re a team just as talented and just as hungry. This Sweet 16 berth is the first since 2006 for the Tigers.

Powered by the point-guard play of sophomore Tremont Waters who averages 15 points per game and 5.9 assists this team is surging even without their head coach Will Wade, who is suspended due to a wiretap scandal.

LSU also had two bigs who are monsters on the glass in Naz Reid and Kavell Bigby-Williams who average 7.2 and 6.7 rebounds respectively.

Michigan State has spent most of their time focused on getting out of the first weekend, but now their eyes need to turn towards Washington D.C and the LSU Tigers if they want to truly change the fortunes of the program.

“We were just trying to win the weekend, which we did. Now we need to win another weekend. Our motto is this is a two-game tournament,” Goins said.

The Spartans are finally out of the first weekend and for once, there’s more basketball to play.