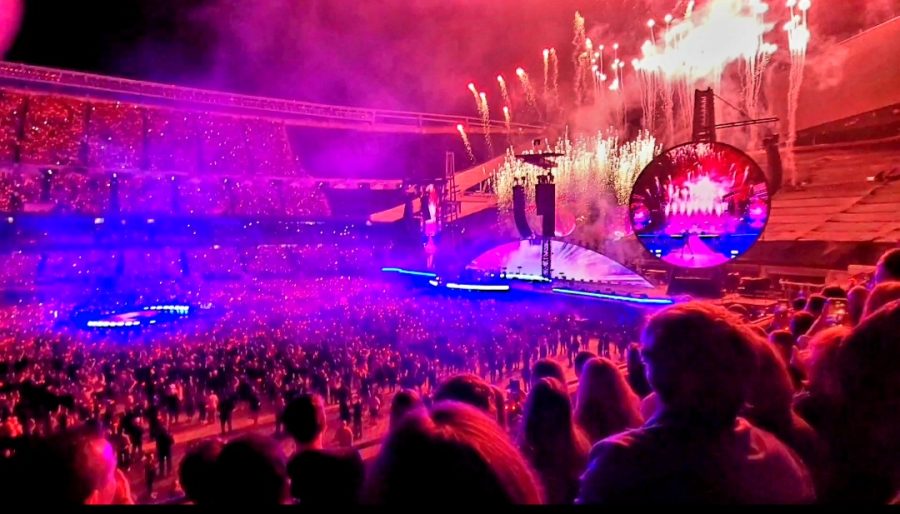 Coldplay kicked off their Music of the Spheres world tour this year. Their last tour was in 2017, which means many fans were eager to see their return. Coldplay’s tour sold out many of its tour dates, including their show that was held in Chicago at Soldier Field on May 28th — their only sold out U.S. show.

Coldplay’s tour merchandise stood out with its variety of bright colors. In their pledged effort to be more environmentally friendly, all of their merchandise was sustainably and ethically sourced. They replaced plastics and polyesters with natural alternatives like organic cotton. For every ticket that they sold, they also planted a tree. Also, they powered their stage production almost entirely with renewable, low emission energy. Coldplay made sure that their fans got in on the fun as well. Fans had the opportunity to dance on kinetic energy floors and ride on stationary bikes in order to help power lights and overall bring more awareness to the band’s environmental initiatives. According to their website, their three main goals are to, “reduce CO2 emissions, reinvent by supporting new green technologies, and to restore the environment by supporting and promoting many nature projects.”

The show had two opening acts. First to the stage was the incredible group DRAMA. The lead singer sang boldly in her purple gown. She and her backup singers made the crowd jump as she sang, “You’ve Done Enough,” “Hold On,” “Don’t Hold Back” and “Dark Rain.” The group mentioned that they lived only ten minutes away from the stadium. It was nice that the tour supported local artists as well. The lead singer also mentioned how they were grateful to perform there and open for H.E.R. and Coldplay.

The next act was that amazingly talented H.E.R.

She appeared on stage in a black jumpsuit with big shiny stars all over it and, of course, wore her signature sunglasses too. She put on such an astounding show. She played the guitar, drums and sang her heart out. It’s no surprise that she’s a Grammy Award-winning artist.

“I’m not sure if there are any H.E.R. fans in the house tonight, but we are going to do it like this,” she said.

She performed songs and covers like “We Going Crazy,” “Cheat Code,” “Make it Rain,” “I Love Rock N’ Roll” and “We Made It.” She completely shredded the electric guitar and played the keyboard during an unnamed song that she had just written.

“I just wrote this and I wanted to see what you all think,” said H.E.R.

The crowd clapped and cheered for the R&B artist. She was just as grateful to be opening for Coldplay.

“It feels really good on this stage. I’m so thankful to Coldplay,” she said.

After H.E.R’s set, the stadium’s seats were full. Fans were more than ready for Coldplay to perform. All of a sudden, the lights fade and the stadium goes pitch black. The theme song from E.T.: The Extra-Terrestrial plays while a video of the group appears on the large screens as they walk closer to the stage. Soldier Field erupted with excited screams.

Once the band got on stage and kicked off with “Higher Power,” a hit song from their Music of the Spheres album, fans’ colorful bracelets lit up the stadium. Fireworks and confetti burst into the air.

“You are one of the best crowds in the world,” said lead singer Chris Martin.

He acknowledged people in the crowd that could be from Michigan, Illinois, Ohio, Wisconsin — people from anywhere who came to their concert that night..

The band played a mix of their hit songs, including “Adventure of a Lifetime,” “The Scientist,” “Viva la Vida,” “Yellow,” “Clocks,” “Something Just Like This,” “A Sky Full of Stars” and “Fix You.” They also played hits from their latest album including “Let Somebody Go,” “Human Heart,” “People of the Pride,” “My Universe,” “Humankind” and “Biutyful.”

After Coldplay sang “Viva la Vida,” the crowd continued singing the chorus. It was truly a beautiful thing to witness. There were moments in which Martin would talk to the crowd, including asking if they could put their phones away during one song in order for everyone to feel more connected. He also acknowledged the recent incidents of gun violence in our country and wanted to send love to everyone, especially those who have been directly affected by it.

Coldplay isn’t shy in showing their support for diversity and inclusion. While performing “Something Just Like This,” the band wore alien masks and Martin sang the song in sign language. In another touching moment, a fan gave him their pride flag and he ran with it on stage; he hung it up for the whole crowd to see.

During the band’s performance of “Let Somebody Go,” the stadium lit up in big red hearts. For “My Universe,” their song made in collaboration with K-pop group BTS, BTS couldn’t make it to the show to perform with Coldplay. However, the band made sure to play visuals of BTS singing their parts on the screens as Martin sang along with them.

BTS might not have been their special guest, but they did have a few others, including a fan named Nicole that played a unique stringed instrument with them. The band moved closer to the crowd during their set with her along with another special guest, Lupe Fiasco. Fans surrounded the band while they were on a tiny circular stage on the main floor.

“Everyone has been standing for hours on the floor for us, we decided to come a little closer,” said Martin as the band made their way to the circular stage.

Lupe Fiasco joined Coldplay on the floor soon after and sang, “Superstar” and “God Put A Smile Upon Your Face.”

“Can I just say what you did for me, for my life? I am the biggest Coldplay fan,” said Lupe Fiasco.

The crowd screamed for both artists and clapped along with the rhythms.

Chris Martin went on to express his gratitude towards his fans. 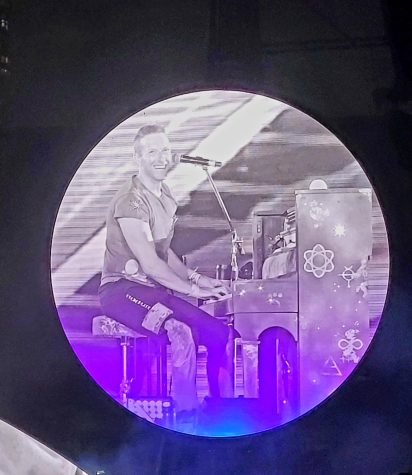 “We understand, since COVID and everything, that coming to a big concert is really a hassle and I’m so grateful for you. You go through the traffic and everything else you have to go through, the effort that you made to be here, we’re so grateful to see you,” he said.

“It might be great to take this incredible energy from Chicago and the surrounding areas, to send it out to Uvalde, Ukraine and to everywhere that there’s trouble and pain. You can kind of feel powerless when this stuff happens. The only thing you can really do is send your best and send your love. Especially since there’s a big group of incredible people in one room. So let’s try to see what happens. Send it out to your grandmother or anywhere that you want to send love out to. Just wave your hands up like this for five seconds and see what happens,” said Martin.

After he counted down, the stadium went dark and bright red fireworks shot up into the sky. The whole concert was truly incredible. There were pyrotechnics, bright colorful lights, fireworks, confetti, and genuinely happy fans. Once fans were leaving the stadium, many could be heard singing the chorus to “Viva La Vida” joyfully in the nighttime streets. Coldplay put on a great show and proved to be Chicago’s “Higher Power.” 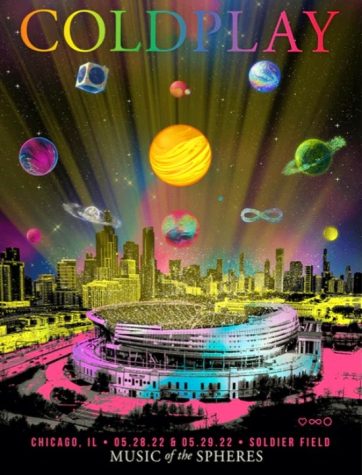 To find out more about Coldplay and their pledge of staying environmentally friendly, visit https://sustainability.coldplay.com/