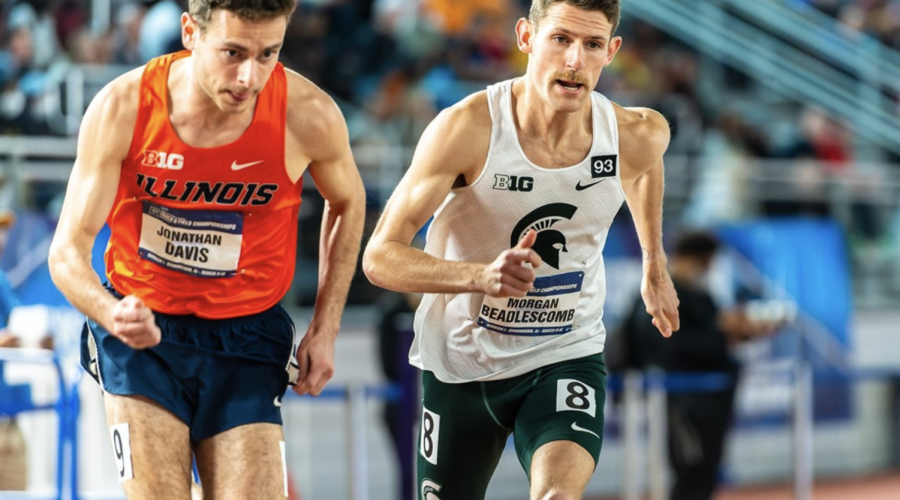 EUGENE, Ore.—Eight Michigan State track and field athletes traveled to the University of Oregon’s historic Hayward Field from June 8-10 to compete at the 2022 NCAA Outdoor Championships. The Spartans collected two medals and eight All-American honors over three days while competing against the nation’s best collegiate athletes.

The highlight of the first day came in the men’s pole vault, as senior Trevor Stephenson earned Second Team All-American honors for the second straight season. Stephenson cleared the opening height of 5.00m on his first attempt. The next height of 5.15m took him three attempts to clear, but Stephenson rebounded with another first-try clearance of the subsequent 5.30m height.

After getting over the next two heights in two attempts each, Stephenson was unable to clear 5.50m in three attempts, which would have been an overall personal best. He ended up finishing three places higher than last season, vaulting for an outdoor PR of 5.45m to take 10th.

Kicking off the four-day spectacle were decathletes Heath Baldwin and Ryan Talbot, who competed in five of their ten events on the first day, with the other five coming on day two.

Baldwin captured the second top-10 finish between the pair up until that point by taking sixth in the shot put with a 14.46m toss. Talbot took 17th in the event, throwing for 13.03m. Baldwin’s 2.01m high jump finish was less than a hundredth of a second under his PR and good for fifth place. Talbot took 16th in the event with a 1.89m top jump.

Talbot rebounded from two straight finishes outside the top-15 by taking fifth in the last decathlon event on Wednesday, the 400m, with a personal-best time of 47.52 seconds. Baldwin took 21st in the event with a 51.76 second time. Talbot ended the first day in 12th place with 3,972 points, while Baldwin stood in 16th place with 3,839 points.

After Washington’s Haley Herberg jumped out to a gutsy 100m lead that lasted the majority of the race, Magness was able to stay toward the top of the main pack, keeping a good position for a potential kick. The group ended up spreading out as the race went on, with Alabama’s Mercy Chelangat and Rice’s Grace Forbes overtaking Herberg late, along with Magness. The top three women finished roughly ten seconds behind each other, with Magness taking third in a personal-best time of 32:59.96.

Magness became the first Spartan female athlete to earn First Team All-American honors in both the 5000m and 10,000m.

Redshirt junior Makayla Perez battled from behind for much of the 10,000m race, picking off runners slowly but surely as the pack began to spread. Perez managed to work her way from last place to 15th in the second half of the race alone, turning in a tough performance in just her first outdoor championship appearance. Her hard work paid off, as she earned Second Team All-American honors thanks to a 15th-place finish and 33:43.76 time.

The other Spartan to earn First Team honors on Thursday was Sophia Franklin, who took seventh place in the event and earned her third-career outdoor All-American distinction. After passing on the opening height of 3.90m, Franklin cleared the following two heights on her first attempt. It took two tries for her to clear the next height of 4.30m, and three to clear the 4.35m height after that.

That’s where Franklin would end her day, as she failed to clear 4.40m, which would have been an overall PR. The finish was a season-best for Franklin and is three-hundredths of a meter under her personal best, which she set earlier this year during indoor season.

Talbot and Baldwin competed in the second half of their decathlon events on the second day. The pair started the day off strong, as Baldwin (14.48) took eighth in the 110m hurdles, while Talbot (14.82) finished in 12th with a PR. Talbot followed that up with his best finish of the competition, a third-place mark in the discus, after recording a best throw of 45.10m. Baldwin took 15th in the event after throwing for 38.67m.

Pole vault proved to be the toughest event for Talbot, as he failed to clear his opening height of 4.61m on three attempts. Baldwin finished in 12th, clearing 4.31m, 4.41m and 4.51m on one attempt each.

After all the points were totaled, Baldwin took 13th place in the decathlon with a score of 7538, earning Second Team All-American honors for the second straight year. In his first-career NCAA Outdoor Championship appearance, Talbot placed 20th, collecting 6863 points and an Honorable Mention All-American distinction.

Friday was the last day in Eugene for the Spartans, and the spotlight was on graduate student Morgan Beadlescomb in his final race in the green and white. Beadlescomb ran his third-career 5000m at the outdoor championships, taking second place to earn First Team All-American honors for the fourth time in his track and field career.

Beadlescomb let the projected frontrunners take an early lead while he sat in the middle of the pack, waiting to make a move later on. That move came with just under two laps to go, as Beadlescomb moved up and sprung to the outside to lead the pack, pushing the pace as he went. Beadlescomb was pursued heavily by Big Ten Champion Olin Hacker, however, and the two went into the final 200m neck-in-neck.

Though Beadlescomb closed with a 55.36 second final 400m, Hacker appeared to have a bit more left in him, as he slingshotted himself around the last curve to overtake Beadlescomb’s lead in the final stretch. Beadlescomb finished just under a second behind Hacker in 13:28.38 to capture the silver medal, tied for his best finish at a national meet.

Following the race, Beadlescomb became the first Spartan in men’s program history to earn First Team All-American honors in the 5000m. He has a total of nine All-American distinctions between his track and cross-country careers.

Petruno stayed firmly in the middle of the pack for the majority of the race, which started slow after Mario Garcia Romo of Ole Miss overtook the lead and began to control the pace. Petruno fought to the end as the group sped up, finishing with a time of 3:46.56 after closing in 54.02 seconds. Petruno finished just over a second behind Wisconsin’s Adam Spencer and a podium finish.

Petruno is the first Spartan man to finish in the top-10 of the national outdoor 1500m finals since Justine Kiprotich in 2019.

Both the Spartan men and women finished with eight points, earning 39th and 30th place, respectively. The University of Florida took first place in both fields, good for the seventh sweep in outdoor history and the first since 2015.