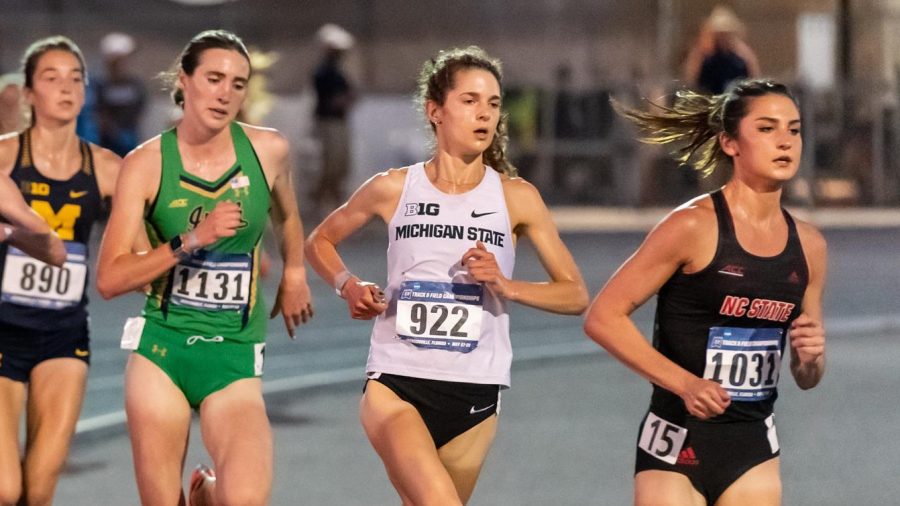 EAST LANSING— After a successful penultimate weekend of the season in Ashland, Ohio and Kalamazoo, the Michigan State track and field team will wrap up its regular season with a trip to the Len Paddock Open on May 7 in Ann Arbor.

Last time out, MSU finished with 14 first-place finishes, including a pair of wins from Quiara Wheeler in the hammer throw event.

Close to a dozen Spartans are set to compete in Ann Arbor. Senior pole vaulters Sophia Franklin, Trevor Stephenson and Michael Davenport. Davenport is coming off a first-place finish last weekend at the Jack Shaw Invitational in Kalamazoo, while Franklin and Stephenson both finished in second place two weekends ago at the Indiana Invitational.

Franklin looks to repeat as champion of the women’s pole vault event at this meet, as she finished with a top height of 4.11m to take first place last year.

Throwers Joshua DeVries and Valadian Pallett succeeded last weekend at the Ashland Alumni Open in Ashland, Ohi, and will compete again in Ann Arbor. The sophomore DeVries threw for a personal-best 61.41m in the hammer throw to take seventh, while Pallett also threw for a PR in the shot put, taking third with a 13.79m toss.

The pair will compete in the same events as last weekend, with DeVries in the hammer throw and Pallett in both the shot put and discus throw.

Rounding out the Spartan field event participants on Saturday is freshman Day’Anna Marr, who has not competed since the Spartan Invitational in early April. She will take part in the high jump. Last time out, Marr set a PR of 1.60m to take 10th overall.

Junior Jalen Smith leads the way on the track for the Spartans as he will run the 800m for the first time in two weeks. Smith is coming off a 1:53.45 time at the Indiana Invite, an outdoor season-best. He’s looking to break the elusive 1:50.00 mark for the first time in his career, and he will have a chance to do so on Saturday.

Four of Michigan’s top 800m runners will compete in Smith’s heat, and three of them have sub-1:50.00 career PRs. Also competing in the first heat is the high school phenom Hobbs Kessler, an Ann Arbor native who recently turned pro after breaking the national high school indoor mile time, qualified for the Olympic Trials and set the record for the fastest 2-mile time in Michigan history.

MSU junior Jeremy Kloss and sophomore Hunter Zartman will compete in the second heat of the 800m.

The final Spartan competing on the track this weekend is senior Ty Buckley, who will run the 3000m. Buckley made his collegiate debut in the 10,000m at the Indiana Invite, running a time of 31:22.19 to take eighth place. His most recent 3000m race came at the Louisville Invitational, where he took 11th place.

Buckley’s PR in the event came earlier this year during the indoor season, coincidentally in Ann Arbor. He ran a time of 8:27.06 at the Michigan Invite to take seventh place.

Field events in Ann Arbor will start at 10 a.m. on Saturday, while track events are scheduled for 12:30 p.m. The Spartans will travel to Minneapolis next week for the Big Ten championships starting May 13.