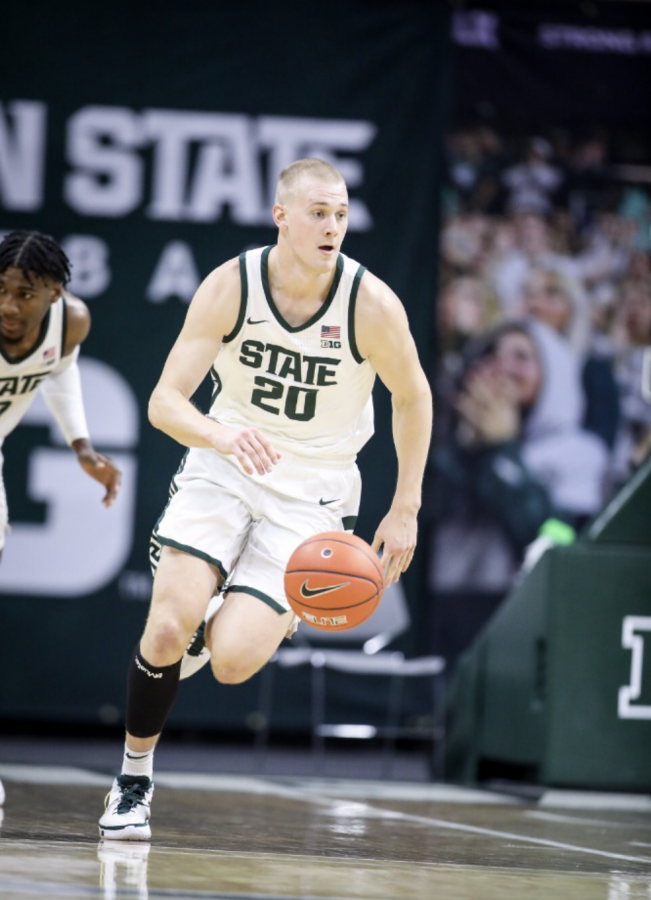 MSU forward Joey Hauser brings the ball up the court during a game in 2020/ Photo Credit: MSU Athletic Communications

A message from #10 🗣️ pic.twitter.com/KIdU8FW5eS

Senior forward Joey Hauser announced that he would be using his COVID-19 year of eligibility and returning to MSU for the 2022-23 season. The announcement comes on the heels of forwards Gabe Brown, Marcus Bingham Jr, and Max Christie (without an agent) entering the draft.

Hauser, who appeared in 35 games for the Spartans this season, averaged 7.3 points and 5.3 rebounds a game in 22 minutes of action. He also proved himself as one of MSU’s best 3-point shooters, knocking down nearly 41% of his shot attempts.

An exceptional free throw shooter, he was second on the team with an 86.2% percentage.

He burst onto the scene in the first round of the 2022 NCAA Tournament, dropping 27 points and eight rebounds in MSU’s 74-73 win over Davidson. This scoring performance was tied for the best mark of his Spartan career.

After originally transferring from Marquette at the conclusion of the 2018-19 season, Hauser sat out a year before appearing in 22 games (16 starts) for MSU in 2020-21. In those 22 games, he averaged 9.7 points a game, shot nearly 48 % from the floor and collected 5.6 rebounds. He also scored in double figures 12 times and had four double-doubles.

The return of Hauser is paramount for a team that has seen Gabe Brown and Marcus Bingham Jr. declare for the NBA Draft while hiring an agent, combined with the transfer of Marble. Hauser’s ability to served as a capable center in small-ball lineups will bode well for a team that currently only has Mady Sissoko as a true five on the roster.

He also can stretch the floor rather effectively, forcing other teams to switch on him often.

Currently, the Spartans have nine players under scholarship: Tyson Walker, A.J. Hoggard, Jaden Akins and incoming four-star TreJuan Holloman to go along with forwards Pierre Brooks, Malik Hall, Hauser, Sissoko and 2022 commit Jaxon Kohler. If Christie returns, MSU will have three scholarship spots to fill, if it so desires.