FINAL: Spartans get back in win column with 6-5 victory over Oakland 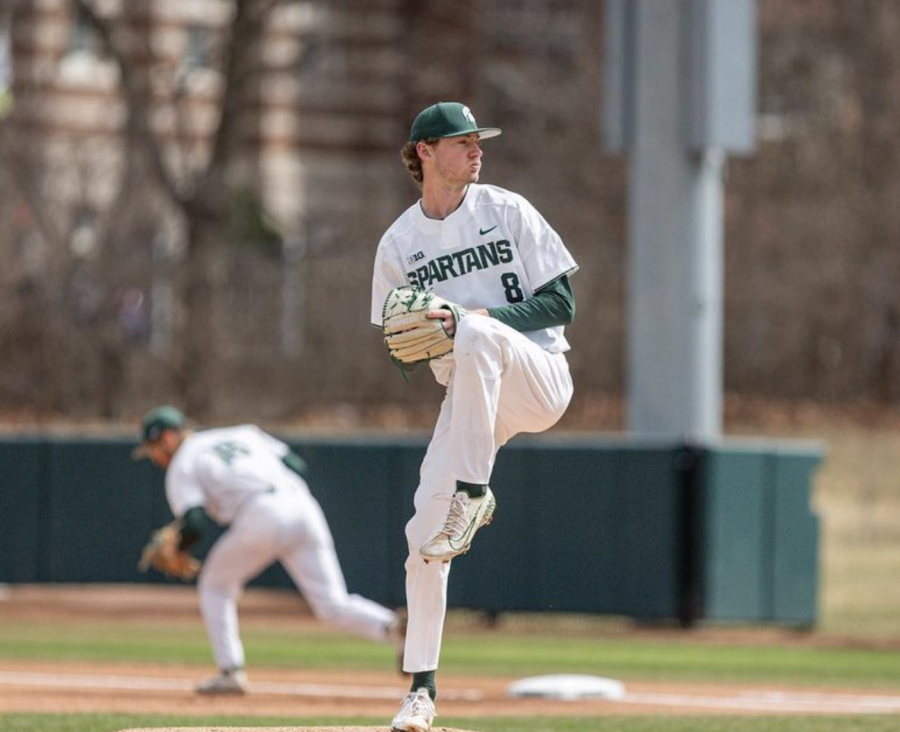 MSU pitcher Harrison Cook delivers a pitch during the Spartans' 9-2 loss to Illinois on May 25, 2022/ Photo Credit: MSU Athletic Communications

EAST LANSING — After being swept by Michigan last weekend, Michigan State baseball (13-19) returned to McLane Stadium Tuesday to take on Oakland University (17-17). The Spartans entered the game on a five-game losing streak and a record of 3-12 over their last 15 games. The Golden Grizzlies put up quite a fight, but MSU was able to pull out a 6-5 victory at home.

Sophomore right-hander Harrison Cook was given the start for MSU and he put together his best performance since his outing against Houston Baptist in the Spartans’ home-opener on March 18. Cook finished the day after five innings of work, striking out four batters, and allowing two runs on five hits.

Oakland jumped out to an early 1-0 lead in the first inning when senior outfielder Brenton Phillips hit a ball that ricocheted off Cook and into the outfield, scoring the runner on third.

The Spartans would answer back in the second inning with sophomore shortstop Mitch Jebb coming through with two outs in the inning. MSU had loaded the bases and a single from Jebb into right field scored Casey Mayes and Christian Williams to give MSU a 2-1 lead.

The Spartans added another run in the third when sophomore outfielder Jack Frank hit his team-leading sixth home run of the season to make the score 3-1. In the fourth, MSU was able to get two runners on early in the inning, which ended the day for Oakland starting pitcher Christian Stelling. In just 3.1 innings Stelling allowed three runs on five hits, while striking out five Spartans. Freshman right-hander Hunter Pidek was called upon to get Oakland out of the jam, and he did so by getting two groundouts to end the inning.

Oakland cut MSU’s lead to one in the top of the fifth, after outfielder Seth Tucker reached on a hit-by-pitch to start the inning. Tucker stole second on the Spartan catcher Williams and advanced to third on a groundout before scoring on a groundout by graduate senior Brad Goulet to make it 3-2.

Junior right-hander Andrew Carson came for relief to start the sixth, ending Cook’s day. Carson did not have an ideal performance out of the bullpen, as he started the sixth with a walk before a triple from junior outfielder Ian Cleary tied the game at 3-3. The next batter, Tucker layed down a sacrifice bunt to score Cleary, but a throwing error by Carson allowed Tucker to reach safely while the run scored to give Oakland a 4-3 lead. Another throwing error on a pickoff move, and walking his next batter forced MSU coach Jake Boss to go to sophomore right-hander Kyle Dunning.

With the Oakland runners on first and third, coach Jordan Banfield called a delayed steal that tricked the MSU defenders allowing Tucker to score and give the Golden Grizzlies a 5-3 lead. Dunning would only face two batters as he retired his first on a popout and allowed his second to reach on a hit by pitch before being pulled. Sophomore right-hander Brian Martin was brought in to get MSU out of the sixth while also pitching in the seventh inning as well.

In the bottom of the sixth, the Spartans put together a two-out rally to tie the game. Singles from sophomore Trent Farquhar and junior Zaid Walker set up Frank who singled home Farquhar, for his second RBI of the night, and freshman Bryan Broecker singled to left to score Walker and tie the game at 5-5.

Farquhar became the hero in the bottom of the seventh, when he singled to score Williams for the game-winning run and give the Spartans a 6-5 lead.

With the lead, Boss decided to go to freshman right-hander Ryan Szczepaniak in the eighth. Szczepaniak typically starts for MSU, but was effective in the setup role, retiring the side 1-2-3 with three easy flyouts.

Graduate senior Kyle Bischoff came in for the save in the ninth for the Spartans. After a double by Luke Malmanger to start the inning, Bischoff had back-to-back strikeouts before an easy groundout to Farquhar sealed the win for MSU.

The Spartans put an end to their losing streak thanks to much improved pitching and timely hitting from their top hitters. Jebb, Frank, and Farquhar have been the team’s best hitters all season and they came through Tuesday, combining for five of the team’s six RBIs.

MSU returns to action Wednesday at 6:35 p.m. against Eastern Michigan at McLane Stadium. The Spartans will look to put together two consecutive wins for the first time since their series sweep against Houston Baptist. MSU hasn’t had much success against MAC schools this season as its record currently sits at 0-2 with a 12-3 loss to Bowling Green and an 18-7 loss to Western Michigan last week. Eastern Michigan enters the contest with a 15-19 record and 2-3 record in its last five games.