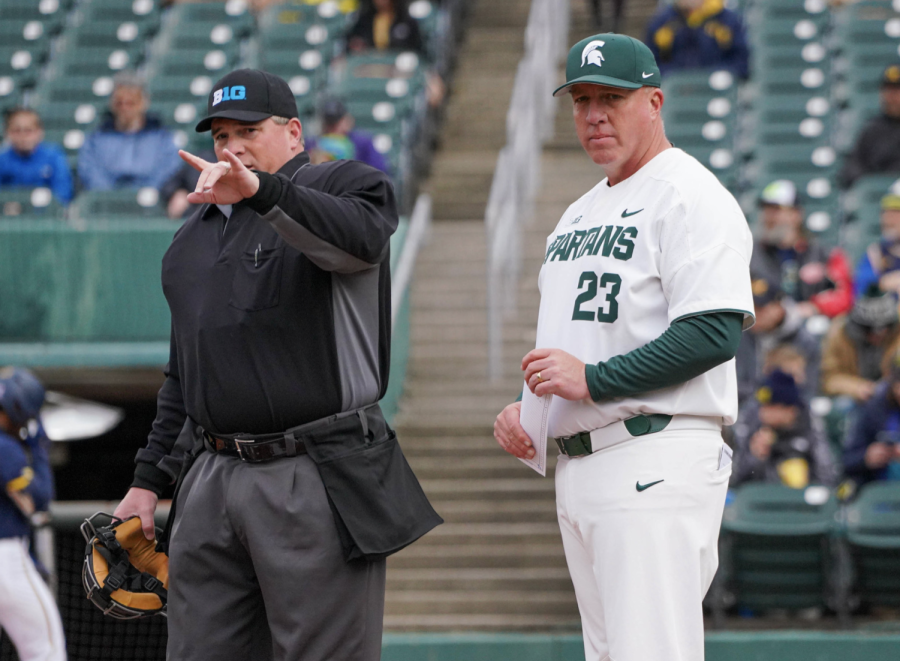 MSU coach Jake Boss stands next to an umpire before the Spartans take on Michigan on April 15, 2022/ Photo Credit: MSU Athletic Communications

EAST LANSING – After a tough loss in the Capital Clash, Michigan State hosted Michigan at McLane Stadium for Game 2 of its series.

Junior designated hitter Tito Flores brought junior second baseman Ted Burton and senior shortstop Riley Bertram home off a double to center field. This scored the Wolverines their second and third runs of the game. The fourth and fifth came off another double, this time from senior first baseman Jack Van Remortel.

After Powers retired the first three batters in order in the top of the second, the Wolverines would score another run in the top of the third. After a single through the left side by Obertop, Powers walked Flores on to first. Then, a follow up double from Frey allowed for Obertop to score.

UM wouldn’t be able to score another run before Powers was relieved in the top of the fifth. He ended the day with a 5.83 ERA. He pitched for 4.2 innings, giving up seven earned runs on seven hits.

Junior pitcher Wyatt Rush stepped up to the mound for the Spartans. Despite needing just one more out to end the fifth, the Wolverines ran one more home. Van Remortel hit a double to left field, which sent Obertop in. Even though Rush pitched for the double, the run would count against Powers’ ERA.

The Spartans weren’t able to put a runner on base until the top of the fifth when freshman catcher Bryan Broecker walked to first. However, the first hit for the Spartans came in the bottom of the sixth inning with a single by sophomore second baseman Trent Farquhar.

Farquhar’s single was soon followed up by a double down the third base line by sophomore center fielder Jack Frank. The double ran in Farquhar and sophomore shortstop Mitch Jebb, who walked to first earlier in the inning. At the end of the sixth, the Spartans closed the score gap to 7-2.

In the top of the eighth, after walking Burton, Rush stepped down from the mound. He ended the game with a 4.38 ERA, giving up five hits and no runs. To relieve him, the Spartans sent up junior Andrew Carson.

In the bottom of the eighth, the Wolverines relieved their starting pitcher, junior Cameron Weston, and brought in junior Jacob Denner to close out the rest of the game. Weston pitched for seven innings, giving up only two earned runs on two hits.

Despite loading the bases in his first inning, Denner retired the side without giving up any runs for the Spartans.

Andrew Carson did not fare so well in the top of the ninth. With two outs, he looked to give his team as much of a chance as possible to even the score in the bottom of the inning. However, having walked Bertram in the second at-bat of the inning, Carson gave up one final RBI on a double to left field by Frey.

With one final 1-2-3 inning in the bottom of the ninth, the Spartans ended the game trailing 8-2. The two teams play again Sunday at McLane Stadium with first pitch scheduled for 1:05 p.m.