Takeaways from the 2022 spring game 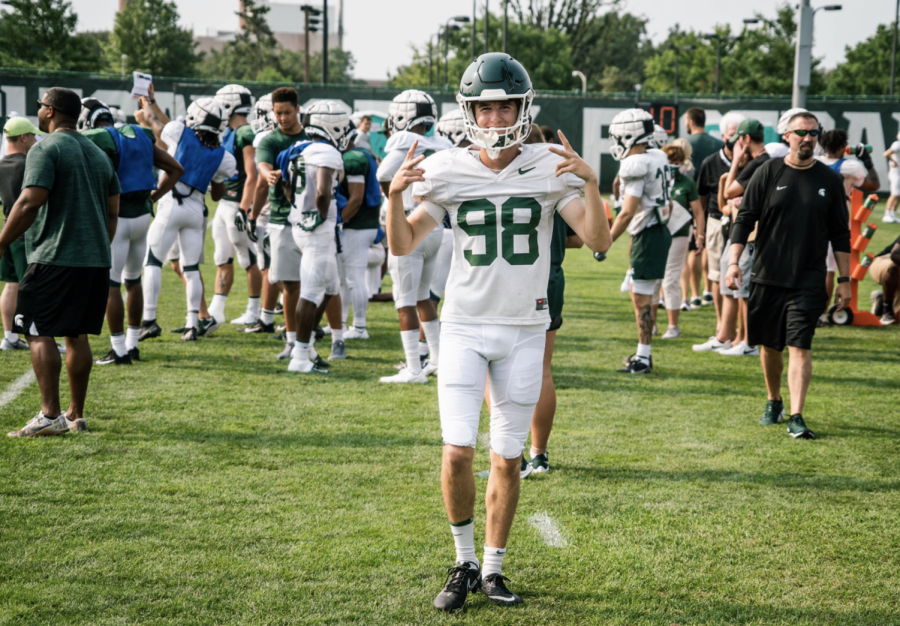 EAST LANSING, Mich — The Michigan State Spartans hosted their annual spring game on Saturday with a plethora of potential recruits and fans in attendance. Though the “open practice” consisted mainly of individual drills, there were still a few highlights that prompted some questions heading into the summer. Here are three takeaways from today’s game.

One of the most underlooked areas on a team is special teams, but Michigan State had a remarkable year last year in that department. The play of punter Bryce Baringer saw the Spartans lead the Big Ten Conference in average yards per punt and fifth in net yards per punt. Baringer will be back for his final year of eligibility.

However, the heir to the Matt Coghlin throne is a question that will need to be answered heading into August. The Spartans were 12th in the Big Ten in field goal percentage last season, with Coghlin making 63% of his field goal attempts. Coghlin, who became MSU’s all-time leading scorer in his final season, was also important for his kickoff abilities.

Michigan State ranked eighth in the Big Ten in average kickoff yards before return. However, the big statistic to note is touchbacks. While Coghlin was healthy he had 41 touchbacks on 53 kickoffs.

When Coghlin got hurt, freshman Stephen Rusnak stepped in for kickoff and field goal duties. However, Rusnak had only four touchbacks out of his 20 kickoffs attempts.

Touchbacks are usually a kicker’s stat but it is very important for field position. The Spartans averaged a six yard difference in average kickoff yards between Coghlin and Rusnak. Though this is small to most people, it can easily turn on a team for field position. This will be important if the Spartans have some growing pains early in the season due to a new offense that isn’t as reliant on the running game.

The sophomore out of Opelousas, Louisiana will have the opportunity to fill the void left by departing wide receiver Jalen Nailor who started nine games and amassed 695 yards and six touchdowns last season.

Coleman, who had just one touchdown last season, was taking first team reps during today’s game and looked good as an outside receiver. Coleman is having to battle for time inside a stacked receiving corps that returns starting wideout Jayden Reed and Tre Mosley. Both Reed and Mosley also took a majority of the first team reps on Saturday.

Coleman is in a good spot to take on a larger role on the first team with Nailor having declared for the NFL draft after last season. He does not necessarily need to put up similar numbers to Nailor’s, due to the Spartans’ depth, but having him as a starting receiver will allow MSU to fully utilize Reed on the other side who will most likely attract opposing team’s best corners.

With that in mind, Coleman could be in store for a breakout season since the Spartans are going to utilize their receivers more with the loss of their Doak Walker Award winning running back, Kenneth Walker III.

That brings about the last takeaway from Saturday’s spring game: What does MSU do with its running back room?

On Saturday, Jalen Berger, who transferred to MSU from Wisconsin, took a majority of the first team reps. With the addition of Jarek Broussard over the summer, the Spartans will have a tough running back room.

But the Spartans can afford to run three backs.

Michigan State has the opportunity to run multiple backs at opposing teams next season, if they can get a cycle of at least three backs going. There is no trouble having Broussard and Berger as the one-two punch, but having a third option gives the Spartans more flexibility. But who will take up that role?

Simmons did not have the best of seasons, but has the ability to establish himself as the third back if he can improve his vision. The Spartans have speed and power but they can use Simmons in a utility role as a run-pass option if they can fully utilize the rest of the backfield.

If MSU can get the running game going with a plethora of running backs, they will be able to fool some defenses and dive more into the passing game with senior quarterback Peyton Thorne at the helm.

Michigan State will kick-off its 2022 season on Sept. 2 when it hosts Western Michigan at Spartan Stadium.