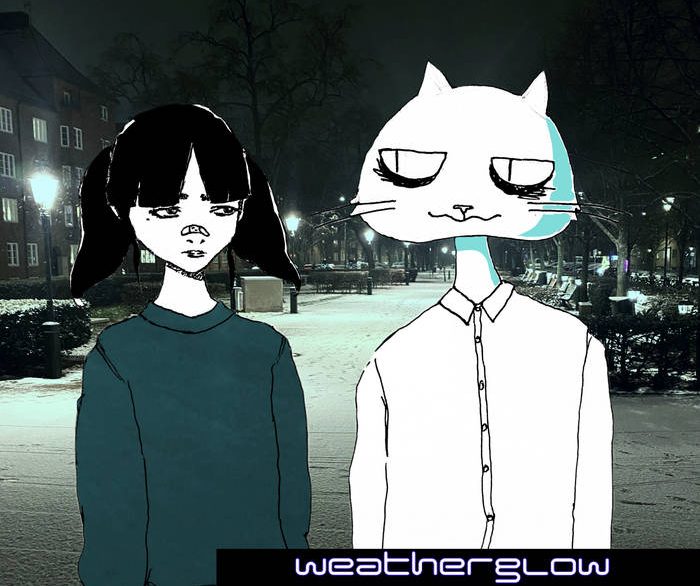 Few have defined the dynamic and abstract eruption of experimentation within DIY in quite the way Sputnik and Gyungwon Shin have with their musical output.

But a short time ago, the helm of DIY was championed by the honey-glazed twinkle of sunset-looking suburbanites musing about smoking weed, lost love, and good friends. The lighting in a bottle seemed to be repeatedly captured throughout the 2010s, carving a feel bad/feel good niche that was as fun as it is impossible to distill in a single sentence.

However, that utopian, saccharine ethos of production and songwriting seems to be falling out of favor as DIY has become increasingly digital. Rediscovered, retrospected and revived. The bastions of the midwest and Philadelphia scenes, while more alive than ever, have become less of a Mecca with the increasing popularity and proliferation of DIY bands.

Oftentimes, the fate prescribed to even fourth wave bands was a zenith of popularity, and the sun setting eventually on a golden reminiscence of a past epoch. While the music often exuded a youthful, naive exuberance of the worlds around them, these emotions within the music would linger far longer than the acts themselves. Social media seems to be slowly changing that narrative however, with some scene staples like mom jeans., Hot Mulligan, and American Football being more popular than ever — quite the different outcome opposed to fading into obscurity like most scene greats of a bygone era.

Now that these acts have gained a more prominent name in the greater pop scene, who is left to take their place on the midwestern masthead? Where does that leave DIY if fundamentally changed in a rather short span of time?

I don’t have an answer to that, quite honestly. But you could say a turning point was 2019’s Come In. This record by Weatherday seems to have been one of the foremost examples in modern DIY of a release creating a ripple effect in immediacy.

The use of noise, long, multi-structuralism, was polar to the pop sheen of their contemporaries. Slowly but surely, many new acts have embraced exactly what Sputnik laid out with their record. Not only that, but Come In was a rare example of a non-American musician creating a foothold in an otherwise Americentric genre.

In 2020, 2021, and now 2022 – DIY seems to be on a very different path. Parannoul took the underground by storm with the release of To See The Next Part of the Dream, another record breaking the border barrier and finding a domestic audience. Asian Glow’s Cull Ficle has all but been cemented as a DIY future classic, doubling down as a love letter with an expansive repertoire of the genre, as well as many coalescing influences from outside.

Even through the lens of domestic output from American contemporaries like Your Arms Are My Cocoon, STOMACH BOOK, Summer 2000, and Home is Where — this shared ethos of experimentation is something that transcends language. DIY is no longer quintessentially American.

Beyond the fifth wave mission statement that Asian Glow outlined with their friends Parannoul and sonhos tomam conta in Downfall of the Neon Youth, Asian Glow’s continued artistry shows their past discography to be less of a statement, and more so a call to action.

A call to action that was not only acknowledged, but reciprocated by arguably one of the biggest voices in the independent scene.The latest EP of Weatherday and Asian Glow, aptly entitled Weatherglow is yet another dynamic, genre-bending record that scratches the surface of how much ground DIY has left to cover. While I could spend hours talking about the sheer brilliance that this release encapsulates, I think the middleground of their artistry is best exemplified in “Jet.”

The heavyweight strum of overblown chords is pronounced and thick. In each blow, dissonance so metallic it conducts the static in the air, making your hair stand on end; a fiery ignition that propels you towards the moon. Bellowing whips of smoke extending from below a pearlescent flame. This napalm of discharge sticks to everything in sight; a piercing, phosphorescent kinesis of sound. A magical levitation of grain ensues, as the air solidifies into pellets and falls at your feet.

cathartic heat comes through our mind /

All the figures couldn’t stand /

couldn’t get any signals /

stand for the signs /

The rippling miasma of noise hovers over the instrumental. The serrated, chaotic mathy riff continuously collapses in the background, contrasting the slow delivery of the vocals. The sluggish extrusion of the lyrics (a trademark of Asian Glow) creates a clear understanding of the manipulation of sound, acting as a display of the various effects that Weatherday and Asian Glow indulge themselves in.

The guitar’s infinite tether untangles itself, transforming into a punchy, shrill riff of pure cosmic energy before eroding against the clipping high end of snares and hi-hats in a white hot explosion.

lost in the game I made /

Half of day I tried /

While not stand, came understand /

something’s combusting messier than I remembered /

Sleeping on looking back”

This antithetical instrumental dichotomy channels the shared appetite for frenzy and rumination between the two. The dampening of emotion creates the sense of understanding between each other — a shared language of sound between Weatherday and Asian Glow too esoteric for you or I to understand. Against all odds, the pieces exist in perfect harmony with each other.

The arpeggiating bitcrush dissipates, completely pacified by the anxiolytic

tempo, and blankets the earth in a cleansing mist. Sputnik’s vocals become more pronounced in the mix — creating a smoother, softer androgynous presence in the squall of noise.

Nothing on my mind, as if it’s what you want /

All the figures couldn’t stand /

The leisurely pluck of melodic guitars lifts up the percussive highlights, creating a gliding mix that slowly parachutes to the tarmac. Each wing suspended in a sustained release that expels the emotion outside of your body. The audio swaps to the wistful strums of a lonesome guitar, perfectly jumpcut to the emotional progression of the song. Falling action as a graceful landing.

These lo-fi improvisations almost echo the very beginnings of such a dynamic duo — the ametuer recording of a guitar and the will to create something greater than themselves. Each echo of the chords stretching into the sunset. The audio cuts; it’s all over.

The wheels hit the cement below, reuniting the sky with the horizon.  You may not be in the air anymore, but regardless you’re levitating.

“Jet” is as fast paced, destructively potent and futuristic as one might assume, and it’s clear to me that their contemporaries have a lot of catching up to do; Weatherglow has broken the sound barrier.