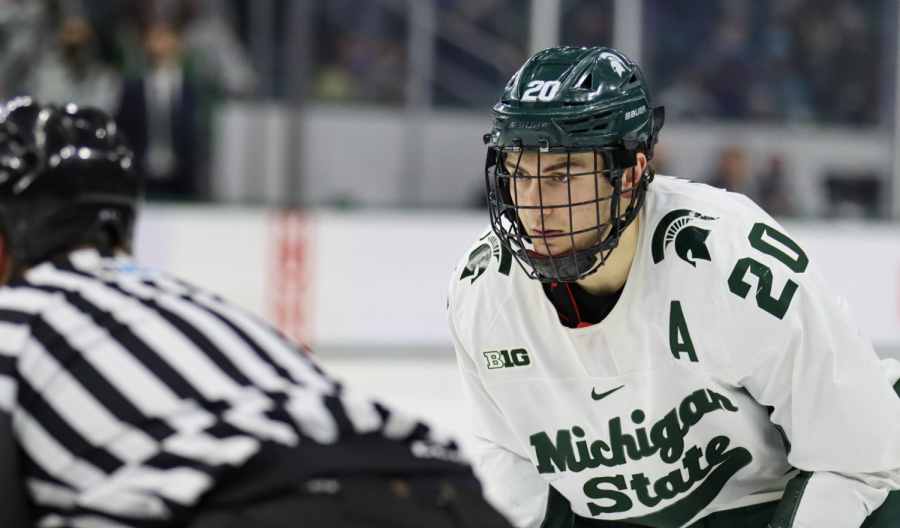 On Friday afternoon, junior forward Josh Nodler entered the transfer portal. The Oak Park native is the fifth Spartan to enter the portal since the conclusion of the 2021-22 season, following goaltender Drew DeRidder, forward Adam Goodsir and defensemen Christian Krygier and Aidan Gallacher. DeRidder has since transferred to North Dakota.  Gallacher, meanwhile, entered the portal on Thursday, March 30.

Nodler was one of the best offensive weapons for the Spartans this past season, notching 15 points and seven goals in 36 games. He also compiled 11 points as a sophomore, the third-best mark on the team, and eight points as a freshman. Nodler scored three goals each as a freshman and sophomore.

Overall, he has compiled 34 points and 13 goals in 99 career games for MSU.

With Nodler in the portal, MSU’s roster is getting increasingly thin with players entering the portal and several seniors set to graduate (forwards Mitchell Lewandowski and Mitchell Mattson as well as defensemen Cole Krygier and Dennis Cesana). The roster upheaval is not a good sign for head coach Danton Cole, who is in desperate need of a successful upcoming season.

In five years as MSU’s head coach, Cole has never had a winning season, won a conference tournament game or finished above sixth in the Big Ten. The Spartans have finished last in the conference in four out of the last five seasons.