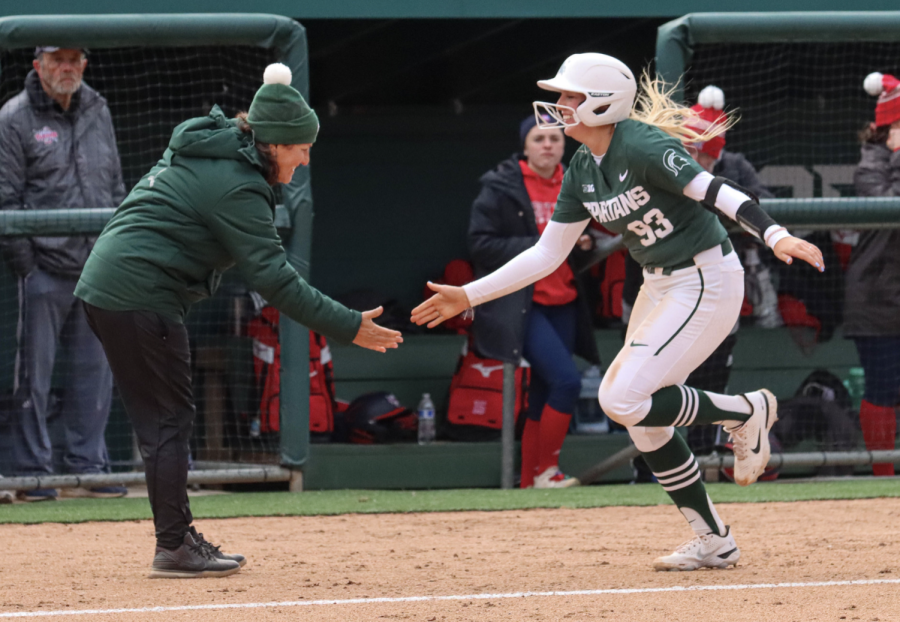 EAST LANSING, Mich— Following a three-game series sweep at the hands of Northwestern, Michigan State team welcomed in Detroit Mercy to Secchia Stadium on Tuesday for a doubleheader.

Behind strong pitching the Spartans were able to come away with the two-game sweep, heading into a matchup with Toledo on Wednesday, and Ohio State over the weekend. Outscoring the Titans by a combined 7-2 margin, the Spartans pitching held steady, limiting Detroit-Mercy to six hits over the course of the series.

The Spartans started off game one fast, putting a run up in the first inning following a three-up, three-down half of the inning from starting pitcher junior Sarah Ladd who entered the game with a 5-4 record. Camryn Wincher got things started for the Spartans with a single shot back up the middle, scoring Courtney Callahan. Callahan drew a walk in her at bat, advancing to second on a stolen base before shooting around third for the Spartans first run of the game.

From then, until the sixth inning, a pitchers duel ensued, with S. Ladd of the Spartans and Liz Murphy of the Titans shutting down the lineups of their opponents in polar opposite fashion. Ladd threw heat and had many Titan batters swinging, striking out nine between the second and sixth inning. Murphy, until the bottom of the sixth, held Spartan batters scoreless.

First baseman Camryn Wincher got the lineup going again when she doubled about two feet short of going over the wall for a home run on a two-two count. A walk and an out gave MSU a runner on third, Wincher, and a runner on first, Alexis Barroso. Caitie Ladd then broke the gap in left-center with a single, and Wincher scored, with Barroso ending up on second.

An error led to Barroso and Ladd ending up on second and third, respectively. The Spartans left the bases loaded following a walk, which was a sticking point for the game. In total, six runners were left on base over the first game for MSU.

The Titans didn’t start slow this time around, with shortstop Taylor Gauthier leading off with a hit. They were unable to score her, and both pitchers held steady and their opponents scoreless until the bottom of the second.

Ladd kept her hot bat swingin’, leading off the bottom of the second with a single before Kayleigh Roper sent a two-out missile into center field. She broke a pretty sizeable tree branch, giving the Spartans a 2-0 lead.

The Titans responded immediately with a one-out double from LF McKenna Tanguay, scoring one run, and shortening the gap to 2-1. The Titans brought in a pinch-runner and the Spartans went for a pitching change and brought in freshman Faith Guidry. A defensive error from the Spartans allowed the Titans to score another run, and tie the game at 2-2. Guidry held on and limited the damage, ending the half-inning with a strikeout.

A Macy Lee double that rolled all the way to the warning track scored Courtney Callahan and regained the lead for the Spartans a half-inning after it lost the lead.Faith Guidry and Chloe Spitzer held the Spartans and Titans scoreless until the Spartans scored two insurance runs in the bottom of the sixth, putting MSU up 5-2.

Faith Guidry, like Sarah Ladd in the top of seventh inning the game prior, made quick work of the Titans, and MSU moved to 18-13 (0-3 Big Ten) following its sweep.

Wednesday March 30, the Spartans (18-13) pick up action again, hosting the Toledo Rockets (8-16) at Secchia StadiumFirst pitch is scheduled at 5 p.m.

The Rockets have already been entrenched in conference play, completing two series in MAC  play prior to the one-day matchup with the Spartans. Toledo is on a three-game losing streak, dropping a doubleheader to Western Michigan two weeks ago, prior to losing to Buffalo last week. The remainder of the Rockets series with Buffalo was canceled due to weather conditions. Toledo is set to play in East Lansing with a 0-4 record against Power Five opponents.

MSU enters the game on a two-game win streak, following its sweep in a doubleheader Tuesday evening against Detroit Mercy. MSU rode its pitching to both victories, holding the Titans to two runs over both games, while scoring seven runs. This will be the Spartans lone game prior to its weekend matchup with Ohio State.