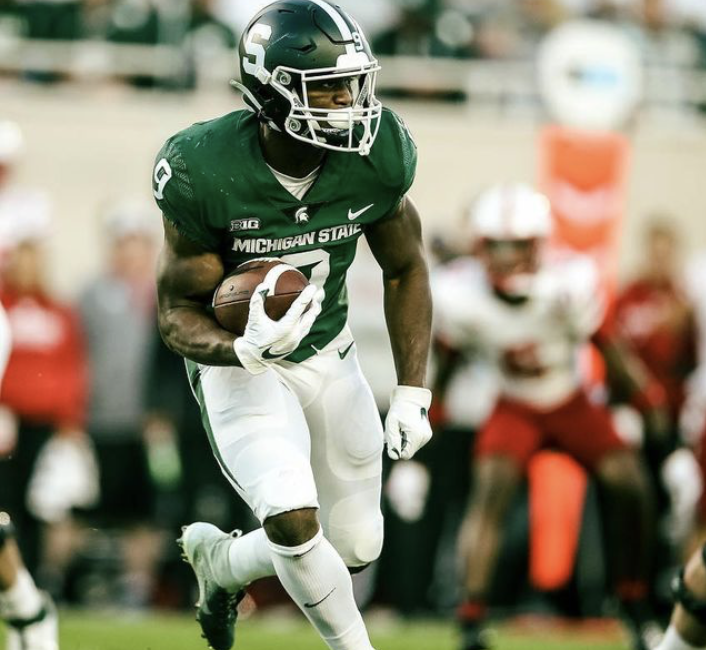 The 2022 NFL Draft is just about a month and a half away, but the attention is not currently on the incoming rookie class. The free-agency period has been one of the most hectic and constantly-moving couple weeks in recent memory. With superstars like Russell Wilson and Davante Adams finding new homes after long careers with their previous teams, the landscape of the NFL is going to look vastly different at the start of next season.

The offseason frenzy should get even more interesting come Draft Day, as things are shaping up to be one of the more wide-open drafts in a while. There is no top-flight quarterback like Trevor Lawrence or Joe Burrow, but there is a lot of depth throughout the entire draft. The Jacksonville Jaguars hold the No. 1 overall pick and could go with an elite pass rusher or an offensive tackle to protect their quarterback Lawrence.

The NFL Draft Combine gave prospects a chance to showcase their athletic skills. Players like Jordan Davis and Breece Hall increased their draft stock with solid performances. Let’s take a look at how the first round of the NFL Draft could shake out after the Combine:

The Jaguars could elect to take an offensive tackle to protect Trevor Lawrence here, but they opt to form a scary pass-rushing duo in Hutchinson and Josh Allen. It’s not likely that they would take someone like Evan Neal or Ikem Ekwonu after franchise-tagging Cam Robinson and signing Brandon Scherff.

This could be a bit of a shock, but reports are that the Lions love Malik Willis’ potential. He has great mobility and a rocket arm, and could benefit from sitting and learning the playbook for a year while Jared Goff starts. The Lions take Willis with the idea of making him their franchise quarterback.

The Texans are moving forward with Davis Mills as their franchise quarterback after trading Deshaun Watson, so they will need someone to protect him. Ekwonu is a monster in the run game and can play almost any position on the offensive line. He adds to a line that already features a two-time Pro-Bowler in Laremy Tunsil.

Evan Neal is the best player in the draft class. He’ll fall to No. 4 here, but that doesn’t reflect his talent level. The Jets are not as in love with Mekhi Becton as they once were, and Neal could eventually replace him as their left tackle. At worst, Neal slides to right tackle and Becton remains at left tackle, which forms a nearly unstoppable duo.

Is Travon Walker a defensive end? Is he a defensive tackle? Is he both? The Giants don’t care, as long as he’s getting after the quarterback. Walker is a guy who did well for himself at the combine, so well, in fact, that it appears unlikely he falls out of the top five.

The Panthers need to address the quarterback position, but they don’t like any of the options, so they bolster their offensive line. Cross isn’t the best lineman in the draft, but he isn’t far behind Neal and Ekwonu. He’s the best pass-protector in the class and can become the Panther’s franchise left tackle.

Sauce Gardner is the first defensive back to come off the board, and the Giants would solidify their defense after getting a lineman with their first pick. Gardner did not allow a passing touchdown in coverage while at Cincinnati, and he becomes the face of the Giants’ secondary here.

The Falcons have holes at every single position. Adding a safety doesn’t exactly make their defense elite, but Hamilton is more than just a safety. He can play all over the field, consistently makes the right plays, and could be a defensive cornerstone, which is just what the Falcons could use.

The Seahawks could opt to take their quarterback of the future, but they instead go for a guy who will get after the quarterback instead. Johnson, a 6-foot-5, 262-pound end who was a bit of a late bloomer, saw his draft stock rise after a stellar season at Florida State. He recorded 11.5 sacks and 17.5 tackles for loss. He becomes the Seahawks’ new No. 1 pass rusher.

Kayvon Thibodeaux was viewed as a potential No. 1 overall pick before the season, but inconsistent play and injuries played a factor in his fall to just inside the top ten. However, Thibodeaux still has the traits of a superstar pass rusher. He’s fast, strong, and has good hands. When he’s locked in, he’s nearly unstoppable.

The Commanders will need to put a couple weapons around new quarterback Carson Wentz. They already have a few successful Ohio State receivers on their roster, and Wilson would be the next Buckeye in that lineage. A crisp route-runner with 4.3 speed and sure hands, Wilson would add to a spectacular receiving corps with Terry McLaurin.

If Derek Stingley Jr. didn’t suffer a serious foot injury earlier in the season, he would have easily been a top-five pick. He lands with Minnesota here, who hasn’t had much success in the first round with cornerbacks recently. Stingley’s talent is worth the gamble, though.

Part of building around Davis Mills is adding pass catchers, and Williams is the best one in the class. He falls behind Wilson in this draft, however, because of the torn ACL he suffered in the National Championship game. If his medicals come back clean, Williams is a blazing fast receiver and would give the Texans a big time vertical threat.

A physical marvel, Davis posted absurd numbers at the Combine and his Pro Day. Standing at 6-foot-6 and weighing 340 pounds, Davis moves faster than people that size should. He becomes a terrifying presence on the Ravens’ defensive line.

The first of the Eagles’ three picks in this round, McDuffie is a corner who doesn’t shy away from physicality and is sticky in coverage. He adds to a defensive back room that includes Darius Slay, who is coming off of a career year.

The first linebacker to come off the board, Lloyd is a bit of a tweener in the sense that he can play safety and linebacker, also being able to play off the edge and rush the passer. The only thing the Eagles see, however, is someone who can play all over the field, and play well at any position.

The Chargers took All-Pro Rashawn Slater in last year’s draft, which proved to be an excellent pick. They double back for another tackle to protect Justin Herbert even more with Penning, who plays with a nasty edge to his game.

The Saints’ biggest problem last season was a lack of pass catchers. Adding a big body like the 6-foot-3 Burks can help alleviate that problem. Burks caught 66 passes for 1,104 yards and 11 touchdowns. With Jameis Winston back in the fold, Burks gives him a shiny new weapon.

The Eagles might soon be moving on from longtime center Jason Kelce, whose career is in its final act. They go with Linderbaum here, who won the Rimington Trophy for best center in the nation, and he can immediately stabilize the Eagles’ offensive line like Kelce never left.

Assuming the Steelers don’t trade up and play the board, Pickett could end up in their laps at No. 20. Pickett burst onto the scene in 2021, throwing for over 4,300 yards and 42 touchdowns. He becomes the heir apparent to Ben Roethlisberger.

The Patriots will have to replace JC Jackson, who got big money from the Chargers. They’re lucky Booth falls to them, as he is probably a top ten talent in this draft who hasn’t gotten a lot of attention. Booth is a taller corner who plays more physically than almost any defender in this class.

In an unprecedented offseason, the most unpredictable move of all comes from the Packers taking a wide receiver in the first round. It’s necessary now that Davante Adams will be in Vegas. London is fully recovered from his ankle injury and will fit right in with Aaron Rodgers.

The Cardinals need to protect Kyler Murray better, and Kenyon Green is the best choice at this point in the draft. Green is the most athletic lineman in the class, being able to play any position on the line.

The Cowboys just lost Randy Gregory to the Broncos, so they will have to add a pass rusher. Karlaftis is relentless and versatile, being able to play off the edge and inside to stop the run. He makes a great duo with Micah Parsons.

It’s likely Devonte Wyatt won’t be available at this point in the draft, but he is here, and the Bills are thankful for it. Wyatt was an absolute disruptor for the Bulldogs last season, and pairing him with Ed Oliver is a nightmare for anyone’s run game.

The second of two Buckeye receivers in this draft, Olave might be just as good of a route runner as his teammate Wilson. The Titans just traded for Robert Woods, but it wouldn’t hurt to add Olave to Woods and A.J. Brown.

The Buccaneers have the luxury of not needing to hit on this pick, but they certainly do by taking Dean here. Dean was one of the most important players on one of the best defenses of all time, and he adds to an already great group of linebackers in Tampa Bay.

The Packers took a safety a couple years ago when they drafted Darnell Savage Jr. in 2019, but they can’t pass on Hill here. Hill had a great season at Michigan last season, posting 42 tackles and two interceptions. The Packers can bolster their defense with this pick.

After trading away Tyreek Hill, the Chiefs will need to reload at wide receiver. They go with the explosive Dotson here, adding to JuJu Smith-Schuster and Marquez Valdes-Scantling, so Patrick Mahomes doesn’t feel the absence of Hill as much.

Ojabo tore his Achilles at his pro day, but the Chiefs still take the gamble on him in the first round because his talent is worth it. If he can fully recover, Ojabo is a ridiculous athlete with a high ceiling. The Chiefs can afford to wait until he’s healthy.

The Bengals added to their offensive line, so it’s less of a need now. The linemen at this point in the draft aren’t worth taking with this pick, so they go with a player on the other side of the line. Winfrey won the Defensive MVP award at the senior bowl, and he adds another piece to a Bengals defense that was exceptional in the postseason.

The Lions suffered from some poor linebacker play last season, so they will need to add one here. Harris was one of the top players on a great Alabama defense, and pairing him with Derrick Barnes makes for a good duo for the future in Detroit.