Spartans give Blue Devils all they can handle, but fall late in 85-76 loss as season ends 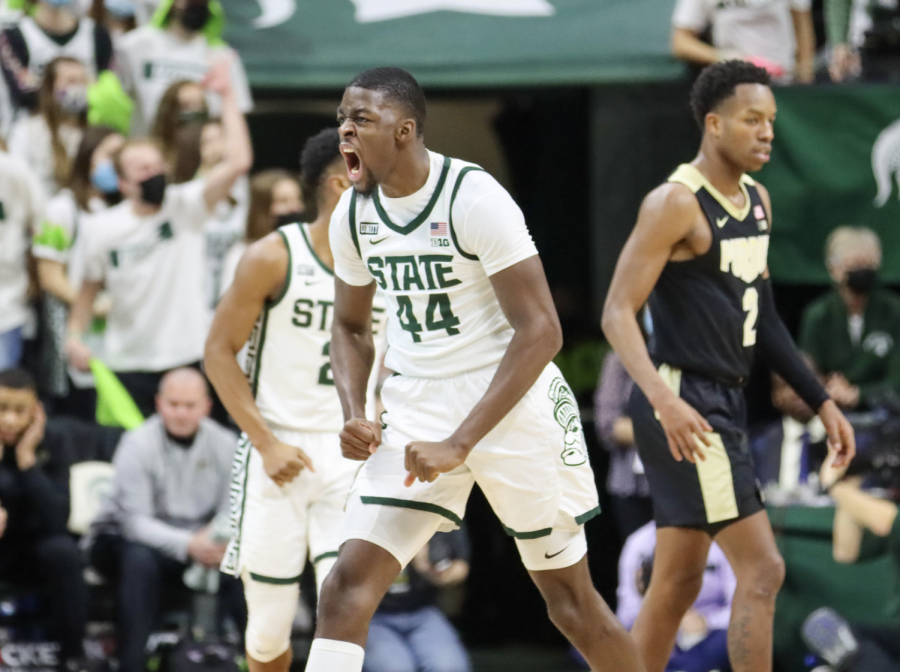 GREENVILLE, S.C. – Anticipation had perhaps NEVER been higher for a game in the second round of the NCAA Tournament on Sunday. The stage was set a week ago that if the No. 2 Duke Blue Devils and No. 7 Michigan State Spartans each took care of business in the Round of 64, we’d see a blue-blood clash with the lights as bright as can be.

Would Mike “Coach K” Krzyzewski continue his last dance? Or would Tom Izzo’s trademark March identity shine brighter? The basketball gods decided it would be the former, as Duke closed the hotly-contested battle on a 13-2 run to grab the 85-76 win.

The Spartans came to play on defense, blocking four shots in the first nine minutes, two of which were made by the program’s all-time leading shot-blocker, Marcus Bingham Jr. The underdogs also started the game with more of a spark on offense, taking an early 16-13 lead.

The Blue Devils then scored 10 unanswered points during a stretch in which the Spartans missed 11 shots in a row. Julius Marble II stopped the bleeding with a second-chance layup.

Then, it started raining threes in Greenville. Seven of the next eight shots made in the game were threes. Potential No. 1 NBA draft pick Paolo Banchero hit two of them for Duke, while MSU senior captain Gabe Brown nailed three of them en route to his 14-point first half to lead all scorers at the break. But it was the Blue Devils taking a 39-35 lead into halftime thanks to a Mark Williams slam with four seconds before the horn.

The Blue Devils opened the second half with some easy offense, stretching their lead up to nine points. The Spartans were able to fight back thanks to threes from Max Christie and Tyson Walker. But Duke was able to keep pace, holding a 61-57 lead with 9:17 minutes to play as Krzyzewski called a timeout to prime his guys for the final stretch.

Back-to-back dunks from Bingham and Brown electrified the Michigan State crowd that was a minority in the building, as the Spartans cut the Duke lead to two. During the commotion, Duke freshman wing AJ Griffin suffered a lower leg injury, prompting an injury timeout that ended with him being helped to the bench.

With just over six minutes to play, A.J. Hoggard tied the game with a pair of free throws after a gutsy take. After Banchero missed the front end of a 1-and-1 opportunity, Walker pulled a stepback three and drilled it to give the Spartans their first lead since the first half.

The Blue Devils were unfazed, buckling down on defense, and after a Banchero layup through contact, they retook the lead at 75-74. Izzo then called timeout, and coming out of it, Hauser was blocked by Banchero on a drive.

With 76 ticks left on the clock, Jeremy Roach connected on a left-wing three over the outstretched contest of Hoggard. With Duke taking the 78-74, Izzo called another timeout with 1:07 to play.

Out of that timeout, Christie threw the ball right to Wendell Moore Jr. who charged on the break to get fouled by Brown. He stepped to the line for a 1-and-1 chance, and converted both free throws to put Duke ahead 80-74 with 59 seconds remaining. Despite a late scoop-and-score from Walker, the Spartans were unable to overcome the late deficit, forced into playing the foul game.

The Blue Devils’ 13-2 run over the final 2:44 is what won the game. Banchero led the way with 19 points, seven rebounds and four assists. Moore, Roach and Williams each had 15 points, too.

For the Spartans, Brown led with 18 points while Bingham turned in 16 points, 10 boards and three blocks in what is likely each of their final games in an MSU jersey.

And so, the Spartans’ season ends in the Round of 32, while Coach K and the Blue Devils go marching on.