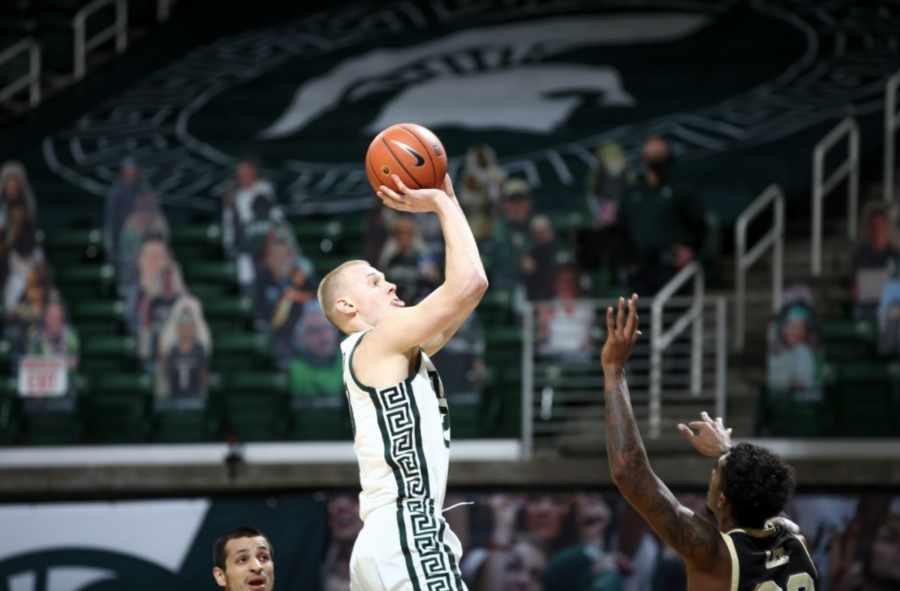 GREENVILLE, S.C. – In one of the final matchups of the Round of 64, the No. 7 Michigan State Spartans went to battle with the No. 10 Davidson Wildcats for the first time in history. And with Davidson less than two hours north of Greenville, Bon Secours Wellness Arena was jumping through the roof for the “home” team.

Against what felt like all odds at times, the Spartans were able to bear down when they needed it most. The result? A resilient 74-73 win, earning the Spartans a dance with the No. 2 Duke Blue Devils in the Round of 32 on Sunday.

“It’s a new season, that’s the beauty of this tournament,” said MSU senior Joey Hauser, who led all scorers with a spectacular 27 points (9-for-12 shooting) and eight rebounds.

The first half was tight and featured a very similar showing from the two squads. The Wildcats shot 46 percent from the floor while the Spartans shot 45. Each squad knocked down four 3-pointers, too, and turned the ball over five times apiece.

The biggest storyline coming into the game was undoubtedly centered around Foster Loyer, Davidson’s starting point guard and leading scorer, who transferred there after three seasons playing at Michigan State. The Spartans held him in check in the first half, as the 16-points-per-game scorer was held to four points (1-for-4 shooting), and he airballed his first attempt of the game.

On the other side, the questions were all about MSU junior floor general Tyson Walker, who made his NCAA Tournament debut in this one after transferring from Northeastern before the season. He rolled his ankle early in the Spartans’ final Big Ten Tournament game against Purdue and was only able to play three minutes in that loss. Against Davidson, he came off the bench to play just over 10 minutes in the first half and scored his first points at the 3:40 mark with a mid-range jumper as the shot clock expired.

Sam Mennenga, the forward from New Zealand, led the Wildcats in first-half scoring with 10 points to go with four boards. For the Spartans, the early offense was all Hauser, who shot 5-for-5 (2-for-2 from deep) in the first half. He helped will the Spartans to a 32-31 halftime lead.

The opening sequence of the second half remained back-and-forth. Hauser finally missed a shot at the 12:24 mark, leaving a three from the top of the arc short.

The Wildcats then went on a scoring run of their own and tightened up on defense to stymie the Spartans and take the lead with just under seven minutes to play.

Then, right on time, the Spartans pulled the curtain back to reveal their true March identity.

Hauser and Gabe Brown hit back-to-back threes to put the Spartans ahead by three, kickstarting a 13-3 run for the Spartans. For the first time of the night, the MSU fan-base really came alive as the “Go Green, Go White” chants convincingly took over the crowd.

“Our team overall, we were just focused,” A.J. Hoggard (14 points) said. “We knew what was on the line, it’s one-and-done time. So we just gave it our all and fought back.”

It wasn’t smooth-sailing, though, as the Wildcats connected on three 3-pointers in the final 37 seconds after a converted and-one from Loyer to make things really interesting.

The Spartans were simply able to break the press that almost caused them to fumble the game away against Maryland in the Big Ten Tournament. Despite not hitting a shot from the floor in the final 3:01, the Spartans hit 11 clutch free throws in that span and hung on for a thrilling, postseason win. Hitting free throws down the stretch were Brown, Hauser, Walker, Hoggard and Julius Marble II.

Other than Hauser and Hoggard, Brown turned in a dozen points while Marcus Bingham Jr. added six points, eight rebounds (three offensive) and a pair of blocks.

For Davidson, Luka Brajkovic led the charge with 18 points. Loyer was held to 12 points (six in the final minute) and 1-for-5 from beyond the arc.

Next up for Tom Izzo and the Spartans is this sixth all-time NCAA Tournament installment of MSU vs. Duke. The game tips off at 5:15 p.m. Sunday on CBS.