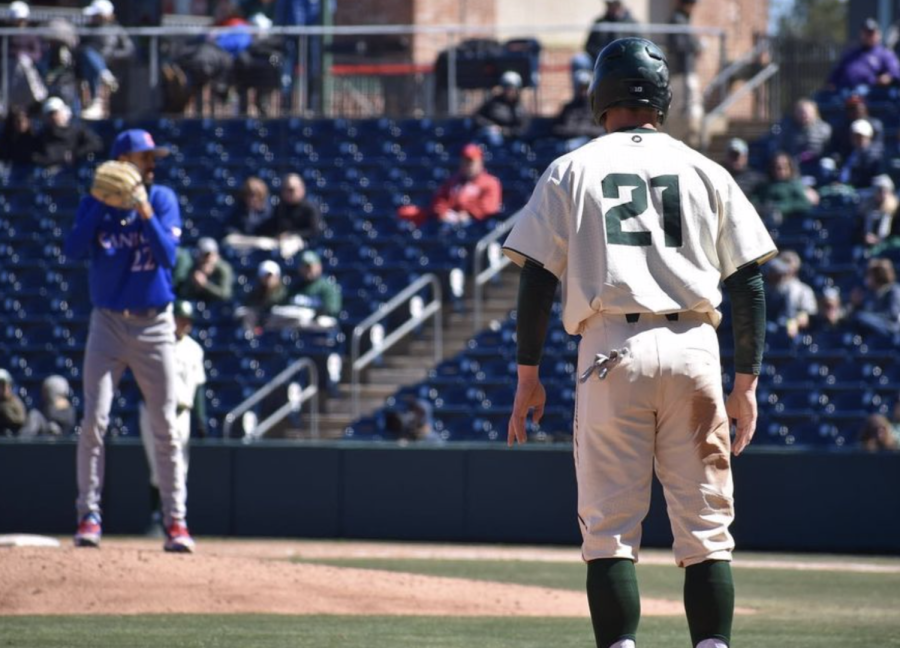 MSU outfielder Jack Frank gets a lead off of third base during the Spartans' 13-7 loss to Kansas on March 13, 2022/ Photo Credit: MSU Athletic Communications

Michigan State baseball spent its spring break in Greenville, South Carolina where it played No. 21 Clemson on Wednesday before competing in the First Pitch Invitational over the weekend. The Spartans went 2-2 in the week, losing to Clemson and Kansas while defeating Cincinnati and Western Carolina.

MSU had a tough test to start the week when it faced an 11-0 Clemson team. Strong pitching from both teams kept it close, but the Spartans would fall to the Tigers, 4-2. MSU starting pitcher Harrison Cook had his best performance of the season, going six innings, giving up one run and striking out nine Clemson batters.

Clemson took an early 1-0 lead in the third inning when right fielder Caden Grice had an RBI single off of Cook. The Spartans answered in the fifth inning when redshirt freshman catcher Bryan Broecker singled to center, bringing home Jack Frank and tying the game.

The score was still tied at 1-1 heading into the eighth inning where walks and defensive errors would cost the Spartans the game. The first three batters of the inning for Clemson reached base. Tyler Corbitt reached on an error by MSU shortstop Mitch Jebb, Grice was hit by a pitch and Cooper Ingle was walked to load the bases with no outs in the inning.

MSU coach Jake Boss went to graduate senior Kyle Bischoff to try and get the Spartans out of the jam. Bischoff struck out his first batter on three pitches and got his second batter to an 0-2 count. His 0-2 pitch grazed the arm of batter Max Wagner, allowing the run to score.

Bischoff struck out the next hitter for the second out of the inning. An error by MSU first baseman Peter Ahn on the next play allowed another runner to score, giving Clemson a 3-1 lead.

Clemson would add another run to its lead in the ninth thanks to another MSU error by pitcher Andrew Carson. In the bottom of the ninth, Zaid Walker and Jebb both reached base to start the inning, and Ahn would drive in Walker later on, but the Clemson bullpen shut the door as the Tigers defeated the Spartans 4-2.

MSU had a strong bounce-back performance on Friday afternoon, defeating Cincinnati 10-8 with an impressive performance from Jebb. He wasted no time to give MSU the lead, as he led off the bottom of the first with a solo home run.

Cincinnati outfielder Cole Harting tied the game in the second with an RBI double, but the Spartans would regain the lead in the bottom of the second with a sacrifice fly from Jebb and junior Casey Mayes, scoring two runners on a single to make it 4-1.

The Bearcats would go on to score seven unanswered runs, giving themselves an 8-4 lead in the seventh inning. MSU would make it an 8-5 game in the bottom of the seventh after Brock Vradenburg scored on a fielder’s choice.

After redshirt sophomore Brian Martin retired the Bearcats in the top of the ninth, the Spartans needed to get the offense going to overcome the three-run deficit. Back-to-back walks from Walker and Frank ignited the spark MSU needed. Broecker singled to load the bases before Ahn ripped the first pitch he saw into left field for a base-clearing triple and tied the game at 8-8. Jebb led off the game with a home run and ended the game with a two-run walk-off home run to right field, giving MSU a 10-8 victory.

MSU continued its winning ways on Saturday afternoon against Western Carolina. Led by stellar pitching, the Spartans defeated the Catamounts, 5-2. Sophomore left-handed pitcher Nick Powers started for MSU and shut down the WCU lineup, going six innings with 10 strikeouts and only allowing one run on four hits.

Junior right-handed pitcher Andrew Carson came in to relieve Powers. He worked through two innings, striking out three batters while allowing a run to set up Bischoff, who came in for the ninth inning and retired the Catamounts in order for his third save of the season.

MSU took a 2-0 lead in the fourth inning after WCU center fielder Bryson Parks made an error with two outs in the inning, which allowed two runs to score. The Catamounts answered with an RBI single in the fifth inning to make it 2-1.

The Spartans added to their lead in the bottom of the fifth with a Mayes RBI double, and multiple WCU miscues on defense allowed two more runs to score, giving MSU a 5-1 lead that WCU couldn’t come back from. The Catamounts would score a single run in the eighth, but the Spartans would hold on to win 5-2.

On Sunday, the Spartans faced a Kansas team that they defeated 11-2 the weekend prior in Minneapolis in the Cambria College Classic. The Jayhawks were determined to avenge their loss as they defeated the Spartans, 13-7. It was a high-scoring game, as the MSU pitching staff was pushed to its limits, playing its fourth game in five days.

Kansas opened the scoring in the top of the second when first baseman Cooper McMurray hit a two-run home run to give Kansas a 2-0 lead. MSU answered with three runs in the bottom half of the second as Broecker and Dillon Kark both had RBI singles before Jebb gave MSU the lead with a sacrifice fly.

The Jayhawks rallied to tie the game in the fourth, but Ahn hit a sacrifice fly in the bottom of the fourth to put MSU back on top, 4-3.

In the sixth inning, Kansas shortstop Maui Ahuna had a base-clearing, three-run double to push the Jayhawks ahead, 6-4. Kansas continued to rally in the sixth and seventh innings, scoring eight unanswered runs and taking an 11-4 lead.

MSU put together a two-out rally in the seventh with three-straight doubles from Trent Farquhar, Mayes and Vradenburg to make it 11-7. Kansas added two more runs to its total in the ninth to make it 13-7. The Spartans couldn’t spark a comeback as they dropped the weekend finale, 13-7.

MSU now sits at 7-7 on the year, and outside of the series at Abilene Christian, there is a lot to be impressed about with this team. The Spartans were picked to finish last in the Big Ten by Baseball America, but they have competed with two of the best teams in the country in Clemson and Notre Dame, showing this team is better than expected.

MSU will have its home opener this weekend against Houston Baptist, which is the Spartans’ last non-conference series before the start of Big Ten play. Houston Baptist comes into East Lansing with a record of 6-11 and was swept by Louisiana Tech last weekend, where the Huskies were outscored 40-5 in the three-game set. MSU and Houston Baptist will start the weekend series on Friday at 4:05 p.m.