PREVIEW: After knocking off No. 2 Wisconsin, here’s how MSU can knock off No. 3 Purdue 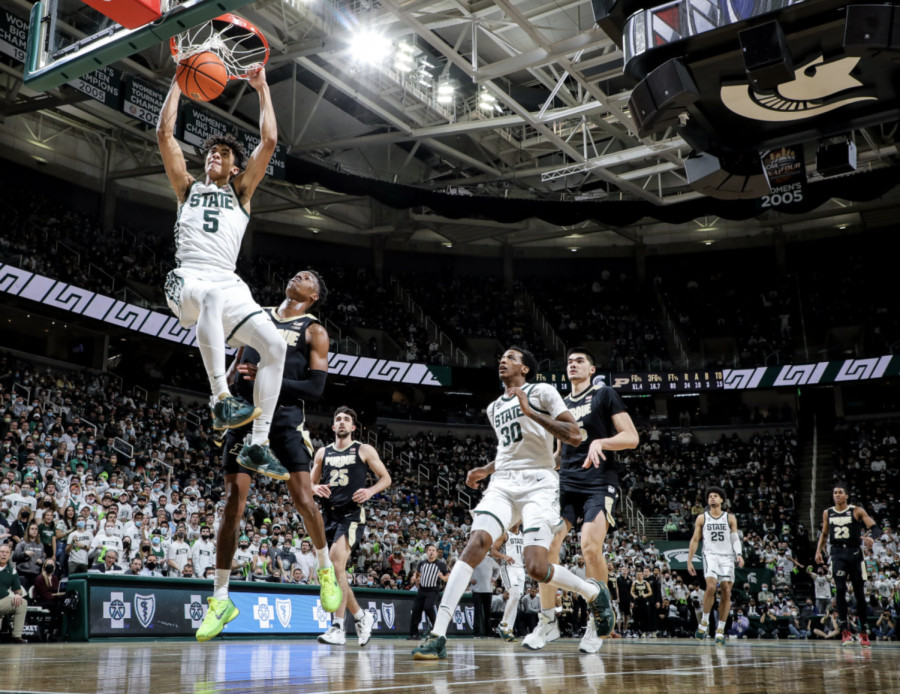 INDIANAPOLIS – This season’s Big Ten Tournament has been a pleasant surprise to those who subscribe to upset picks and enjoy Selection Sunday uncertainty. Despite the No. 1 Illinois Fighting Illini, No. 2 Wisconsin Badgers, and No. 4 Rutgers Scarlet Knights all losing Friday, the No. 3 Purdue Boilermakers reversed the trend on the final game of the night with a 69-61 win over No. 11 Penn State to advance to the Big Ten Tournament semifinals.

The Boilermakers are staring down a matchup with the No. 7 Michigan State Spartans, who found themselves here following a chaotic win over No. 10 Maryland and a gritty, defensive victory over the Badgers.

The Spartans and Boilermakers met once in the regular season, in a late-February matchup that featured Purdue at No. 4 in the AP Poll at the time. The Spartans won the contest 68-65 thanks to a Tyson Walker 3-pointer in the final seconds and seemingly punched their ticket to the big dance along with it.

Saturday, the Boilermakers seek revenge inside a Gainbridge Fieldhouse that will inevitably hold more Purdue fans than Michigan State, given the home-state advantage. Purdue has a top seed in the NCAA Tournament locked up, and while the Spartans are a surefire tournament team, their seed is still up in the air.

With that on the line, Purdue coach Matt Painter and Michigan State coach Tom Izzo clash Saturday. Here’s what the Spartans must do if they want to move to 2-0 over Purdue this season, and advance to a Big Ten Tournament final.
1. Keep the 3-point defense up
The Spartans boast the top 3-point defense in the Big Ten this season, and that was no different on Friday vs. the Badgers. Michigan State held Wisconsin to 29.2 percent from deep in Friday’s matchup.

Even more impressive was the 11.1 percent mark the Spartans held the Boilermakers to in East Lansing. Purdue has some great shooters, including likely NBA lottery draft pick Jaden Ivey and senior Sasha Stefanovic. It’s up to the Spartans to keep Purdue’s damage from the arc to a minimum.

Furthermore, Izzo declared at halftime of the win over Purdue that twos hurt you, but threes kill you. Zach Edey scored 25 points for Purdue in the February matchup, but the Spartans still managed to win. We should fully expect Izzo’s Spartans to remain hellbent on denying the Boilermakers the 3-point shot.
2. Marcus. Bingham. Jr.
In full transparency, Bingham was my preseason pick for Michigan State’s MVP. And I still believe that the team will go as far as Bingham takes it.

This proved correct in the win over the Badgers in the tournament, as Bingham finished with a 19-point, 12-rebound double-double, along with three blocks. He also scored 11-straight points for the Spartans during a stretch in the second half in which they built a small lead that they would not give back in the final few minutes.

But the beautiful thing about Bingham is his versatility and impact on both ends of the floor. At just over two blocks per game, he’s a defensive tone-setter with a respectable post hook. Izzo has been adamant about how effective Bingham can be on the offensive end when he stays in the paint.

Given Purdue’s star-studded frontcourt of Edey (14.7 points, 7.6 rebounds), Trevion Williams (11.6 points, 7.3 rebounds) and Mason Gillis (6.6 points, 4.6 rebounds), setting the tone down low will be a must on both ends for MSU. Bingham holds the keys in both facets.
3. Continue to distribute on offense
Michigan State not having a superstar player has been a motif of this season. You never know who’s going to will the Spartans to the finish line, something that is unfamiliar territory for MSU in recent seasons, given the heroics of Cassius Winston, Xavier Tillman, and even Aaron Henry in the bubble season that was 2020-21.

But, in true Izzo fashion, the Big Ten’s all-time winningest coach perhaps may not want it any other way.

The Spartans may not have an Ivey, Williams or Edey to throw the ball to for an easy bucket. But their wins this season have featured big games and big shots from Walker, Bingham, Max Christie, Gabe Brown and Malik Hall to name a few. The Spartans are battle-tested with a number of guys who are chomping at the bit to be the hero on any given night.

In the win over Purdue, the Spartans’ leading scorers were as follows: Brown (13 points), Marble II (12), Christie and Hoggard (11 each), Walker and Hauser (8 each).

You might notice that Bingham wasn’t even on that list, as he came off the bench in that game for a defensive performance (two blocks, one steal). The bottom line is, the Spartans surely have an argument that they have more ways to beat a good team, thanks to their depth.

With the No. 9 Indiana Hoosiers and No. 5 Iowa Hawkeyes facing off in the other semifinal matchup, time will tell if the Boilermakers can take advantage of a “weak” remaining pool of teams. If not, the once-lowly Spartans may just jump one step closer to snatching a trophy.