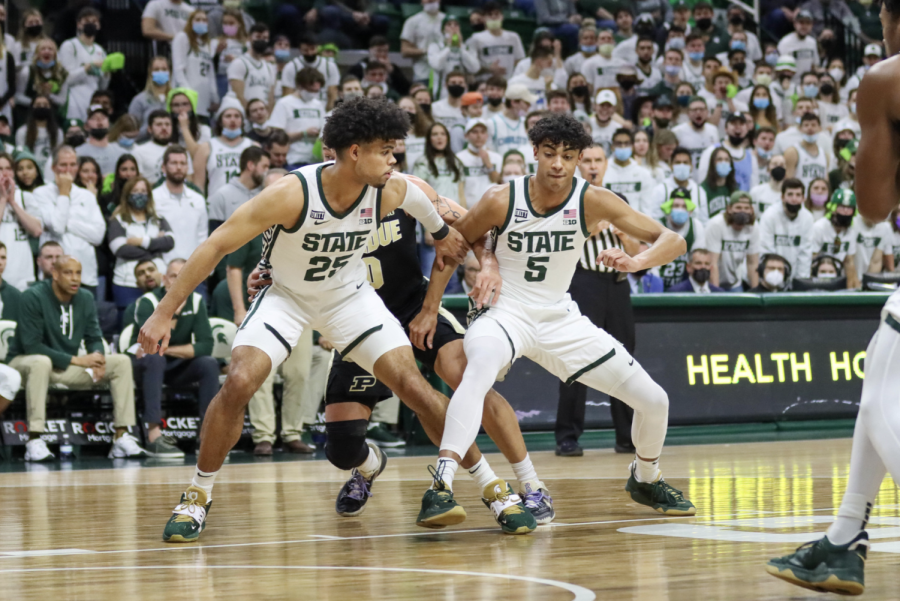 Michigan State men's basketball's Malik Hall and Max Christie box out an opponent in the Spartans' win over Purdue at the Breslin Center on Feb. 26, 2022/Photo Credit: Sarah Smith/WDBM

INDIANAPOLIS – Chaos continues to unfold at Gainbridge Fieldhouse as the Big Ten Tournament rolls on. The Spartans passed the Maryland test by the skin of their teeth Thursday, and in doing so earned a dance with the No. 2 seed in the tournament, the Wisconsin Badgers. The squads split the two regular season matchups, with the away team taking each game.

The Badgers needed the double-bye perhaps a bit more than any other team in the conference, as Big Ten Player of the Year Johnny Davis enters the postseason a little banged up with a minor ankle sprain. As of Friday, Wisconsin coach Greg Gard indicates that Davis will be fully ready to roll for the 6:30 p.m. tip.

The question is: what Michigan State team will we see in this one? The team has built big leads all season long, just to watch them crumble in the second half? Or the team that trades blows with a top-four team in the nation and wins it in the final seconds?

And conversely, will Wisconsin be focused and comfortable in its first game of the tournament? Here are a few keys to victory if the Spartans are to secure a win and a spot in the Big Ten Tournament semifinals.
1. Set the tone on BOTH ends
It’s difficult to say which has been the Spartans’ more corrupting Achilles’ heel: getting complacent with big leads, or starting the game lifelessly. I would argue it’s the latter.

In the teams’ first matchup at the Kohl Center, the Spartans went on a nice run to build a 16-point halftime lead. But it didn’t come before allowing the Badgers to jump out to an 11-0 lead to start the game. For the Spartans, it’s all about coming out strong, focused, and ready to play. The easiest way to do that is try to get your shooters going early, and protect the paint defensively.

After the shooting nights that Max Christie and Gabe Brown had vs. Maryland on Thursday – a combined 5-for-7 mark from 3-point range – that’s who coach Tom Izzo and the Spartans should look for.

On the other end, setting the tone defensively starts down low. Marcus Bingham Jr. is averaging 2.1 blocks per game, good for a top-three spot in the Big Ten. His presence cannot be underestimated. If he is able to be the anchor in the paint that Michigan State needs, the Spartans should be able to hold their own on the perimeter as the No. 1 defense against 3-pointers in the Big Ten.
2. Diversify the defensive game plan vs. Davis
If I’m Michigan State, this might even be the top priority. Wisconsin is a very solid team, as most projections have the Badgers as a No. 2 seed in the NCAA Tournament starting next week. But just like most college teams, they can have a tendency to lean too heavily on Davis offensively.

Versus the Spartans, Davis put up 25 points in each of the two matchups while shooting a combined 16-for-31 from the floor (51.6 percent). In those games, Christie was the primary defender, and rightfully so. But this go-round, I would throw the proverbial “kitchen sink” at Davis. The Spartans simply have the bodies to do it.

Christie, Jaden Akins, Tyson Walker and A.J. Hoggard should all get a chance to guard the First Team All-Big Ten guard. Even Malik Hall is more than capable of getting stops, and Brown’s length could give him an edge, too. The point is, do NOT let Davis get comfortable with any one defender. Keeping Davis at bay and forcing the likes of Brad Davison and Chucky Hepburn to lead the Badgers is a better bet for MSU.
3. Defend, rebound, run
Yes, I’m going to use Izzo’s mantra as the third key to victory.

The Spartans have more athleticism and speed than the Badgers, and they should use every bit of it to their advantage. Brown, Akins, Walker, Hoggard… these guys can get up and down the floor in a hurry. A faster-paced game favors Michigan State.

With nine players averaging at least 10 minutes per game, the Spartans are also the deeper team. Part of the reason is they don’t have a star player like Davis (34.3 minutes per game), but depth can be a tremendous advantage in tournament play. Again, it’s just a matter of how fresh are the Badgers, and how focused are the Spartans?

Ultimately, the hungry dog runs faster, and the Spartans should be hungrier on Friday. The once top-10-ranked team is out to prove that it is worthy of a No. 7 seed in the big dance, or maybe even a No. 6 if the bid-stealing around the country continues. The Badgers, on the other hand, have at least a No. 3 seed locked up. If the focus is there, the Spartans are more than capable of winning the rubber match and advancing.