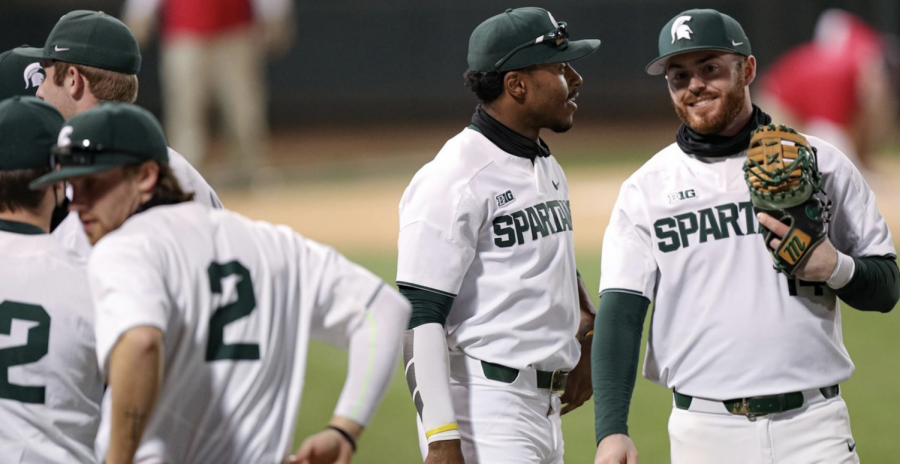 Michigan State traveled to Minnesota over the weekend for a three-game round-robin series in the Cambria College Classic invitational.

The first game was fought between the Spartans and the Kansas Jayhawks.

The action started in the second inning as Spartan junior outfielder Zaid Walker hit one over the back fence of U.S. Bank Stadium for his second home run of the season. Walker’s home run sent him and sophomore infielder Brock Vradenburg home for an early 2-0 lead.

The bottom of the fifth saw even more action from MSU as Frank, redshirt freshman center fielder Bryan Broecker, sophomore infielder Dillon Kark, redshirt junior Peter Ahn and Jebb all scored an RBI, extending the lead to 11-0 by the end of the inning.

After pitching his sixth scoreless inning of the game, sophomore pitcher Nick Powers stepped off the mound and was relieved by redshirt junior Wyatt Rush.

The score remained 11-0 until the top of the ninth, as Kansas redshirt junior outfielder Reyce Curnane tripled, sending sophomore center fielder Tony Castonguay and freshman Tyler Gerety home, bringing the final score of the game to 11-2.

The second game proved to be a challenge for the Spartans as they took on No. 12th-ranked Notre Dame.

Neither team was able to put any points on the board until the bottom of the fifth. Sophomore outfielder TJ Williams hit a double for the Fighting Irish but ended up getting to third base on an error in the infield. Then, as senior outfielder Brooks Coetzee III hit a flyout to right field, Williams crossed home plate, putting the Irish up 1-0.

In the top of the seventh, the Spartans managed to find offensive momentum of their own. An RBI single by Broecker brought Walker home, tying the score at 1-1. However, as Notre Dame took the plate at the bottom of the inning, junior Jack Brannigan hit a home run to left field, putting the Fighting Irish in the lead, 2-1.

After a few more quick innings with neither team being able to put a runner on base, Notre Dame took the 2-1 win.

Coming off the close loss, the Spartans looked to close out the weekend with a win against No. 25 West Virginia.

The Mountaineers scored an early lead in the fourth inning as freshman Alex Khan hit a single to right field, sending freshman Grant Hussey home. The Spartans, however, quickly answered in the bottom of the inning, scoring three runs off RBIs from Mayes, Vradenburg and Walker.

The Spartans continued to dominate WVU, holding it to an RBI from sophomore Nathan Blasick and an inside-the-park home run by sophomore catcher McGwire Holbrook. MSU found no trouble keeping up, however, as Jebb hit three RBIs and Farquhar hit one RBI. Frank also scored off an error at second base after he stole third, leaving the Spartans with a 9-3 victory over the Mountaineers.

The Spartans are set to kick off a four-game series at the First Pitch Invitational down in Greenville, South Carolina this week. Their first game will be Wednesday at 6 p.m.