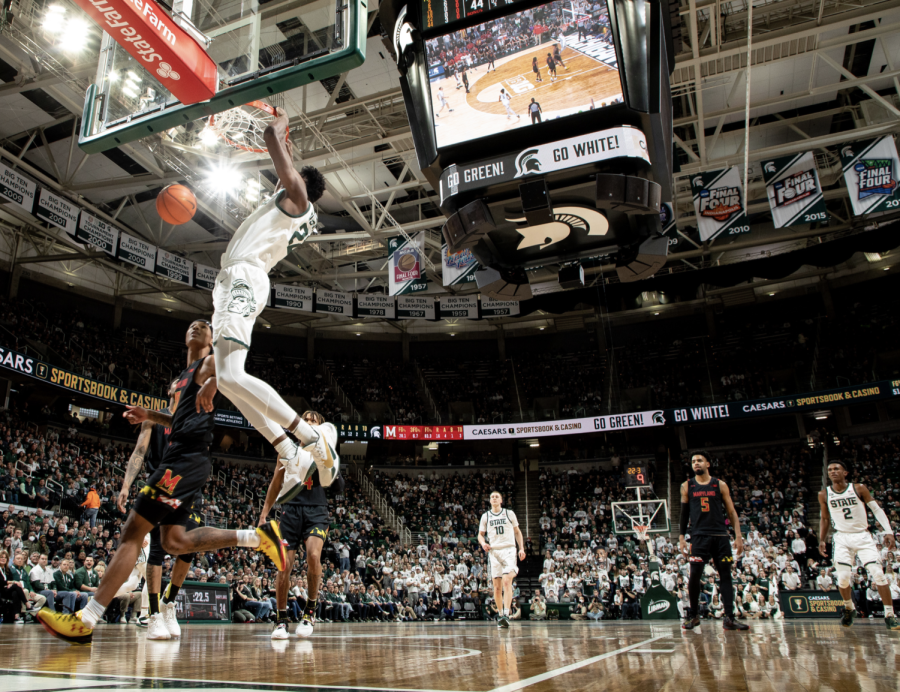 MSU forward Mady Sissoko throws down a dunk during the Spartans' over Maryland on March 6, 2022/ Photo Credit: MSU Athletic Communications

EAST LANSING – The Michigan State Spartans took the court at home one final time this season, with the ever-standing mission of allowing their seniors to kiss the Spartan head logo and go out with a win. Ultimately, it was mission accomplished despite a shaky second half, and the Spartans sent their seniors out right with a 77-67 victory.

The win also gave Michigan State coach Tom Izzo win No. 663 at MSU, moving him past Indiana’s Bob Knight as the all-time winningest coach in Big Ten history. It’s also the 21st time that Izzo has notched at least 20 wins in a season during his 27-year span at MSU.

The opening sequence of the game was all about the seniors in green and white. After winning his last opening tip in the Breslin Center, Marcus Bingham Jr. cut straight to the basket for an alley-oop slam from Joey Hauser.

Moments later, Gabe Brown swiped the ball from Fatts Russell and converted an and-one layup in transition to give the Spartans a quick 5-0 lead. Then, after a defensive stop, Bingham knocked down a three from the right wing off a Brown assist. Another stop later, Bingham nailed yet ANOTHER long ball from the top of the arc to make it 11-0 Spartans, prompting Maryland interim coach Danny Manning to call timeout.

The Spartans really couldn’t have drawn up a better start to their final game of the regular season.

Maryland finally got on the board with 14:56 to play in the half, with a Hakim Hart free throw. The Spartans were able to drive the score all the way up to 18-1 before the Terrapins scored their first field goal, a Hart fastbreak layup at the 11:01 mark. The Terrapins started the game 0-for-14 from the field before taking the lid off the basket.

Once the Terrapins did make a shot, however, they were able to string together some nice offensive sets, pulling the score to 23-11. But the Spartans kept their foot on the gas, and with just over three minutes to play in the half, Bingham banked home his third 3-pointer of the day in three attempts to make it a 21-point MSU lead. The senior from Grand Rapids finished the half with 12 points, nine rebounds and a block en route to a 46-26 Spartan lead at the break.

The story in the first half was a red-hot MSU offense, shooting 17-for-32 (53.1 percent) from the floor, and an arguably hotter defense that held the Terrapins to an eye-popping 9-for-32 (28.1 percent). The Spartans’ first-half scoring effort was pleasantly balanced, with eight Spartans finding the scoring column. Aside from Bingham, Julius Marble II had eight points, while Tyson Walker and Max Christie had six each.

Eric Ayala started the second half with back-to-back threes to try to fire up the Terrapins’ scoring efforts. This kickstarted a 10-0 Maryland run to start the half, forcing Izzo to call timeout with his team’s lead cut to just 10 at the 17:36 mark.

Hauser broke the ice, connecting a three from the top of the arc for his first scratch of the day. Walker then hit a three from almost the exact same spot off a Hauser assist to bring the MSU lead back up to 16. A nice finish from Malik Hall and a pair of free throws from Jaden Akins made it 56-36 MSU, as it reclaimed its 20-point advantage.

Then, things started to go south QUICKLY for the home team.

Ayala shot the ball exceptionally well in the second half, helping the Terrapins cut the Spartan lead all the way down to five points, 61-56 with seven-and-a-half minutes to play. Izzo was forced to call another timeout, with the Terrapins shooting 57.1 percent in the half and Ayala already with 17 second-half points.

Out of the timeout, Christie turned the ball over (his fourth of the game) and gave Russell a fast break opportunity. He was fouled by Brown, but went 2-for-2 from the stripe as the Spartans suddenly found themselves clinging to a three-point lead.

Brown then got a friendly bounce on a floater at the end of the shot clock, and on the other end, Russell airballed a fadeaway three.

With the crowd back on its feet, Brown nailed a 3-pointer with 5:40 to play to propel the Spartans back to an eight-point lead. Akins then poked the ball away from Russell, and was grabbed before he could hit the break. This was ruled a clear-path foul, and Brown hit the technical free throws to put the Spartans back up by double digits with 5:20 to play, where they’d stay until the end.

The dagger perhaps came from Hall, who converted a spin-move, and-one layup with 1:59 to play to put his Spartans ahead by 13. The Spartans rode the lead to a 77-67 victory, finishing the regular season with a 20-11 record (11-9 in the Big Ten).

It obviously wasn’t just the seniors that willed the Spartans to victory. Hall led the team with 17 points, while Walker had 13 and five assists. For the Terrapins, it was Ayala, Russell, and Donta Scott combining for 48 points.

While this game closes out the regular season for both squads, they’ll meet again in the Big Ten Tournament as the No. 7 vs. No. 10 matchup at 6:30 p.m. Thursday. Follow @WDBMSports on Twitter for all of your game coverage.