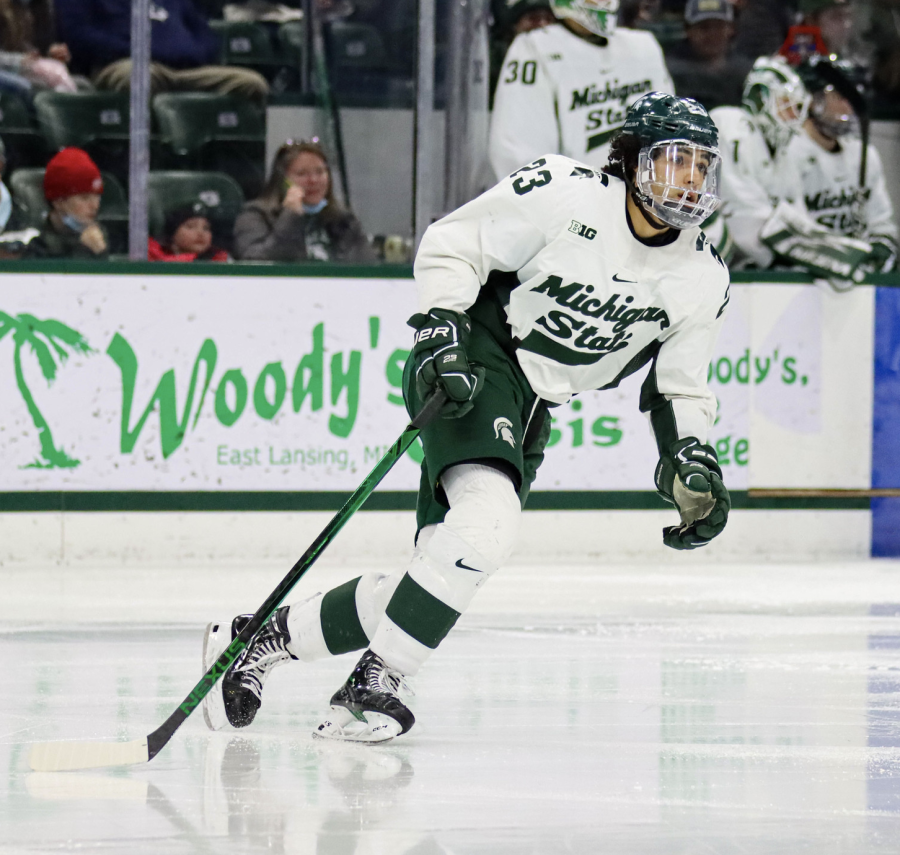 The loss dropped the Spartans to 12-23-1 overall; tonight’s result was also the sixth loss to Michigan this season in six meetings for MSU.

With tonight’s defeat, the Spartans are still winless in the Big Ten tournament under coach Danton Cole (0-9). The 23 losses are also the most that Cole has suffered since being hired in 2017.

After a 4-1 victory Friday, Michigan only needed one more win to end the season of its in-state rival and advance to the conference semifinals.

Sophomore forward Thomas Bordeleau opened the scoring early, putting Michigan on the board 54 seconds into the first period. From there, the route was on as the Wolverines would get eight total goals from seven different players. Michigan goalie Erik Portillo even got involved with the scoring, racking up assists on both the Bordeleau goal and on a goal by senior defenseman Nick Blankenburg in the late stages of the second period.

MSU goalie Drew DeRidder was pulled in favor of sophomore Pierce Charleson just over seven minutes in after the senior allowed three goals on four shots; he would make 32 of 37 saves in relief. Portillo would stop all 23 MSU shots he saw. With the commanding lead, senior Jack Leavy guarded the Michigan cage for the final 5:33, stopping the only shot he saw.

Michigan, the tournament’s No. 2 seed, will play either Notre Dame, Penn State, or Ohio State in the second round.

What happened to Michigan State?

At least they can get a head start on their spring break?

There aren’t many positives to take away from this game for the Spartans. They were thoroughly dominated for the full 60 minutes. They were outshot, outskated, and outhit by a Michigan team that got whatever it wanted. Simply put, Michigan played like it wanted the win more, and that’s why the Wolverines are moving on.

For MSU, it will be a long season of self-reflection as the Spartans say goodbye to fifth-year forward Mitchell Lewandowski, the teams fourth-highest point getter despite missing 15 games. Senior goaltender Drew DeRidder, alongside defensemen Dennis Cesana, Mitchell Mattson, Christian and Cole Krygier are set to graduate. They are joined by forward Adam Goodsir, but all of them sans Lewandowski have the COVID-19 year of eligibility if they choose to use it.

Looking ahead to the rest of the Big Ten tournament

With the win, Michigan will advance to the single-elimination semifinals. Who they play will be determined Sunday. After the opening round, the four remaining squads will be reseeded, and the lowest-seeded team remaining will play Minnesota. The next lowest will play Michigan.

Both the Notre Dame-Wisconsin and Penn State-Ohio State series will need a third game to determine the winner. The only one of those teams that is guaranteed to not play Michigan is Wisconsin, as the sixth-seeded Badgers are now the lowest seed left.