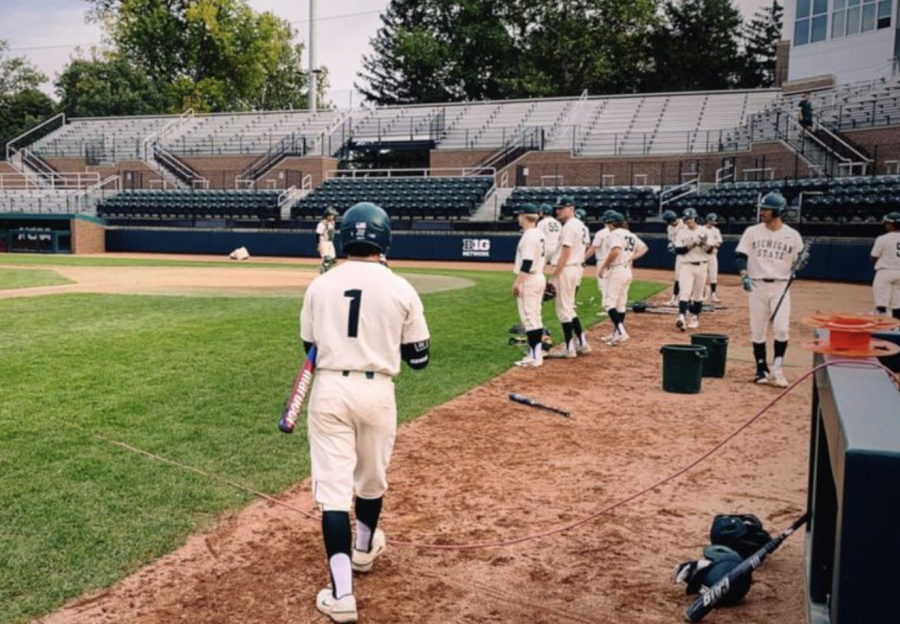 Despite inclement weather to start the weekend, Michigan State baseball returned to the field on Sunday and Monday to take on Abilene Christian. The Spartans were swept by the Wildcats, falling to 3-4 on the year.

Michigan State was originally scheduled to play four games this weekend, but the weather forced it to play a three-game series with a doubleheader Sunday and the series finale Monday afternoon.

The Spartans’ weekend started out rocky, losing 10-1 in the first game on Sunday. The Wildcats took a 2-0 lead in the first inning when right fielder Colton Eager hit a two-run home run off of Zach Iverson. Jack Frank had an RBI double in the fourth inning to make it a 2-1 game, but the Wildcats would run away with it from there.

Iverson worked his way into the fifth inning before getting pulled when he allowed the first two batters to get on. Andre Carson came in for relief and faced just four batters, walking three of them and allowing two runs to score, making it a 4-1 game.

Michigan State couldn’t get any offense going late in the game after Abilene Christian starting pitcher Tyler Morgan was pulled. In the final five innings, the Spartans amassed just one hit and struck out nine times against the Abilene bullpen. The Wildcats put the game away with a five-run eighth inning when Eager hit a three-run home run and Miller Ladusau drove in two on a double to make it 10-1.

In the second game Sunday, the Spartans took an early 1-0 lead in the top of the first when Frank had another RBI double. The Wildcats didn’t take long to respond, however, scoring 12 unanswered runs, including six in the bottom of the first. Michigan State starter Nick Powers would go just one-and-a-third innings, giving up six runs on five hits and three walks, taking his first loss of the season.

Trailing 12-1 in the ninth inning, Michigan State would not go down without a fight. Christian Williams and Parker Pilat were able to get on when a wild pitch allowed Williams to score. Sophomore Trent Farquhar then hit a two-run home run to reach the final score of the contest, 12-4.

The Spartans had a Sunday to forget losing both ends of the doubleheader and getting outscored 22-5 between the two games. Michigan State did have an opportunity to avoid the sweep Monday afternoon but failed to do so.

Freshman Ryan Szczepaniak was given the start on Monday and had another strong performance. He did give up a home run to Ladusau in the second inning but would only give up two hits and strike out three in his two-and-one-third innings of work. Conner Tomasic would take over for Szczepaniak and would go another three-and-two-third innings, giving up one hit and allowing no Wildcats to score.

Trailing 1-0 in the fifth inning, the Spartans were able to load the bases when Farquhar singled to score Bryan Broecker from third and tie the game. A wild pitch later in the inning allowed Brock Vradenburg to score and give Michigan State a 2-1 lead.

The Spartans took their lead into the seventh inning before a catastrophic meltdown on defense would allow the lead to slip away. The Wildcats would pile on nine runs in the seventh with just six hits thanks to two errors by Michigan State. Kyle Dunning started the inning before giving up four runs and not retiring any ACU batters. Kyle Bischoff would come in to get MSU out of the inning but not before allowing five hits and five more runs to score making it a 10-2 game. Of the nine runs scored by ACU in the seventh, only two of them were earned runs.

The Spartans couldn’t overcome the large deficit as Abilene Christian’s bullpen shut the door again, completing the 10-2 defeat and sweeping the series.

It was a disappointing weekend for MSU baseball, especially after taking three of four in its opening series against UNLV. The Spartans will have to bounce back quickly with a tough weekend ahead at the Cambria College Classic in Minneapolis. Michigan State will take on Kansas, No. 10 Notre Dame and West Virginia at U.S. Bank Stadium, the home of the Minnesota Vikings. The first game of the weekend for MSU is at noon on Friday against Kansas.