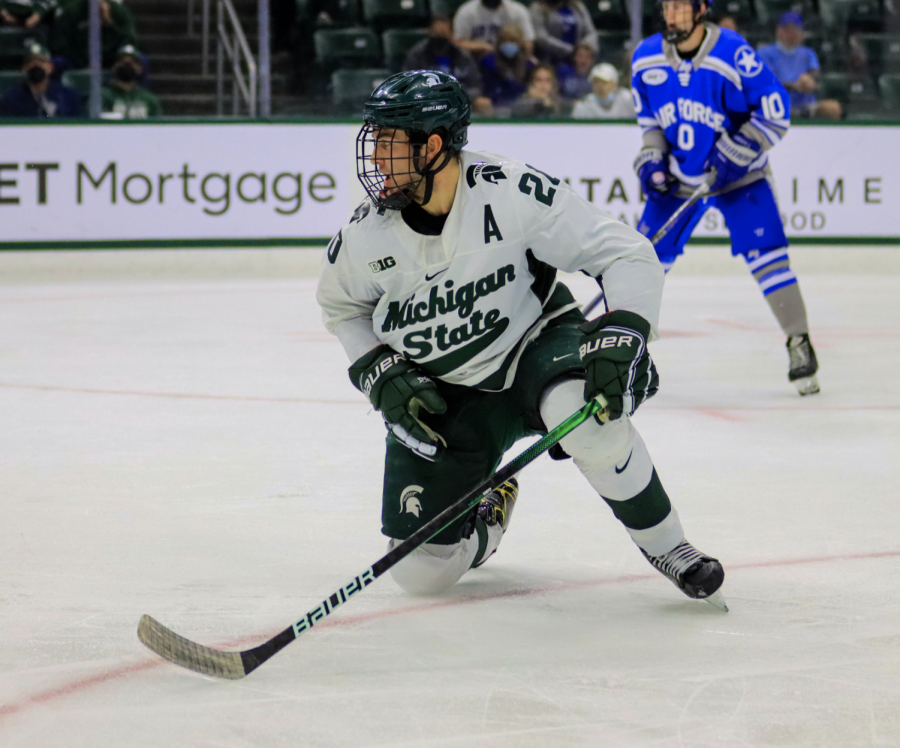 EAST LANSING, Mich. — The Michigan State Spartans defeated the Penn State Nittany Lions on senior night behind a 38-save performance from Drew DeRidder and a game-winning goal from Adam Goodsir with nine seconds left in the first period to give MSU their first win in 2022, snapping their 13-game losing streak.

It was the type of game fans have come to expect over the years as the Spartans bid farewell to their seven seniors. It was a low-scoring, high-intensity game that included a five minute power-play, a handful of big hits, and a goal from an unlikely source.

Rather typical of this senior class.

For the first time since the “Duel in the D” on Feb. 12, the Joshua-Nodler-Kelly line was reunited on the ice as Jeremy Davidson was scratched for the Spartans. It may not be the flashiest line, but it was the Spartans’ best line with the absence of senior forward Mitchell Lewandoski to start 2022.

That line opened the scoring with just under 10 minutes remaining in the first period. Tanner Kelly received a drop pass at the Penn State blue line and fired a cross-ice pass to forward Jagger Joshua. Joshua worked his way to the front of the net, and after his initial shot was saved, Josh Nodler followed up and poked the puck past sophomore goaltender Liam Souliere to give the Spartans the early lead.

Following the “ebb and flow” type of game it was, Penn State would spend the remainder of the first period on the attack.

The Nittany Lions would tie things up with 57 seconds left in the first period off a bad break for MSU. After Cole Krygier was unable to corral a puck at his own blueline, Penn State jumped on a rush chance. Nittany Lion forward Connor McMenamin fired a cross-ice feed for Kevin Wall who nudged it across the line. McMenamin beat Erik Middendorf to the front of the Spartan net and tucked it past a sprawling DeRidder who couldn’t paw it down before it crossed the line.

Michigan State has been the victim of bad breaks and weird bounces all season, but they would get the last laugh on senior night as a friendly bounce gave Aam Goodsir an opportunity to score on his senior night.

Spoiler alert: He did.

The Spartans reclaimed the lead just before the break on Goodsir’s second goal of the season. He chased his own dump-in and fired a sharp angle shot that went between the post and Souliere’s right pad and into the net to give the Spartans a 2-1 lead heading into the first intermission.

Goodsir’s sixth career goal would be the eventual game winner as the Spartan defense would be tested early in the second period and for the remainder of the game.

Penn State came out looking to equalize out of the break and had some good quality chances on DeRidder. McMenamin had a high-quality chance just over a minute into the period, but a timely block by Cole Krygier kept McMenamin from wiring a shot from just inside the faceoff dot into a wide-open net.

Penn State would continue applying consistent pressure in the Spartan zone for the first five minutes of the period, but the MSU defense came up with timely blocks and DeRidder was able to preserve the Spartan lead heading into the media timeout halfway through the period.

The Nittany Lions pressured the Spartans for most of the period but DeRidder and the MSU defense came up big when they needed to while also getting those timely saves that this program has been known to have with DeRidder between the pipes.

After a Penn State icing, MSU spent most of the remaining five minutes in the offensive zone and gave the Nittany Lions fits with their puck possession and passing prowess. Senior defenseman Dennis Cesana almost got on the scoresheet after a nifty give-and-go along the point but his shot was saved by Souliere, who was under fire from that point on.

Nash Neinhuis had the last chance of the period when he was left wide open at the near point. His slap shot hit a body in front and bounced in the crease but was too far from any Spartan forward to tap it home as a scoreless second period saw the Spartans still up 2-1 with 20 minutes to go.

Penn State would push the envelope early in the third as they searched for the tying goal. Ryan Kirwan had a chance to tie it when he was left unmarked on the post, but he pushed his shot wide of a yawning net. Moments later, MacEachern was robbed by the stick of DeRidder as he had a breakaway opportunity.

The Nittany Lions had an opportunity to tie the game when Chrisitan Krygier was ejected from the game for an illegal check from behind on PSU’s Danny Dzhaniyev. PSU would have a five-minute “score at will” power-play but once again the Spartan defense came up huge including a goal-line clearance from Cole Krygier halfway through the power-play.

That penalty kill would prove to be the break the Spartans needed. Despite a fair amount of Penn State scoring chances, DeRidder preserved the 2-1 win (the first time MSU has won a game in 2022).

With the win, the Spartans end the regular season with a 12-21-1 overall record and a Big Ten record of 6-18-0-1. MSU will open Big Ten tournament on the road against Michigan on Friday, March 4.