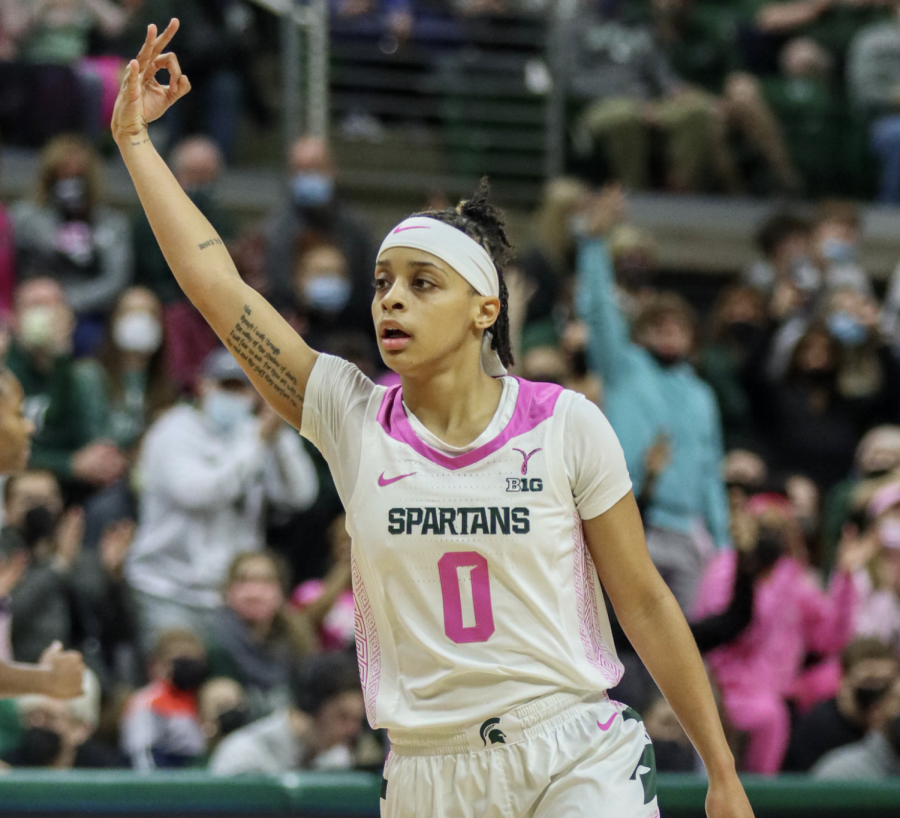 MSU guard Deedee Hagemann celebrates after canning a 3-pointer during the Spartans' 63-57 over No. 4 Michigan on Feb. 10, 2022/ Photo Credit: Sarah Smith/WDBM

ANN ARBOR, MI – Following a brutal loss at home to the Penn State Nittany Lions on Monday, the Michigan State Spartans faced a quick turnaround on Thursday, on the road, against the No. 6 Michigan Wolverines. The Spartans were looking to get back in the NCAA Tournament bubble with their second win over the Wolverines this season, but an inconsistent offensive performance led to a 62-51 defeat.

Freshman guard DeeDee Hagemann got the Spartans going early with a quick 3-for-3 start from the floor and eight points. Hagemann’s contributions were part of a 12-4 MSU run to open the game, in which the Spartans shot 5-for-8 as a team.

“It’s great to be a facilitator, but on this team, with the injuries, it’s important for (Hagemann) to score the ball a little bit,” Spartan head coach Suzy Merchant said. “I really thought she gave us that energy…and it was good to see.”

However, the Spartans, in typical fashion, would get into early foul trouble, racking up eight fouls in the first quarter. Along with the fouls, the Spartans turned the ball over five times in the opening frame and allowed the Wolverines to battle back late in the quarter behind senior forward Naz Hillmon, who had nine of the Wolverines’ 10 points in the quarter. Despite the late charge, MSU held on to a 14-10 lead at the end of the first.

The second quarter opened as a fast-paced affair with both teams getting whatever they wanted on the offensive end. Hillmon continued her hot start for the Wolverines, adding eight more points to her first-half total of 17. MSU senior guard Nia Clouden kept the Spartans afloat with seven points of her own in the quarter to maintain the Spartans slim lead.

Michigan junior guard Maddie Nolan knocked down back-to-back three-pointers late in the half to give the Wolverines their first lead of the contest at 28-26, but the Spartans retaliated with some stellar shooting of their own to go into halftime tied 32-32.

In the third quarter, Hillmon continued to have her way. With very little resistance on the interior, she went to work and scored six points in the first three and a half minutes of the period to give the Wolverines a five-point advantage.

Post play was an issue for Michigan State. Forwards Alisia Smith and Taiyier Parks had no answer for Hillmon on either end, and found themselves in foul trouble throughout the game. The two combined for only nine points on the night and left MSU heavily-reliant on its guard play to remain within striking distance.

The Wolverines turned up the heat on defense in the second half, suffocating the Spartans on the perimeter and not allowing many driving opportunities. Clouden was consistently trying to work through double, even triple teams on the perimeter and seemed unable to get into any sort of rhythm. MSU was called for two 24-second violations in the span of two minutes across the third and fourth quarters. Michigan’s stifling defense resulted in zero shot attempts for MSU on both possessions.

Merchant said she has been looking for short stints to get Clouden some rest during games.

“I feel bad sometimes, sometimes I want to get (Clouden) out,” Merchant said. “Tonight we just needed a few others around (Clouden) and all those injuries to those kids who were upperclassmen, we just don’t have as much flexibility to get her off the court.”

Despite the offensive struggles, MSU entered the fourth quarter in a position to steal a victory, only trailing 48-44 on the home floor of the No. 6 team in the country.

Yet, Michigan opened the frame on a 6-0 run, pushing its lead to 10 and forcing a quick MSU timeout with 7:43 left in regulation.

Needing answers, Michigan State tried turning to Matilda Ekh, but the freshman forward from Sweden delivered one of her worst performances of the season, scoring only two points on 1-for-11 shooting. The Spartans did not score a point in the first four minutes of the final quarter, and the Wolverines turned this drought into a 10-2 run and 12-point lead with just over six minutes remaining.

For Michigan, the story was Hillmon. The All-American candidate and reigning Big Ten Player of the Year turned in an impressive performance in her last game in the Crisler Center, scoring 28 points on 11-for-20 shooting and snagging eight rebounds. Nolan and fellow senior forward Emily Kiser scored eight points apiece.

Clouden led the Spartans with 22 and Hagemann poured in 13, all in the first half. Michigan outscored the Spartans 30-19 in the second half as MSU’s offensive struggles continued, only scoring seven points in the fourth quarter.

“To hold (Michigan) to 62 points is good enough to win if you can make your shots and that’s just not where it came from tonight” Merchant said.

The Spartans fell to 14-13 (8-8) on the year and the Wolverines improved to 22-4 (13-3). Michigan State will conclude its regular season slate on Feb. 27, back home in the Breslin Center, with a matchup against the No. 17 Ohio State Buckeyes.