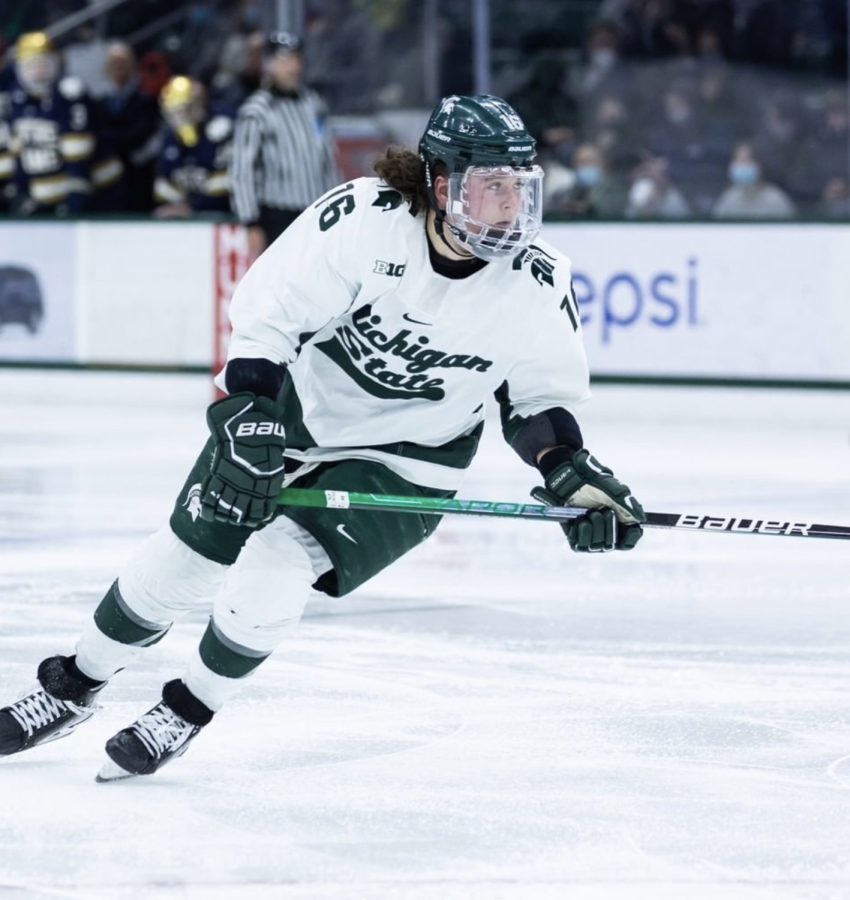 East Lansing– After a close 2-1 loss Friday night, Michigan State hockey returned to the ice Saturday night looking to put an end to its 11-game losing streak against Notre Dame. The Spartans were defeated 4-2, getting swept in the weekend series and extending the losing streak to 12 games.

Michigan State came into the game down a player after senior defenseman Cole Krygier was disqualified from the contest for his fight with Graham Slaggert in Friday’s game. The tension between the conference rivals carried over into Saturday’s game in the form of big hits and the exchange of words between whistles.

Notre Dame took control of the game early, putting lots of pressure on the Spartan defense and goaltender Drew DeRidder. After missing the net on a rush, Notre Dame winger Jack Adams regrouped for a 2-on-1 with teammate Justin Janicke. Adams slid a pass on the stick of Spartan Aiden Gallacher to Janicke who was able to put it past DeRidder’s outstretched leg to give the Fighting Irish a 1-0 lead six minutes into the game.

Later in the period, Michigan State would get an opportunity to answer with a power play, but the Spartans were unable to create any scoring chances. Michigan State’s power play struggled all night, as the team scored just once in its five power plays.

Notre Dame would extend its lead to two late in the first. This time, Janicke found Adams for the goal. Notre Dame came in on a 3-on-2, and a pass from Hunter Strand bounced off of Janicke towards Adams, who slid it past an out-of-position DeRidder. The Fighting Irish would take this 2-0 lead into the first intermission.

Michigan State had an opportunity early in the second after Spencer Stastney took a tripping penalty for Notre Dame. The Spartans thought they had gotten on the board during a scrum in front of the net, but Notre Dame defensemen Adam Karashik laid across the goal line to keep the puck out. That, combined with Jesse Tucker taking an unsportsmanlike penalty after the whistle to end Michigan State’s power play, took away all momentum for the Spartans.

Notre Dame took advantage of the extra space during the 4-on-4 and made it a 3-0 game. Jesse Lansdell found Chase Blackmun on the wall, who walked in towards the net and fired a shot from the dot, beating DeRidder under the blocker.

The Spartans would finally find the scoreboard 12 minutes into the second period. Tucker and Erik Middendorf won a battle for the puck in the corner, and Tucker found Jeremy Davidson open in the slot to put it past Matthew Galajda for his team-high 11th goal of the year.

Notre Dame was quick to answer the Spartans’ goal just over a minute later when Stastney fired a shot from the point that deflected off Spartan defensemen Nash Nienhuis, getting past DeRidder to make it a 4-1 game.

The Fighting Irish continued the pressure on Michigan State and almost found the net again with five minutes left in the period but ultimately couldn’t capitalize. During one of the scrums in front of the net, senior defenseman Christian Krygier went down with an injury and did not return.

In the third period, neither side created many opportunities to score. Notre Dame played to control the time of possession and not let the Spartans back into the game. DeRidder stopped multiple Notre Dame breakaways to keep Michigan State in it, but the Spartans couldn’t make up the deficit.

As the game came to a close, the Spartans capitalized on a power play when captain Dennis Cesana found Middendorf on the wall, who one-timed a shot past Galajda with seven seconds to play, reaching the final score of 4-2.