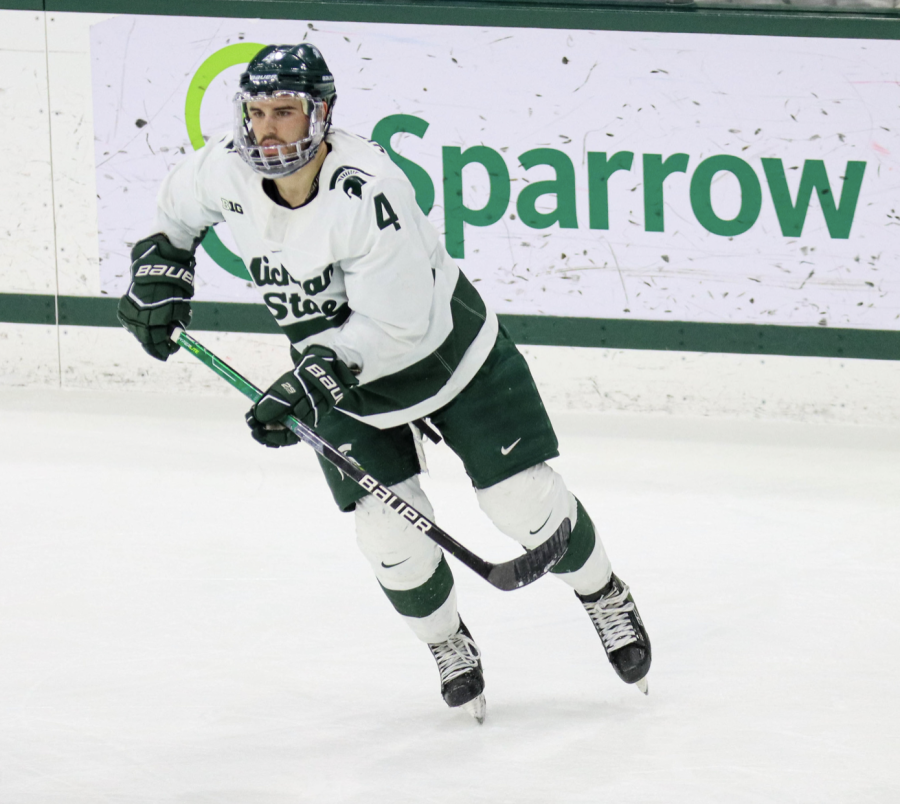 DETROIT – If you pay attention to the NHL, you might know that four of the top five picks in the 2021 NHL Draft all play at the University of Michigan.

Three of those four players – along with Brendan Brisson – are currently playing in the Olympics in Beijing. Defenseman Luke Hughes was the only top-five pick available.

Turns out Hughes was all that Michigan needed. The New Jersey Devils prospect finished with a goal and two helpers in a 7-3 win against Michigan State Saturday night in the sixth annual Duel in the D at Little Caesars Arena.

The Wolverines wasted no time getting onto the scoresheet, when 1:35 in, freshman winger Mackie Samoskevich took advantage of a Cole Krygier turnover and backhanded a puck over Drew DeRidder’s right shoulder to cap off the breakaway and open the scoring.

Less than six minutes later, the puck would trickle off the stick of Michigan’s Dylan Duke, off the side of Spartan captain Dennis Cesana, and into the net. The Wolverines would hold a 2-0 lead after the first period.

The second period is where things got interesting. After forwards Jimmy Lambert and Thomas Bordeleau both scored to make it 4-0, Cesana and defensive partner Nash Neinhuis both scored within a minute of one another to bring the Spartans within striking distance.

The rivals would go back and forth for the rest of the period. Lambert and Neinhuis would both score their second of the game; Wolverine forward Nick Granowicz would net one more before the end of the period to make the score 6-3.

The Spartans tried trimming their three-goal deficit in the third, but to no avail. The Wolverines outshot MSU 14-1 in the frame and thoroughly exerted their will on the MSU defense.

While DeRidder was strong the entire period, Hughes would score with 15.6 seconds left to make the final score 7-3.

What does this pair of wins tell us about Michigan?

Resounding wins over the past two nights confirm that Michigan is an incredibly deep team, even without Owen Power and company. They can get offense from anywhere in the lineup, and this weekend proved that. Without most of its top talent, scoring 13 goals in one weekend proves that Mel Pearson has consistent depth scoring throughout his lineup, which is an essential characteristic for a team with Frozen Four aspirations.

This game was also entertaining to watch for Devils fans watching their top prospect dominate the way he did. On top of the steady scoring, Brent Hughes played a critical role in quarterbacking the Michigan offense, consistently making great plays to advance the puck up the ice and into the Spartan zone.

What went wrong for Michigan State?

There were a handful of reasons why Cole’s squad lost, but the most obvious reason was the defense. The unit was aggressive to a fault. For every goal they scored, they allowed two the other way.

The stats may not say so, but DeRidder was consistently very strong in goal. He made a number of highlight-reel saves, and every goal that Michigan scored came as a result of an odd-man rush or breakaway.

On multiple occasions, when a defenseman jumped into the play to attack the puck, Michigan’s speed would consistently burn them, leading to a prime scoring opportunity. A team as talented as Michigan will force its opponents to pay for mistakes like that.

Can Michigan State turn it around any time soon?

There are still four games left in the regular season. So, technically, yes. However, no wins come easy in the Big Ten. It’s one of the deepest conferences in college hockey, and no school is going to give up an easy win.

A pair of home series may be the solution they need, however. The Notre Dame Fighting Irish will come to Munn next weekend before Penn State comes to town on Feb. 25-26.