No. 17 Spartans bounce back with convincing 76-61 win over Hoosiers 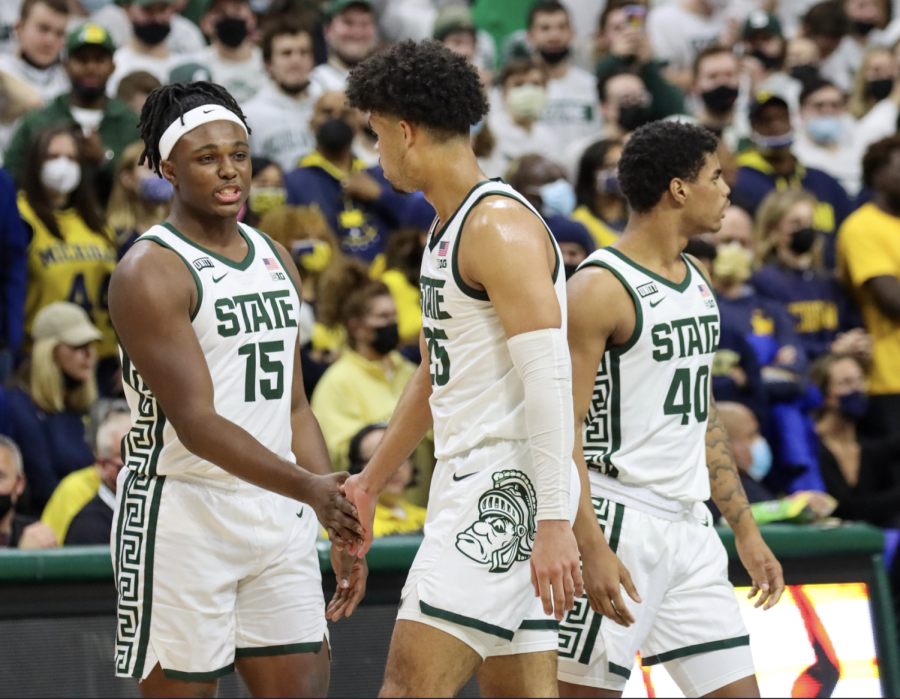 EAST LANSING, Mich– The No. 17 Michigan State Spartans returned to the court Saturday looking to bounce back after two consecutive losses to Rutgers and Wisconsin. It was a chippy game throughout but the Spartans were able to defeat the Indiana Hoosiers 76-61 to snap a two-game losing streak. With the win, the Spartans improved to 18-6 on the season and 9-4 in Big Ten play.

MSU coach Tom Izzo was much happier with the team’s energy level compared to its recent performances.

Izzo decided to shake up the starting lineup for the game, giving sophomore A.J. Hoggard the start at point guard over junior Tyson Walker. The decision seemed to pay off as Hoggard finished the game with 14 points and eight assists before being ejected after receiving two technical fouls.

Walker was also very impressive Saturday, as he put up a season-high 15 points in 18 minutes played. Izzo made the change to avoid slow starts and was pleased with the performances of both of his point guards.

“We made the change because of two reasons,” Izzo said. “Slow starts… so we felt (Walker) could get more people involved.”

MSU came out of the eight-minute timeout with a 7-0 run to take a 25-15 lead but the Hoosiers climbed back with a 9-0 run to make it 25-24 with 3:36 remaining in the half. The Spartans would dominate the final 90 seconds of the half with an 8-1 run, including five points from Hall, leading the Hoosiers 37-30 at the half.

MSU came out of the break sluggish and IU took advantage, going on a 8-0 run thanks to Xavier Johnson and Race Thompson, who both had four points in the run. Malik Hall stopped the run with a 3-pointer from the wing.

The Breslin Center crowd went crazy after a Walker steal led to a 2-on-1 fast break for Hall and Gabe Brown that resulted in a Hall alley-oop dunk from Brown. Indiana coach Mike Woodson lost his cool just after Johnson was charged with a foul. Woodson was charged with a technical and Max Christie hit the ensuing free throws to give MSU a 47-41 lead with 14:31 to play.

Walker would check-in for Michigan State and came alive the second half after scoring just two points in the first. He would score the next seven points for MSU, extending the lead to 54-44 and would finish the second half with 13 points.

Indiana worked its way to reduce the deficit to three points with 9:30 to play, but that’s the closest the Hoosiers would get the rest of the game. A 10-2 Spartan run over four minutes highlighted by a circus 2-pointer from Hall as the shot clock expired gave Michigan State a 64-53 lead with 5:25 to play.

Hoggard was ejected after receiving his second technical foul with 4:00 to play, but the game was in hand at that point. Michigan State would close out the game with two 3-pointers from Walker before bringing in Keon Coleman and company to finish the final moments.

Christie was the unsung hero of the game. The freshman struggled offensively, putting up just eight points on 1-for-5 shooting, but he finished +25 in his 33 minutes played. His presence on defense was felt and helped shut down the Hoosier offense.

For Indiana, Trayce Jackson-Davis led the way offensively with 17 points but he was just 5-for-13 from the field.

Tamar Bates and Race Thompson both finished with 13 points and were the only other Indiana players in double figures.

The Spartans will be back in action Tuesday night, as they travel to Penn State to take on the Nittany Lions.