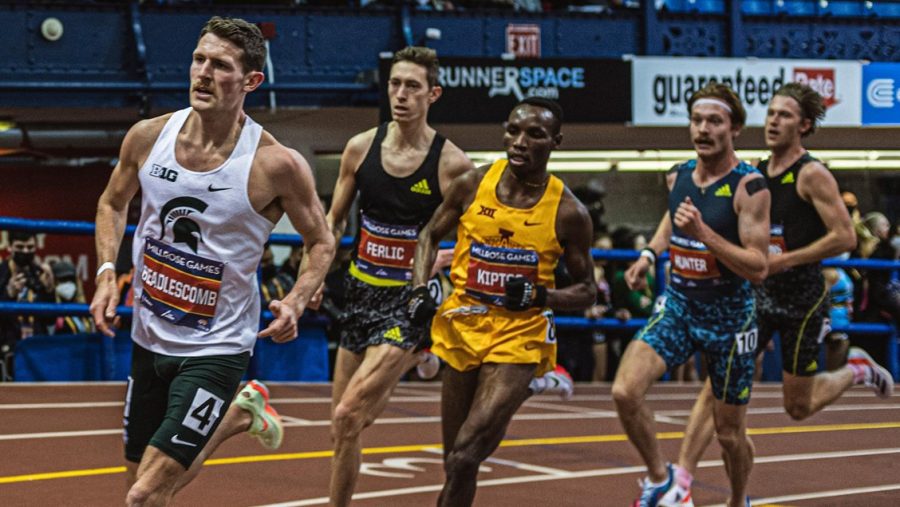 After holding his own against a handful of elite collegiate and professional runners at the 114th Millrose Games in New York City two weeks ago, Michigan State graduate student Morgan Beadlescomb made history Friday night at the Windy City Invite.

Beadlescomb, who finished fifth overall at the NCAA Cross-Country Championships in November, kept up his competitive streak by running a 3:52.03 indoor mile, good for the fourth-fastest time in NCAA history, the fastest time in MSU history and the fastest collegiate time this season.

“It was really fun to compete with the guys,” Beadlescomb said. “I knew with just under 200 meters left I wanted to throw my name in the hat, so I went for it, and [now I’m] the top collegiate in the nation.”

Beadlescomb ran against two former Oregon teammates and current Nike stars in Cooper Teare and Cole Hocker, who finished first and second in the race, respectively. Both runners were going for the U.S. indoor mile record, which was set by Bernard Lagat in 2005 when he ran a 3:49.89.

Hocker actually led for a majority of the race, but it wasn’t until the sixth lap when Teare took a slight lead over his teammate. All the while, Beadlescomb was within a second or less of the two pros, using their record-breaking mindsets and adrenaline to fuel his own performance.

It was the first time that Beadlescomb has broken the elusive four-minute barrier.

“It was hard from the gun. We went out in 30 seconds, which is not where we wanted to be. But we came back into it and we ran really hard,” Beadlescomb said.

Beadlescomb’s record-setting performance highlights a great first few weeks to his indoor season, as he finished seventh overall with a 7:43.22 time in the 3000 meter race at the Millrose Games, which broke the MSU record in that event and gave him the fastest time in the nation this year. He also competed against Teare and Hocker in that race, among other elite professional and collegiate runners.

The Windy City Invite’s second and final day of competition will take place Saturday. A handful of MSU runners plan to participate in this final day of events before the team heads to Ann Arbor next Friday to compete in the Silverston Invite. That meet and the Alex Wilson Invite in South Bend are the only two races left before MSU competes in the Big Ten Indoor Championships on Feb. 25 and 26.