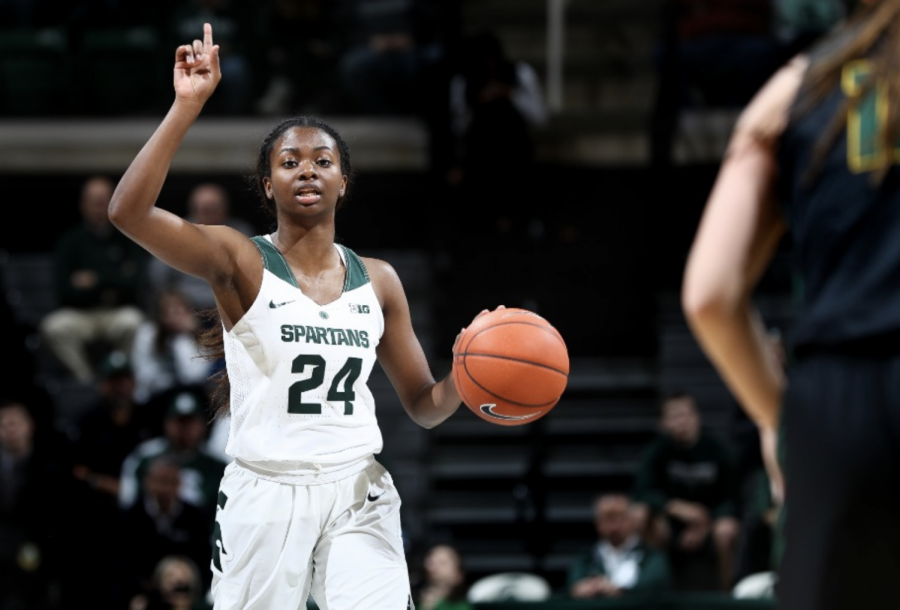 EAST LANSING – The Michigan State Spartans (12-10) faced their in-state rivals and took down the No. 4 ranked Michigan Wolverines on Thursday. Both teams played hard until the end but the Spartans came out on top 63-57 with the upset win.

“The crowd was great which made a really fun environment to play in,” said MSU senior Nia Clouden. “Both teams had a good amount of fans there which helped us feed off the crowd. The fans really showed out.”

Michigan’s Naz Hillmon put up the first points in the game with a layup off of a Spartan turnover, and then three more Wolverine baskets were made. The Wolverines were up with an 8-0 lead with 6:20 left in the first quarter. DeeDee Hagemann put the first points on the board for the Spartans with a basket from behind the arch. Two MSU steals and two Michigan turnovers later brought the score to 9-10 with the Wolverines still in the lead.

MSU got its first lead of the game with 3:46 remaining in the quarter after a jumper from Taiyier Parks. The Wolverines went on a scoring drought that lasted 3:41 and consisted of six turnovers in that time, while the Spartans went on an 8-0 scoring run. The drought was ended with a layup made by Hillmon, and the Spartans then went on to have a scoring drought of their own that lasted 3:51. The Wolverines led 14-11 after the first quarter.

The second quarter started at a much faster pace than the previous had ended, but the Wolverines started to pull ahead. Points from the Spartans came from Nia Clouden and Alisia Smith, but points came from Hillmon, Danielle Rauch, and Maddie Nolan to bring the Wolverine lead to 23-15 with 4:30 left in the half. Both teams went on another scoring drought, with the Wolverines not scoring for three minutes and the Spartans going 1-for-8 in their last field goal attempts. The drought was broken for MSU by Hagemann, and Isaline Alexander put one more in right after. Michigan’s Laila Phelia put in a layup at the halftime buzzer, and the score at halftime was 29-26 Michigan. The Wolverines’ leader for the half was Hillmon with 14 points and six rebounds, and the MSU leader was Hagemann, with eight points and three assists.

Michigan started the fourth quarter strong, bringing the score to 47-49 after a layup and a free throw by Hillmon, and a 3-point shot by Rauch. With 5:42 left in the half, this was still the score after both teams went on droughts. Matilda Ekh went on to score the Spartans’ first points of the quarter with a 3-pointer as the shot clock hit zero. The Spartans continued to go on another run, going 3-for-3 on their last field goal attempts while the Wolverines went 1-for-10 on their last attempts. Hillmon put two shots in for Michigan which brought the score to 56-55 MSU, but Ekh answered once again with a 3-point basket, bringing the lead back up by four for MSU with one minute left of gameplay.

“Nia’s been a great leader, I knew that she was not going to step off this floor without a win,”  said MSU coach Suzy Merchant.

The Spartans will be back in action on Monday, Feb. 14 at home against Penn State.