Duel in the D: Spartans seek to end skid against shorthanded Wolverines 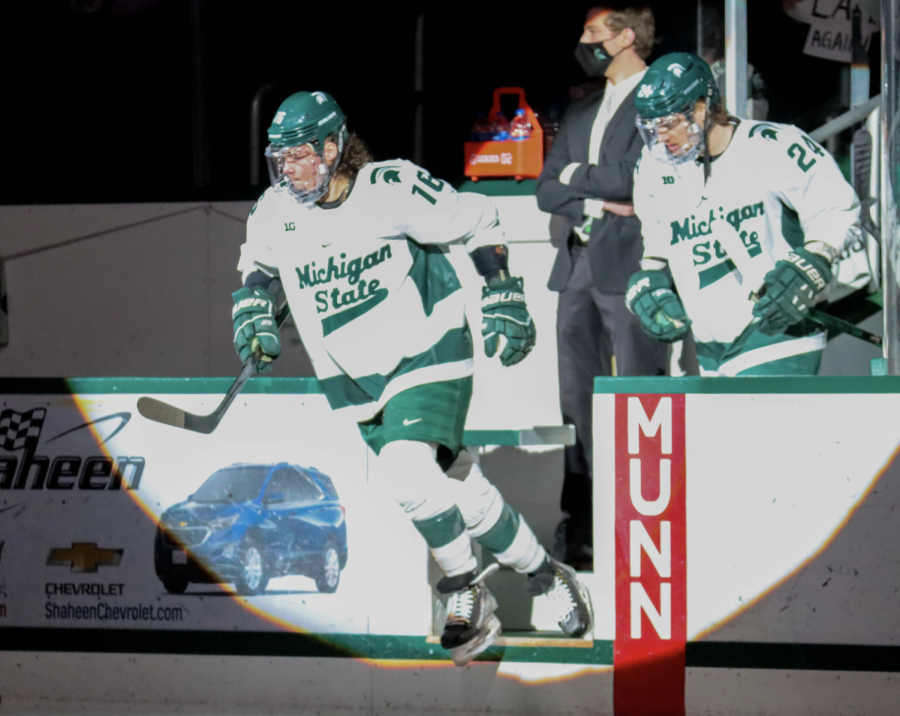 That’s been the theme of the past few weeks for both the Michigan and Michigan State hockey programs. Roster turnover has hit both teams hard.

Michigan, who has rostered four of the top five picks in the 2021 NHL Draft, will only have one member of that quartet – Devils prospect Luke Hughes – available to play. The other three (Owen Power, Matty Beniers, and Kent Johnson) are at the Winter Olympics. 2020 first-rounder Brendan Brisson will also be joining his teammates in Beijing.

Meanwhile, Michigan State’s 2022 has been rough to say the least. It has been without star players Mitchell Lewandowski and Griffin Loughran for all eight games of the calendar year. The team has lost all eight, and the absence of the two forwards has certainly been one of many reasons why.

Now comes a rivalry game, and with that comes an opportunity to throw all that extra noise out the window.

The most-played rivalry in college hockey will add another chapter this weekend, where the Michigan State Spartans will take on the No. 4 Michigan Wolverines. Rather than the usual home-and-home series that these teams usually play, the game that would have been played in East Lansing will be replaced by one in downtown Detroit, dubbed the “Duel in the D.”

This Saturday will mark the 34th iteration of the annual contest. In 2016, organizers added a 50-pound “Iron D” trophy for the rivals to compete for. While MSU walked away with the first trophy, Michigan has not given it back since, winning the next four. The game was not played in 2021 because of the coronavirus pandemic.

While Michigan’s Olympians left for Beijing Feb. 2, the Wolverines are coming off of a bye week in the Big Ten. Save for an exhibition game against the United States National Team Development Program, a 4-3 overtime win, Michigan has not played in a conference game since it thrashed Wisconsin – outscoring them 11-3 over a two-game series in Madison.

MSU got swept by Minnesota last time out. The Spartans fell under siege at times, which became their ultimate downfall. In the first game on Friday, Feb. 4, after going up 2-0 in the first period, the Golden Gophers would score four unanswered over the next two periods to win 4-2.

Saturday’s game would be more of the same. After freshman forward Jesse Tucker tied the game at one apiece, Minnesota scored two goals within two minutes of the final period. The Gophers would win 3-1, and Michigan State would drop its eighth consecutive contest.

How will the absence of Michigan’s Olympians affect them?

Michigan is losing its top four point-getters. Those four have combined for 124 points so far. Losing that much firepower is obviously going to hurt.

However, we are still talking about Michigan. The rest of this team is not composed of scrubs and fourth-liners. They’ll still have Hughes. They’ll still have sophomore forward Thomas Bordeleau who scored 30 points last year. They have senior leadership from guys like Nick Blankenburg and Michael Pastujov.

That doesn’t even count Buffalo Sabres prospect Erik Portillo, who was named to the Richter Award watch list and has made the second-most saves in the entire country (793).

Michigan without its top draft picks is still more talented than a majority of teams in the NCAA. Despite being short handed, the sheer talent the Wolverines possess demands that opponents be at the top of their game.

Does playing at Little Caesars Arena give one team an advantage?

One might think that, given Detroit’s proximity to Ann Arbor, that playing one game at Yost and one in Detroit is essentially two road games. However, both Michigan and Michigan State fans are very well-traveled, and the size of the alumni bases will guarantee that both fanbases show out in numbers. I would expect to see something close to a 50/50 split in the stands.