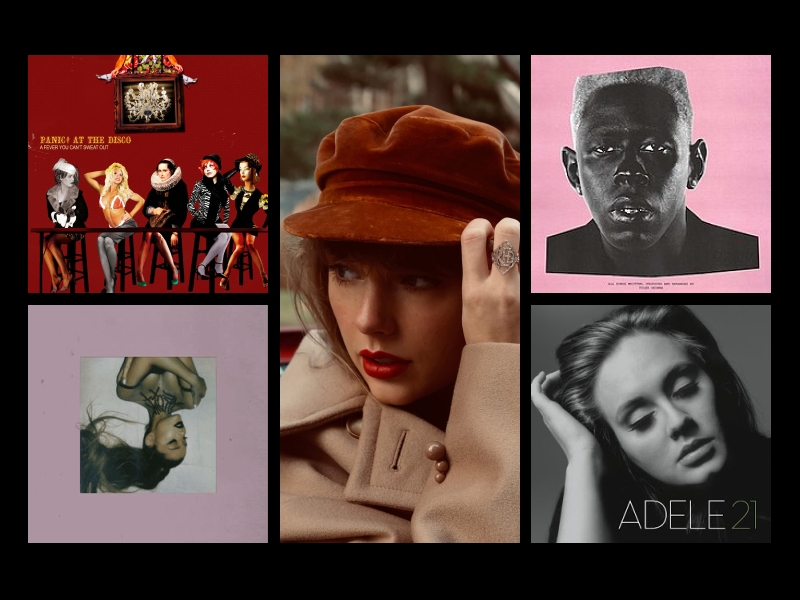 Valentine’s Day, a day that many people dread. Whether you’re unlucky in love or simply hate the price tag it places on relationships, there’s plenty of reasons to feel a bit angsty come Feb. 14. For all our friends in the anti-Valentine’s Day camp, we’ve collected a list of iconic breakup albums to remind us why love is overrated.
A Fever You Can’t Sweat Out by Panic! At the Disco — Sierra McIntosh
As one of the iconic sounds for many scene kids of the early 2000’s, Panic! At the Disco’s A Fever You Can’t Sweat Out doesn’t initially come off as a breakup album. When most people think of this album, the song that comes to mind is “I Write Sins Not Tragedies,” which from first glance portrays a typical wedding. Similarly to the EP itself, the song transitions from that ideal romance into the true theme of cheating.

However, the track “Lying is the Most Fun a Girl Can Have Without Her Clothes Off ” is really the take off point for the cheating theme. Using the number of fishes around the woman in the song’s music video, Panic! Symbolizes how many people she has slept with while dating her boyfriend.

In the song, “But it’s Better if You Do” continues the cheating theme even further. In this case, it’s the husband going to the strip club to cheat on his wife, who — unbeknownst to him — works there. In a way, they’re one and the same for hiding and keeping secrets from one another.

Finally, in “Build God Then We’ll Talk” the theme of cheating concludes itself. Prostitution ties itself in with cheating, and the story tells how a person creates false realities and artificial happiness through doing both.

So, A Fever You Can’t Sweat Out is one of the best breakup albums on the list for a multitude of reasons. A Fever starts off with themes consisting of marriage, alcohol abuse and the media itself. But what makes this album unique is the transition midway through the album: While these other themes conclude; the true theme of the album is blown right into the viewer’s face. The album shows the heartache and repercussions that come with being a cheater. If cheating isn’t a reason for this album to be part of the great breakup albums, I’m not sure what else could be.

IGOR by Tyler, The Creator — Kale Guenther
Coming off of the release of Flower Boy, I don’t think anybody was prepared for what Tyler, The Creator was going to release next. What we didn’t know was that the sheer emotional roller coaster that is IGOR was coming. From the first track, “IGOR’S THEME,” something was different about this.

The album starts off as a simple love album, but the tone changes quickly with “NEW MAGIC WAND.” This song shows Tyler’s anger with his love interest, even saying “I need to get her out the picture.” We can only imagine that the magic wand Tyler refers to is a gun, just like the one the next song, “A BOY IS A GUN*,” is named after.

This angst and anger towards his lover eventually gets remedied in the final song of the album, “ARE WE STILL FRIENDS?” Tyler gets over his breakup and wishes to keep the ex in his life, even if they can only be friends.

I think it’s pretty self explanatory why IGOR is one of the best breakup albums on this list, but if you don’t see why let me explain. IGOR takes you through not only the messiness and emotions that a breakup can cause, but shows what took place before Tyler got to that point. If that isn’t poetic, then I don’t know what is.

Red (Taylor’s Version) by Taylor Swift — Mike Merucci
Taylor Swift’s 2012 album Red has been a heavyweight in the breakup album hemisphere for the past ten years, but it’s fair to say that Red (Taylor’s Version) has tacked on a little extra firepower. This one album holds “We Are Never Ever Getting Back Together,” “I Knew You Were Trouble,” “The Last Time,” “The Moment I Knew” and the recent smash hit “All Too Well (10 Minute Version).” Is there more that needs to be said?

I don’t think more needs to be said, but I’ll keep going, regardless. There are too many titans here: So much of the album is peak lying on the floor, staring up at the ceiling music. Few songwriters have grilled such vivid images of heartbreak into their soundscapes. And the songs that aren’t for ceiling staring are perfect for windows-down, high-volume drives. There’s nothing like blasting “22” and “Girl At Home” deep into the night.

If any more endorsement for Taylor is needed, look no further than the President-elect of Chile, Gabriel Boric Font, who made his country’s undying respect for the breakup album master known in this tweet. As he said, she writes songs from the heart. On this upcoming Valentine’s Day, I know there will be many of us — whether in Chile or the United States or anywhere else — who will be absorbing those songs into our own hearts.

Thank U, Next by Ariana Grande — Paige Drob
Ariana Grande’s love life had the entire world in a chokehold for a majority of 2018 and 2019. Shortly after her split with ex-boyfriend and longtime friend, Mac Miller, Grande entered the most influential celebrity whirlwind romance of my lifetime. Grande and Pete Davidson became engaged just about a month after they started dating and about a week after they were Instagram official.  After five short months of matching tattoos, internet domination and the creation of and release of Sweetener, the relationship came to an end, sparking inspiration for one of the greatest breakup albums released in recent history: Thank U, Next.

The title track “Thank U, Next,” is not your typical breakup song. It is the epitome of growth. Grande does not once slander an ex-lover, or regret her time spent with them. Grande reflects on the lesson she has learned from each and how she has grown into the woman she is today. I mean seriously did your jaw not drop the first time you heard “Wish I could say thank you to Malcolm, cause he was an angel” and “This one gonna last, cause her name is Ari.” Not to mention the song is also just a bop and a half. The album’s other single “7 Rings” continues Ariana Grande’s focus on herself. She accounts her successes and the importance of her friends. “7 Rings” is Grande’s official bad bitch anthem. The rest of the album follows similar themes and explores different aspects of Grande’s relationships. It is safe to say that Thank U, Next is a top contender for top breakup album.

21 by Adele — Madison Reinhold
A defining sound of the early 2010’s, 21 captured the anger, the rage of having your heart broken. Starting with the bold outcry of “Rolling in the Deep,” Adele warns the person who left her scorned to watch out: “You’re gonna wish you never had met me.”

Released in 2011, it taught us about the entire span of emotions one faces when going through a vicious breakup. The tense anger of “Rolling in the Deep,” the furious drum beat of “Rumour Has It,” the desperation of “Turning Tables,” all the way to the solemn acceptance of “Someone Like You.”

The album grapples with wanting to hate the one who broke your heart but still wanting them back. She wanted to make the relationship work, but it just wasn’t worth it. This album covers so many aspects of why falling out of love and breakups just suck, no matter how they end. There’s songs for the sadness of just growing apart; trying and failing to make it work; the sadness and rage of jealousy; or for throwing their stuff out the window and making a dramatic exit.

This album is absolutely one of the most influential albums of the decade, not being able to go anywhere without hearing Adele belting in the background. It influenced every feeling on the spectrum of breakups, creating an emotional and fitting soundtrack for every post-heartbreak mood we find ourselves in, even if it means we’re just sitting in a corner crying to “Someone Like You.”

Have strong feelings about these albums? Be sure to vote for your favorites every day until Feb. 14 in our Valentine’s Day album bracket battle on Twitter @WDBM.