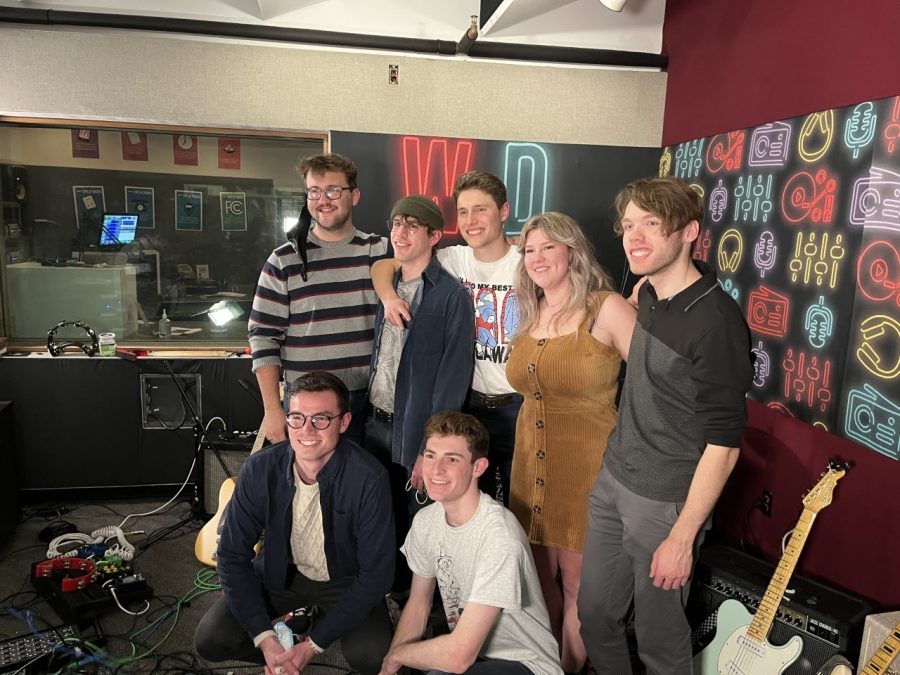 As the chill starts to worsen and the memory of those warm summer days begins to fade, for me, music is the best medicine. Here to help with the dreary winter days is none other than Michigan’s own indie surf-pop band Pretoria. As a native South African who spends their summers on the beach surfing of course I would be drawn to an outfit that shares its name with my home country’s capital. I was thrilled to hear they would be featured on Impact’s newest broadcast of The Basement!

Live Music Director Abbi Wynsma and Station Manager George McNeil hosted Thursday’s  episode. As the band members of Pretoria were filing in, there was a sense of familiarity and friendliness amongst everyone. Soon after, I learned Matt Burdick— the guitarist — was an Impact alum and the previous live music director. The conversation was light and full of banter , making for some great radio. The band’s first song, “Keep Two-Stepping,” was their most famous. The song is complemented by a catchy drumbeat mixed with a nice strumming guitar. Hearing the song live helped me pick out the tambourine in the background. After the song, the band explained how they came up with Pretoria. Apparently, a friend of the band had a list of cool ideas and they chose Pretoria. Disappointing for me that there was no connection to South Africa. Nonetheless, it’s an excellent band name.

The second song of the night was “Skinny Dip,” which was the perfect “Remember that warm weather” song. The fast guitar and summer-inducing lyrics were excellent. After the song was over, the band spoke about some of their influences, mentioning big names like the Beatles, Daft Punk, Vampire Weekend, and the Strokes. The band also spoke about some artists they would like to collaborate with, such as folk artist Jack Stratton and producer Kenny Beats.

The next song was “Gently.” With Valentine’s Day around the corner, perhaps it’s nice to change it up with an anti-Valentine’s Day song. The band spoke about the Latin influences in the music and how they were inspired by the band Her’s. The song had some touching lyrics and was wonderfully complemented by the sweet guitar.

“Speak to me gently /

Your jar of hearts is getting heavy /

And I’m a long way from accepting /

Why we can’t have a happy ending.”

After the touching song, the band went to speak about how concerts are beginning to open back up and their excitement to perform again. The band emphasized how the joy they see in the fans while performing reflects on them and gets them even more eager. Live concerts are some of the band’s favorite ways to spread their music, and they play their best to win over new crowds.

The last song was a special premiere: the band’s cover of Neil Young’s “Harvest Moon.” This was my favorite part of the night, and it was an indie-like cover of Young’s tune. Released on Jan. 28, the song comes at a perfect time for Spotify users after Young removed his music from the site. Now you can still listen to a version of the classic track.

Thank you to Pretoria for your excellent performance and for being great guests for Abbi and George. Your summer sound will feature in my playlists once I’m back on the beach with my board and these winter woes are behind us. Join us next Thursday between 8-10 p.m to hear the next session from The Basement for another Michigan sound!