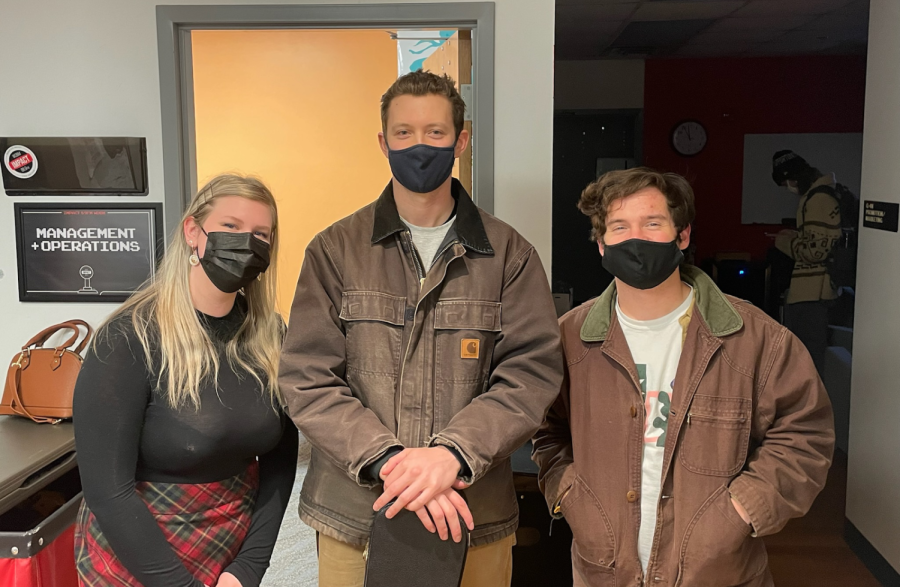 It was a little bit cold outside on Thursday, Jan. 20, 2022 — a pleasant 17 degrees Fahrenheit to be exact. Could have been worse. Certainly could have been better. But down in the basement of Holden Hall in the shining bastion of warmth that is Impact 89FM, those depressing, post-holiday winds and ice sheets couldn’t raise a finger. This unpleasantly cold day happened to host the spring semester’s first edition of The Basement! And what better way to welcome the program back than with a performance by an Impact alum?

Conor Lynch, known on-air as DJ Nor, DJ CJ and DJ Con-Con, was formerly the engineering director and a DJ at Impact 89FM. He grew up in rural Northern Michigan, where he was exposed to a vibrant folk music scene that helped form him into the musician he is today. He’s released three albums thus far: lameboy in 2017, people don’t think it be like it is but it do AND don’t in 2019 and Fake in 2021. Joining him in studio were Live Music Director Abbi Wynsma and Music Director Mason Vore.

To kick off the program, Conor played “Bleed” off his album Fake. A fitting start, as the lyrics display a love affair mixed with contempt, fatigue and betrayal — feelings often associated with the cold winter that was winding through the streets above. In contrast to lyrics like “I know it’s been your plan all along, pretending like you’ve done nothing wrong,” and “You’ve been lying through your teeth, so stop smiling at me,” Conor’s guitar spoke warmly. The gentle strums held a fascinating dynamic with these words: In the same wave, these sides fought and synchronized, highlighting each other in the process.

When it comes to the second song Conor played, I’ll just say I’m in love with the lyrics. Some quotes from “King of It,” also off Conor’s album Fake, include “I’m so fucked, I’ll steal a truck,” and “This is my pile of shit, but I’m still the king of it.” Unfortunately, he couldn’t say those exact words for the radio performance, but what I found unique about this track was the way in which Conor’s instrumentation teetered back and forth against pillars both upbeat and melancholy. It held a grip over the studio, swaying and swaying until an end of quiet triumph where Conor sang that everything is under control, “‘Cause my life is in my hands, my father told me the way to the promised land.”

After “King of It” it was time for a little bit of conversation with Abbi and Mason. Abbi had shadowed under Conor a couple years ago, so it’s great to see how the Impact 89 wheel keeps turning and turning. Even after students have graduated and left the station, many remain connected in some shape or form. For Conor, being back felt a little odd. At first, he said it was “Fine, I guess.” Fair. But with guitar in hand, he was confident at the mic, seemingly at home in his music. Part of this comfort can be attributed to his time at Impact 89FM. He learned a decent amount about the music sphere from his time as engineering director and was able to branch out by being a DJ.

When asked about how his interest in music started, Conor said it was fostered in him from an early age. He had grown up with folk music all around him and started taking piano lessons around the age of ten, but classic rock always seemed to be calling out to him. Bands like Led Zeppelin sparked his love for guitar, but as he learned the instrument, he ended up falling back into what he had known from an early age: folk.

Inspirations like Alex G, Big Thief and Neil Young are evident and respected in Conor’s work, and his performance for The Basement shows that. He and his guitar were quiet and subdued, yet strong in honesty and emotion. And, even though he is a musician, he believes he is still an appreciator/fan before he is a creator. He is always learning, always becoming inspired by others as he paves his own path.

As Conor continued performing, it was clear he had settled in perfectly. The relaxation, the sense of being at an extension of home — it was greatly evident. As he rolled through more of his discography, conversations between him, Abbi and Mason grew livelier, those in attendance nodded along to the music more and more. In short, it was great to have The Basement back, regardless of how cold it was outside.

To reference the cold one last time, I’ll go with what Conor said when talking about the title of his 2019 album people don’t think it be like it is but it do AND don’t: “It doesn’t really mean anything.” Too true! Too true! When we have live music and friends to watch or listen with, the cold doesn’t really mean anything. Until a blast of wind freezes your eyebrows and eyelashes while walking out to the car, that is. BUT STILL! I’d take that icy punch to the face for The Basement any day of the week. And for those who wouldn’t, there’s always the airwaves. Make sure to tune in for the 8-10 p.m. slot on Thursdays if you want to hear some awesome live music and interviews directly from The Basement!