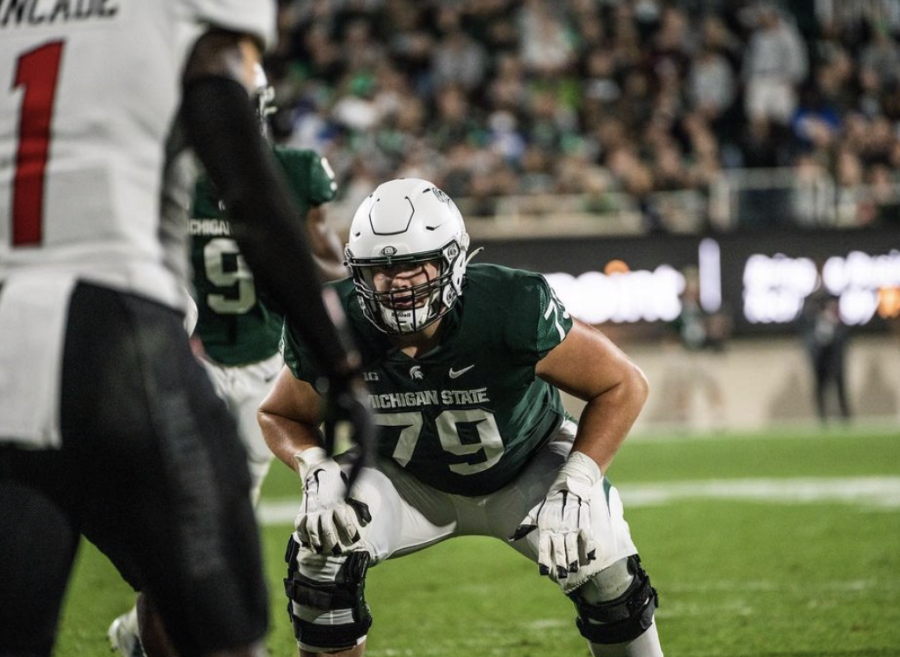 EAST LANSING, Mich—After an exceptional season during which he solidified the left side of the Michigan State offensive line, All-Big Ten Honorable Mention selection Jarrett Horst announced on Twitter Friday that he would return for his second season with the Spartans, his fifth overall in college, and ultimately forgo the 2022 NFL Draft.

Horst, a 6-foot-6, 305-pound offensive tackle, played his high school football at Middletown High School in Middletown, Wisconsin, and was a letterwinner all four years. In addition he was both an All-Conference and All-Area selection. He also was invited to, and played in the Blue-Grey All American Game.

As a recruit, Horst did not receive much attention, and was 247Sports No. 206-ranked offensive guard in the class of 2018 as well as being ranked the No. 29 player from the state of Wisconsin. He decided to start off his college playing career at Ellsworth Community College in Iowa Falls, Iowa.

Following a solid season in Iowa Falls, and a position change, Horst entered the transfer portal, and received more ranking consideration, being ranked the No. 34 offensive tackle in the 247Sports Junior College rankings for the class of 2019. He was also ranked the No. 17 player from the state of Wisconsin. Horst received three Division 1 FBS offers, from UMass and Buffalo, before ultimately choosing to enroll at Arkansas State and play for the Red Wolves and head coach Blake Anderson.

Horst played two seasons in Jonesboro, playing one year under Anderson, and another under former University of Tennessee head coach Butch Jones. During his sophomore season, he was named Third Team All-Sun Belt after playing a total of 941 snaps and starting all 13 games at left tackle. Horst entered the 2020 season on the Outland Trophy watch list and was named preseason All-Sun Belt First Team.

He played a total of 500 snaps over seven games for the Red Wolves his junior season before entering the transfer portal on Dec. 14th, 2020. Horst had a short stay in the portal, and committed to Michigan State five days after announcing his intent to transfer, on Dec. 19th.

This year, Horst was a key part of a transfer class that provided stability for a football program coming off a 2-5 2020 season. He was named as an All-Big Ten Honorable Mention selection by both the conference coaches and the media after starting eight games at left tackle for the Spartans, playing a total of 317 snaps.

His return will be key for an offensive line that is retooling after losing offensive tackle Kevin Jarvis to the draft and starting center Matt Allen, as well as right tackle AJ Arcuri and possibly versatile guard Blake Bueter, to graduation. Key reserve tackle Luke Campbell, who appeared in 10 games this season, is also out of eligibility. As of now, the Spartans are set to return starting left guard JD Duplain, center Nick Samac, right guard Matt Carrick and right tackle Spencer Brown, who started in the Peach Bowl.