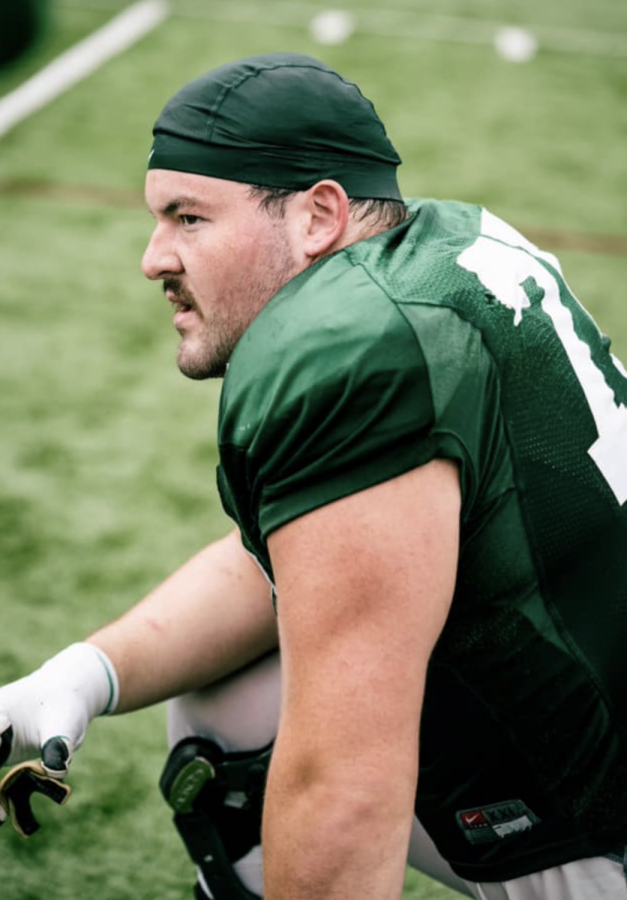 EAST LANSING, Mich—Following an exceptional senior season and career during which he was an All-Big Ten selection on multiple occasions and appeared in 44 games dating back to 2017, Michigan State football offensive lineman Kevin Jarvis declared for the 2022 NFL Draft.

He will finish his MSU career with 39 games started at three positions (right guard, right tackle and left tackle) and is the second Spartan to declare for the NFL Draft after running back Kenneth Walker.

Jarvis, a 6-foot-6 graduate senior from Park Ridge, Illinois, played his high school football at Maine South High School and was named as the 2016 Chicago Tribune Preps Plus Football Player of the Year after Maine South won the Class 8A State Championship in his senior year.

He committed to MSU on March 31, 2016, despite holding offers from Michigan, Florida, Auburn, Tennessee, Minnesota, Arkansas, Missouri and a host of other Big Ten and Power Five schools.

As a Spartan, Jarvis had an extensive career, garnering numerous accolades throughout his five years in East Lansing. He started all 13 games his freshman season, receiving honorable mention All Big-Ten accolades as well as an honorable mention spot on the BTN All-Freshman team in 2017. He also broke the record for games played as a freshman lineman under former Spartan head coach Mark Dantonio.

During his sophomore and junior season he struggled with injuries, playing 12 of a possible 26 games while eventually redshirting his junior year after suffering a season-ending injury against Arizona State on Sept. 14, 2019.

He reestablished himself when head coach Mel Tucker arrived on campus, starting all 20 games at right tackle and right guard, over the past two seasons. In 2021, Jarvis started the season as the Spartans’ starting right guard, but was moved out to right tackle with the absence of Jarrett Horst in the final four games of the season.

For his efforts, both the media and the Big Ten coaches named him as an honorable Big Ten selection at the conclusion of the 2021 regular season.