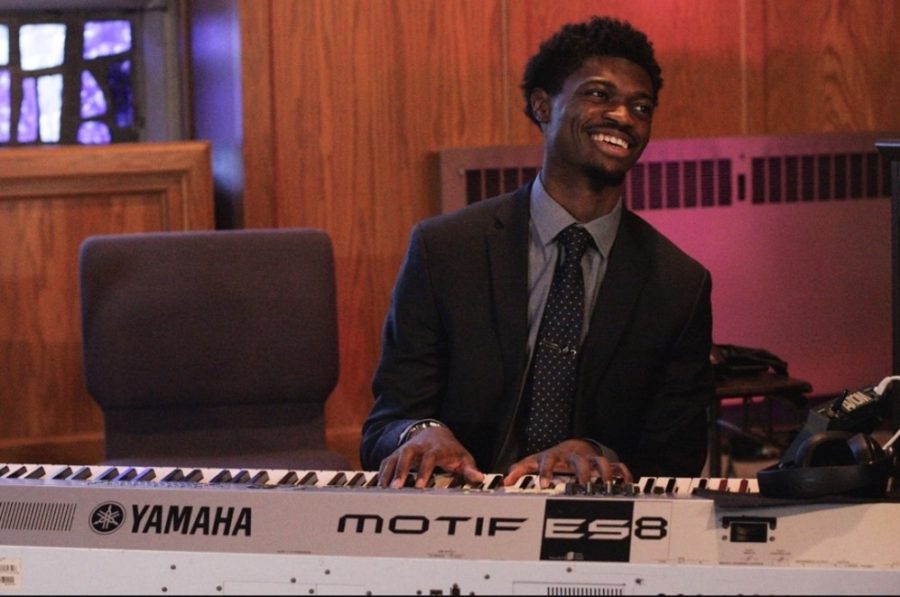 Sean practicing the piano at church

EAST LANSING – As Sean Holland II develops his philosophy around music, one of the major points of it is that he has learned that music is an outward expression of the innermost being. For him, he feels like himself when he sings in the purest form and vulnerable state. Holland is a senior at Michigan State University majoring in vocal performance and music education.

Many performers are inspired by other performers who became rich and famous. Holland may have been inspired by his favorite singers to some degree, but his main inspiration came from a different source.

“Honestly, my father and mother inspire me the most. All of my life, I’ve seen them pursue their passions, calling, purpose, and they’ve done it without apology. I’ve seen them have great success. Also, I have learned how to handle failure and conflict through watching them and their leadership. They inspire me the most and it bleeds over into everything that I do,” said Holland.

“I have seen Sean perform quite a few times. My favorite moments are when he plays the piano and sings. Usually those nearby gather around and sing with him. It’s a good time,” said Phoenix Miranda, an MSU student studying voice performance and entrepreneurship.

Miranda added, “Having a friend that likes to perform means I feel seen and heard as a fellow performer. Sean’s talent has opened doors for performers like me. I can break out in song at any moment and know that I will not sing alone.”

When asked what song best describes you, this is what Holland had to say.

“The song that best describes me would be Unforgettable by Nat King Cole. I think the energy of the song really speaks to who I am as a person, the type of atmospheres that I like to create around myself, and the type of people that I like to keep around me. Also, just the premise of the song saying that someone is unforgettable. I like to think that when you have an encounter with me, hopefully it will be a positively unforgettable moment and that we could foster a relationship that would last, if not several seasons, then a lifetime,” said Holland.

He added, “Giving myself over to the lyrics, the theatrics behind the performance and just presenting my gifts for the audience in a way that hopefully it speaks to them. Hopefully it will brighten their day or maybe encourage them with something that they’re going through. Or help them to find an answer or a question to something that would be a positive impact for their life.”

“It has been a joy to have Sean as a student of mine. Sean represents everything I value in a student; intellect, talent, discipline, curiosity, generosity, and humanity. In the musical arts, I long ago determined that it was imperative to be a great human being before becoming a great artist. Sean is a great human being, and he owns his weaknesses as well as his strengths,” said Richard Fracker, a voice and music practice professor at MSU.

Fracker added, “Lessons, rehearsals, performances and mentoring sessions are always interesting and challenging in the best way possible. He is eager to learn, and I eager to teach. I always look forward to working with Sean regardless of whatever happens prior to his lesson. It is very fulfilling to work with someone like Sean who has a talent and aspiration to challenge the best of teachers.”

Holland might be in the College of Music at MSU for his voice, but he also has a talent for playing the piano. Although, here is what he said when asked if playing the piano is a challenge for him.

“I would say yes, but I think that I like to challenge myself in anything. One of the reasons why I chose to study classical voice for a time was because it was a challenge for me. I’ve had other opportunities to do various genres, but I found that I would be stretched the most in a genre and in a world that I was the most unfamiliar with. And five years later, I find myself a better vocalist, pianist, artist, and performer as a cognitive musician. So, for me, it’s all about finding the next challenge and pushing myself to overcome it,” said Holland.

He added, “I think every musician has an internal fire that can’t really be described. But you know, nobody forces you to sing. Nobody forces you to play. It’s really on your own volition and your own personal aspirations and dreams in the art that keep you going. For me, it’s just that thing inside of me. It’s that vision of how I see my career. Until I manifest that, until I see it, until I realize that, then I’m going to keep going after that. And even when once I get there, I know that there will always be another level. I think one thing that really encouraged me was when I learned that the greats, like Chick Corea and so many others, never stop practicing. Practicing is just fundamental to what we do as artists and as performers. That’s just the foundation of it. When we get on stage, it frees us up from having to think about our instrument. So, the more I practice, the more proficient and better that I become on stage. I’m freer to express the ideas that I have in the music.”

“I’ve known Sean now for about 13 years. I have to say my favorite thing about him is his fearlessness. He’s always doing something uncommon,” said Jaylen Parker, friend of Sean’s and a senior studying electrical engineering at Lawrence Tech University.

Parker added, “The thing about Sean is that he’s so versatile that there is nothing that he puts 110 percent into and doesn’t kill it. He does everything! He can sing, write, produce, act, play piano, coach vocally, and do it all at the same time if need be. Personally speaking, I would love to see him hit the center stage on Broadway. I’ve seen his performances before, and you can tell that the stage loves him. I always joke with him that I would quit everything and become his manager or something. But he has yet to take my offer.”

Many singers dream to perform at places like Madison Square Garden someday, but not Sean Holland II.

“I want to perform at Buckingham Palace. I don’t have a specific reason why, but I’ve always had a picture of me singing for kings and queens. When I think about kings and queens, that’s the quintessential monarch that is Great Britain. To sing there would be a great accomplishment and achievement. It would be something special and something that everybody doesn’t get to do,” said Holland.

Finally, he wanted to give advice to people who are hesitant with sharing their gifts with the world.

“I would say to that person do what feels right to you. Do what’s in your heart. If you feel that you want to share your talents with the world, share them. No matter what someone else thinks and no matter if somebody is against it. At the end of the day, if they don’t want to listen to it then they don’t have to. Don’t let anybody force you to share anything that you don’t want to share. Just follow your heart and do what feels right to you,” Holland expressed.