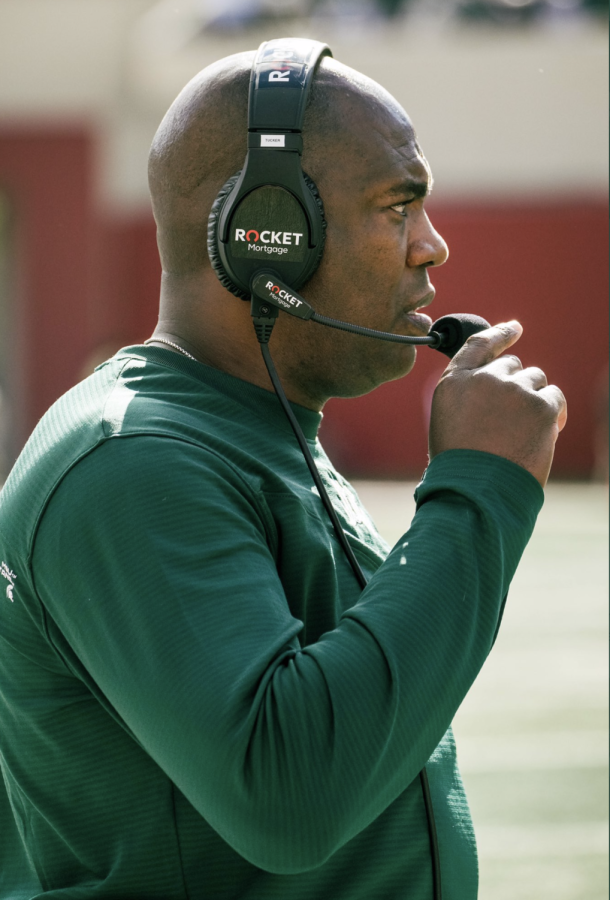 EAST LANSING, Mich—After going 10-2 in his second season and first full season as the head coach at Michigan State, Mel Tucker has been named the Big Ten Coach of the Year by both coaches and the media.

Tucker led MSU to a school record eight game turnaround, and he became the earliest Spartan coach to record 10 victories in a season.

Currently, MSU is ranked No. 11 in The Associated Press Poll and No. 13 in the USA TODAY/AFCA Coaches Poll. The Spartans have been ranked in the Top 25 of the national polls for 11 consecutive weeks, six of those weeks in the Top 10. MSU has also been ranked every week in the College Football Playoff Top 25 this season.

He is also the first coach in school history to win his first two games against the Michigan Wolverines, this year beating the then No. 6 squad 37-33 on Oct. 30.

He is the sixth Spartan head coach to be named Big Ten Coach of the Year and just the second to win the award from both the coaches and the media. Mark Dantonio was the first to do so in 2013, a year in which MSU went 13-1, won the Big Ten championship over No. 2 Ohio State and the Rose Bowl over No. 5 Stanford.

Baringer currently leads the Big Ten and ranks third in the FBS in punting average (48.6); he is also tied for first in the Big Ten with 25 punts of 50-plus yards while Panasiuk is tied for third in FBS in QB pressures (67). He also ranks eighth in the conference in sacks (6) and 16th in tackles for loss with nine.

Reed was named a Paul Hornung Award finalist as he is the only player in the Big Ten with two punt return touchdowns. He also ranks second in the Big Ten in combined kick return yards (589) and fourth in kick return average yards (23.4).

Henderson ranks eighth in the Big Ten in tackles (94) and 12th in tackles for loss with 10. Slade, meanwhile, leads Big Ten defensive tackles in quarterback pressures (37) and quarterback hurries (32), according to Pro Football Focus.

Coghlin is 11-for-17 on field goals and 39-for-39 on PATs this year while Crouch ranks 11th in the Big Ten in tackles per game (7.5). Coghlin currently ranks first in school history with 75 field goal kicks and is tied for first in total points (377) with former kicker Brett Swenson.

The Spartans are currently waiting for things to wrap up as conference championship games will be named on Sunday at noon.  MSU is hoping to be named to a New Year’s Six bowl game with a chance to finish in the top 10 in this year’s final rankings.