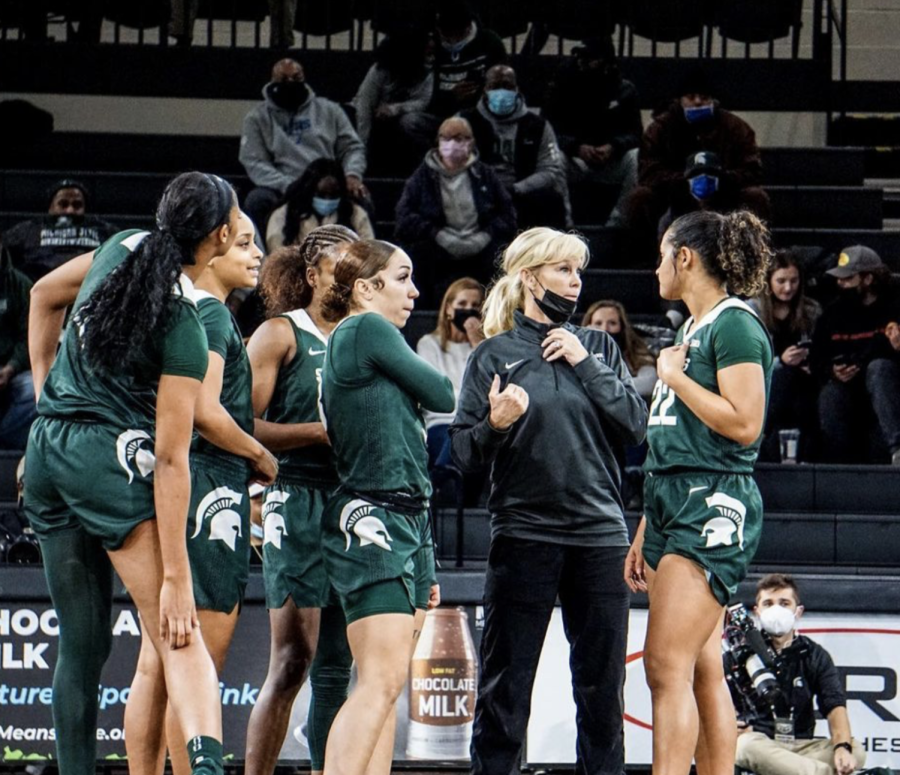 EAST LANSING — The Michigan State Spartans returned home on Sunday and got a hard-fought 85-75 win against the Marshall Thundering Herd in their fourth game in seven days after a disappointing 1-2 road trip. But the victory came with anything but ease.

The Spartans started off the game in attack mode, raising the tempo and pushing the ball down the court and getting plenty of good looks down low in the paint. Because of this, the Spartans shot 10 free throws in the first quarter alone on their way to a 24-19 lead.

Senior forward Alisia Smith really asserted herself just minutes into the game. She started off 3-for-3 shooting and had six early points to jumpstart the Spartans’ offense.

“I think my team expects for me to do something at least productive with the ball, whether that’s passing, or today was making the shots,” Smith said. “I think that was very important for the team to get started.”

However, besides Smith’s hot start, the first quarter belonged to freshman guard DeeDee Hagemann. She came off the bench early in the first quarter and proceeded to lead the Spartans with eight points at the end of the first quarter, including a couple hard-fought and-1s, one of which was the rare four-point play.

“(DeeDee) has been really good,” senior guard Nia Clouden said of the freshman. “Every time she comes in, whether it’s practice or in the game, she knows her job is to bring energy, and she does a great job at that.”

The second quarter is where things went a little sideways for the Spartans. A few early fouls put the Herd in the bonus just a minute and a half into the quarter. The Herd capitalized, taking a 27-26 lead with seven minutes left in the half on a 3-pointer by guard Savannah Wheeler, who led all scorers in the first half with 19 points.

The Spartans just couldn’t keep pace with the Herd’s perimeter shooting in the first half. The Herd shot 50% (6-for-12) from behind the arc in the half, and the Spartans shot 67%, but only attempted three 3-pointers in the half and were on the wrong side of trading twos for threes.

So far in the early part of the season, one of the factors that has really hurt the Spartans has been turnovers. In the first half, the Spartans turned it over eight times, and it led to extra shots for the Herd, which they capitalized on by taking a 46-40 lead into the locker room at the halftime break.

The Spartans ramped up their defensive intensity and became the team forcing turnovers rather than committing them early on in the third quarter, forcing three in the first two minutes of the half. The Spartans came within a single point multiple times in the third, but due to missed free throws and more turnovers, they were never quite able to get the one basket that would allow them to take the lead.

But once again, as they have many times in the past, the Spartans turned to Clouden to lead them back. Clouden had a monster third quarter, scoring six points and dishing out two assists in the quarter before having to go to the bench late in the quarter with four personal fouls.

Clouden’s biggest play of the game didn’t even involve her shooting the ball. With just under two minutes to play in the third, Clouden drove to the basket before kicking the ball out to a wide open Moira Joiner in the left corner for a 3-pointer that gave the Spartans a 61-59 lead. The score was tied at 61 at the end of the third.

That bucket gave the Spartans the momentum once again, and they needed every bit of it as the game turned to the fourth quarter.

Clouden is one of multiple Spartans that has been dealing with illnesses in the past few weeks, but that didn’t stop her on Sunday. Clouden came close to a triple-double, adding eight assists and six rebounds to go along with her team-high 24 points.

“(Clouden) just grinds it out, and I think that says a lot about her,” said MSU coach Suzy Merchant. “Great players do that, they show up regardless of the circumstances, and she’s been very consistent for us.”

And after a good first quarter, followed by back-to-back quiet ones for Alisia Smith, she played her best when her best was needed in the fourth quarter, coming up with two game-changing blocks to help seal the victory.

“I really loved her output numbers today,” Merchant said of Smith. “I thought she did a really good job as well at communicating out there defensively, she knew what was in front of her, she was a force.”

The Spartans move to 6-2 on the season and will get a much-deserved couple days off before a massive showdown against the Notre Dame Fighting Irish at the Breslin Center on Thursday in the ACC/Big Ten Challenge.

“We’re about to find out,” Merchant said about where she believes her team is at with conference play looming. “I think our toughness has to be a little grittier, and people have to be consistent in the way they perform too. We just got to go to work, Notre Dame is really good … we’re gonna have to bring it for sure.”