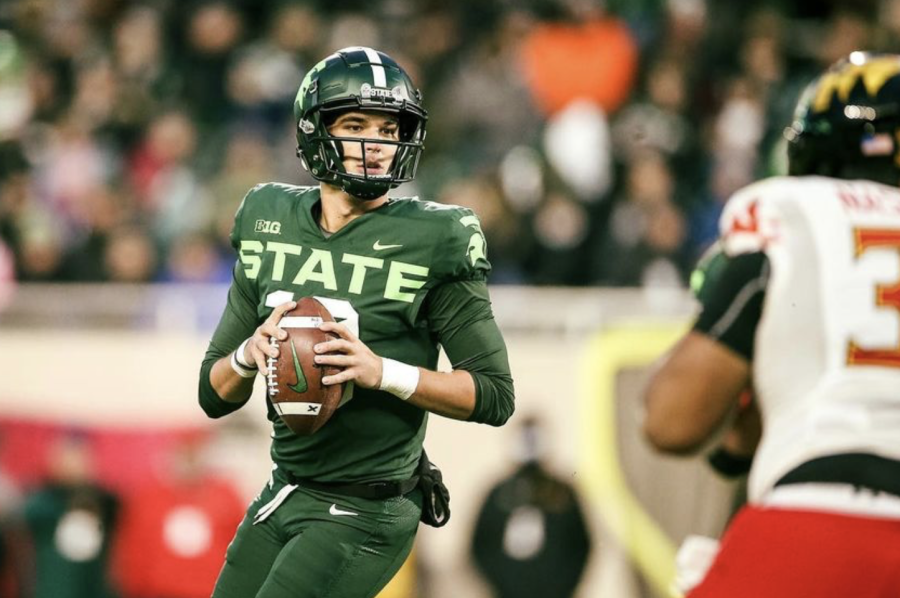 Columbus. Ohio — It was as if everything No. 7 Michigan State football had accomplished this season was thrown out the window after Saturday’s 56-7 loss to No. 5 Ohio State.

While a season that has surpassed all preseason expectations for Spartan coach Mel Tucker and his program, this loss leaves a sting on what many would have considered to be a dream season.

The entire country witnessed a top-10 MSU team walk off the field facing a 49-0 deficit at halftime, putting an end to all talks of the Spartans’ contention for the Big Ten East and a spot in the College Football Playoffs. Not only that, but any debate over the Heisman Trophy Award race was also put to bed, as Buckeye quarterback C.J. Stroud recorded 432 passing yards in OSU’s blowout win.

MSU’s weaknesses within its secondary were no secret going into this top-10 matchup, but most of the Spartan faithful might have argued the MSU at least had a fighting chance.

An early 21-0 Buckeye lead at the end of the first quarter would end those hopes immediately. In just the first quarter alone, OSU put up 278 total yards on offense, 241 of which came in the air. It was held to only one third down in the quarter and was even able to convert on it.

The Buckeyes only ran one more offensive play than the Spartans before the start of quarter No. 2.

It was more of the same for OSU in the second quarter, as the MSU secondary continued to get beat play after play. The Buckeyes would achieve 15 first downs in the quarter, once again only having to settle for a third down once.

The OSU defense held the Spartans to merely 27 total offensive yards in the entire second quarter.

A 49-0 halftime lead by OSU was attributed to two touchdowns apiece from Buckeye receivers Chris Olave and Garrett Wilson, a TD from Julian Fleming and Jaxon Smith-Njigba and a rushing TD by Miyan Williams.

Neither team would score in the third quarter, but a quarter-ending MSU drive would set the Spartans up nicely for their first points of the game.

It was MSU freshman wide receiver Keon Coleman who had the honor of securing MSU’s first and only points, as he brought in a 12-yard pass from Spartan QB Payton Thorne in the end zone. It was the first TD of Coleman’s collegiate career.

MSU Star running back Kenneth Walker III rushed for just 25 yards in the contest, his lowest-performing mark of the season.

OSU would score one more time late in the fourth quarter, as Buckeye running back Master Teague III found the end zone on a rushing TD, making the final statement in the 56-7 victory.

“We’re very very disappointed as a football team,” Tucker said following the loss. “However, we need to focus on what’s next for us. We have to look at the film … we have to own the performance; We can’t lie to ourselves.”

The Spartans will have their final home game of the season next Saturday when they host Penn State. A double-digit number in the win column is on the line for MSU.