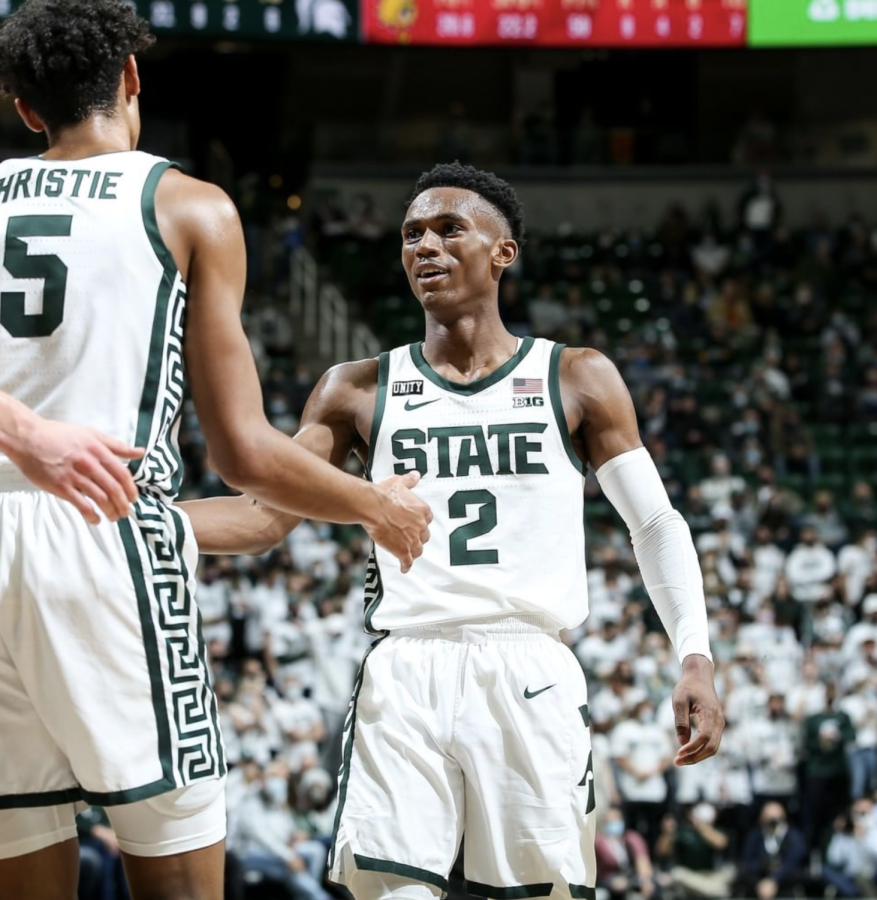 INDIANAPOLIS — The Michigan State Spartans (1-1) traveled to the historic Hinkle Fieldhouse to take on the Butler Bulldogs (3-0) as part of coach Tom Izzo’s coveted non-conference schedule and the Gavitt Games. The Spartans were able to take care of business, leaving Indy with a 73-52 victory, their second of the young season.

The first moments of the game were all Marcus Bingham Jr. The Spartan senior big man won the opening tip, slammed home the first points of the game after an offensive rebound, and blocked two Butler shots all just 1:04 into the game.

The sellout crowd of 9,100 had a respectable amount of MSU fans. The game was also Izzo’s 900th as head coach.

“I’d like to say to all the people down here, this was a thrill for me,” Izzo said. “This was a bucket list thing and it met every expectation… other than Gene Hackman not showing up… it was a hell of a day.”

The Spartans maintained control in the opening minutes, enjoying a 13-5 lead at the 15:28 mark thanks to a nice in-and-out move for a layup from freshman guard Max Christie. He would later put the Spartans ahead 18-8 with a 3-pointer.

Izzo had been vocal about senior captain Gabe Brown getting to the free throw line more often, and that’s just what he did at the 12:55 mark. He knocked down both shots.

Christie continued to feel it on the offensive end, knocking down a Kobe Bryant-esque fadeaway jumper from the left elbow to bring his scoring total to seven points halfway through the first half. He would go on to finish the half with a team-high nine points on 4-of-5 shooting in 17 minutes.

“I tried to come into the game a little more assertive and be more aggressive,” said Christie. “I think I did a good job (of that).”

The Bulldogs even had trouble handling Mady Sissoko down low, as Butler’s Bryce Golden picked up two fouls by holding Sissoko on rebound efforts. The size advantage was something that the Spartans were looking to exploit all game long, with Brown calling the Spartans’ aggression close to the basket a “very big advantage.”

With MSU leading 22-11 with 10:28 in the half, the two teams hit a wall. Neither team scored again until the 6:02 mark, with an Aaron Thompson layup for Butler. The sloppy stretch contained a combined six turnovers, seven fouls (none of them shooting) and seven missed shots by both teams.

After a Butler 3-pointer from Chuck Harris to pull the Bulldogs within eight points, Brown answered for the Spartans with a 3-point play of his own with 3:47 to play in the half. The closing minutes of the half saw both offenses stall a bit once again, but it was the Spartans holding onto a 31-23 halftime lead.

One Spartan who really struggled in the first half was Joey Hauser, who got the start at forward. He finished the half with zero points (0-for-5 from the field, all 3-point attempts) and three turnovers.

Leading the Bulldogs in scoring at the break was Harris with six points. Perhaps the biggest disparity between the two teams was the stifling Spartan defense parlayed with the woeful Bulldog offense, as the Bulldogs shot just 25.8% from the field while the Spartans shot 42.3%.

Harris came out firing in the second half, knocking down a pair of threes. Luckily for the Spartans, Christie nailed one of his own right after Harris’ second to keep the Spartans up by nine.

Some mental mistakes from MSU opened the door back up for Butler, as a lane violation wiped away a Tyson Walker free throw and an offensive foul on Marble. He was able to redeem himself with a mid-range jumper to put the Spartans up 11, 39-28 with 16:47 to play.

Golden picked up his third and fourth fouls on back-to-back possessions for MSU and was subbed out. Bingham pounced on the opportunity with an and-one layup that put the Spartans ahead 47-30, their largest lead of the game. He followed it up with yet another blocked shot on the other end.

Midway through the second half, Hauser and A.J. Hoggard both missed the front end of two 1-and-1 free throw opportunities for the Spartans. Butler was unable to capitalize, however, and a pair of free throws from Christie followed by a Brown 3-pointer had the Spartans up 54-38 with 7:49 to play.

Hauser finally found his way into the scoring column with 5:48 to play after being fouled on a layup attempt off an offensive rebound. He converted both free throws to put the Spartans ahead 56-41. Following an ensuing Butler turnover, Brown hit a transition 3-pointer to give the Spartans an 18-point advantage.

Butler entered desperation mode, shooting quick threes and full-court pressing when the Spartans inbounded. They managed the cut the lead to 13, but the Spartans wouldn’t give it up, handing Butler its first loss of the season.

The Bulldogs shot the ball slightly better in the second half, but still only managed 28.6% from the field in the game, with the Spartans firing at 46.9%. Leading the Spartans in scoring was Brown with 19, with help from Christie (18) and Bingham (10) as well. Bingham also grabbed five rebounds and blocked a whopping six shots.

“Marcus (Bingham) had a block party,” said Izzo. “That really changes your defense.”

Groce was the Bulldogs’ leader in scoring with 15 points, with Harris adding 13.

The Spartans return to East Lansing to host the Eastern Michigan Eagles on Saturday. Follow WDBM for all of your game and season coverage.