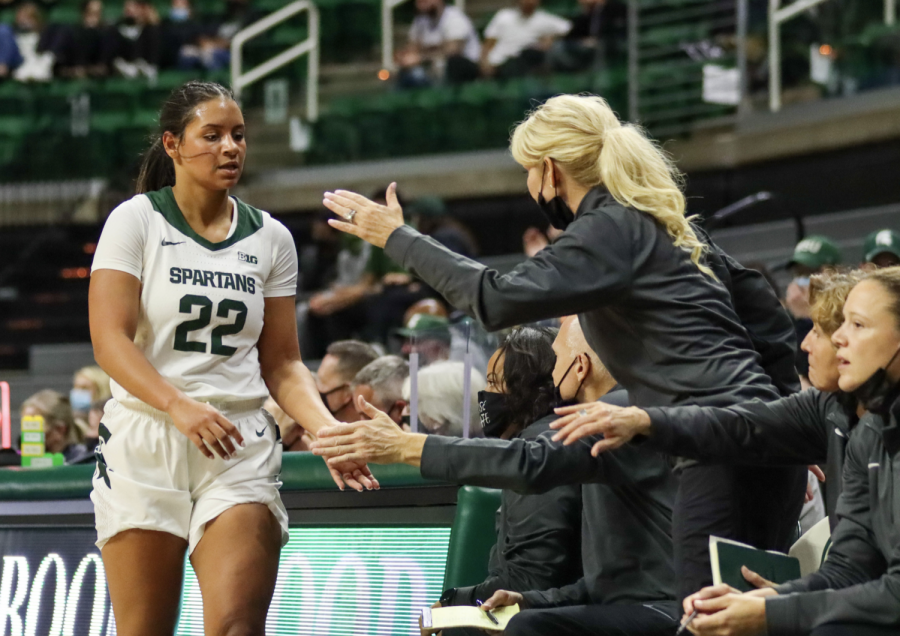 EAST LANSING — It was a historic night for Michigan State coach Suzy Merchant on Tuesday, as the Michigan State Spartans defeated the Valparaiso Beacons 73-62. The win was Merchant’s 500th in her illustrious career and also her 299th as the Spartans’ head coach.

However, the slow start didn’t faze junior guard Alyza Winston as she started off scorching hot, scoring 12 points in the quarter, including shooting 4-of-5 from behind the 3-point arc. Behind Winston and some great defense on the other end, the Spartans led 23-12 after the first quarter.

Winston is off to a fast start to the season, shooting 46% from deep in the Spartan’s first two games. Last season, Winston started off a lot slower, and it even led to her spending a portion of the season coming off the bench. She later returned to the starting lineup and was a main contributor in the Spartans’ late season push.

Winston led all scorers at halftime with 15 points and freshman forward Matilda Ekh also made a couple 3-pointers and had six points for the Spartans. The Beacons were led by their two starting guards Grace White and Shay Frederick, who combined for 15 points in the half. The Spartans held a 39-28 lead at the break.

The second half started similarly to the first for the Spartans, with turnovers dominating the early part of the third quarter, bringing their total to 13 for the game. This allowed the Beacons to cut the Spartan lead to four, 43-39, and have the Spartans reeling early on in the half.

Eventually, MSU settled back into the game, as Ekh converted a huge and-1 opportunity to stretch the Spartan lead back to nine with 4:30 remaining in the third.

But the second half belonged to Nia Clouden. The senior guard showed glimpses of why she is on the Wooden, Ward and Naismith award watch lists before the season. Clouden scored eight points and dished out three assists, including a huge and-1 of her own, in the third quarter and led the Spartans to a 60-44 lead at the end of the third.

The Spartans will go as far as Clouden will take them this season, and on Tuesday, she came through when her team needed her most. Clouden finished with 18 points, — 15 of which came in the second half — eight rebounds and seven assists. She led the Spartans in scoring and assists for the game.

Three other Spartans joined Clouden in double figures. Winston finished right behind Clouden with 17 points, but had a quiet second half. The Spartans also kept up their aforementioned strong shooting start this season, shooting 44% from the field and 43% (9-of-21) from 3-point range.

MSU moves to 3-0 on the young season, and Merchant will go for win No. 300  as the Spartans’ coach on Friday afternoon when the Spartans take on the Bryant Bulldogs at the Breslin Center.