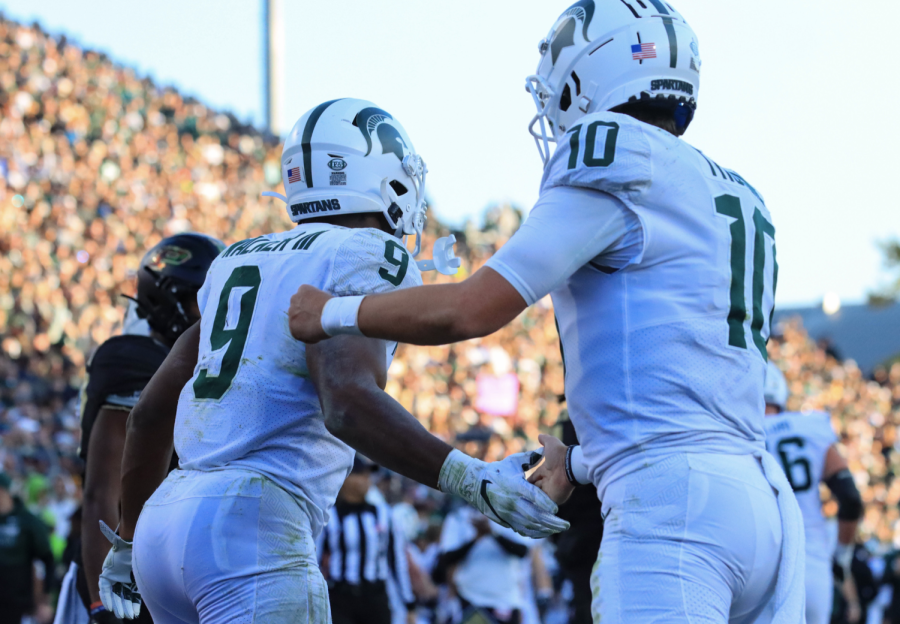 EAST LANSING — No. 8 Michigan State football was back to its winning ways on Saturday, as the Spartans defended their home field in their 40-21 victory over Maryland.

MSU bounced back after its lone loss of the season against Purdue. Spartan coach Mel Tucker and his team soundly handled the Terrapins from start to finish, ending Week 11 on a high note before they travel to Columbus for their most challenging opponent of the season.

Right off the bat, the Spartan offense scored in just three plays. Another successful flea-flicker resulted in a 52-yard touchdown reception by wide receiver Montorie Foster. It was the sophomore’s first TD in a Spartan uniform.

After a three-and-out on its next possession, the Spartan offense returned to the field with an intention of adding to the scoreboard. This time, it would be wide receiver Jayden Reed who received the scoring honors, as he and quarterback Payton Thorne connected for a 29-yard TD reception.

Backup kicker Stephen Rusnak missed the extra point, and the Spartans extended their lead to 13.

The Terrapins would have one last say before the end of the first quarter, though, as a quick six-play drive ended with a TD rush by running back Peny Boone. The play followed a 45-yard run by Maryland QB Taulia Tagovailoa.

Tagovailoa had 350 passing yards and two touchdowns in the matchup.

The Terrapins would trim the Spartan lead to just six points going into the second quarter.

MSU made a point to start the quarter strong. A long 14-play drive concluded with a 2-yard passing TD from Thorne to tight end Connor Heyward.

The Spartans then forced a three-and-out. On the next possession, another long drive by the MSU offense entailed a 17-yard reception and 12-yard run by running back Kenneth Walker III and a 21-yard reception by Reed. Walker ended the drive with a 1-yard rushing TD.

The Heisman Trophy candidate tallied 143 rushing yards and two touchdowns for the game.

In just four plays, the Maryland offense immediately answered with a score of its own. The TD came off a 32-yard reception by Terrapin tight end Chigoziem Okonkwo.

Just when it looked like the Terrapins were set to ignite a push for a comeback to start the half, Tagovailoa threw an interception into the hands of Spartan linebacker Noah Harvey, who returned the ball for 35 yards.

Thorne had high praise for the redshirt senior’s performance in what was his first start of the season.

“Our team knew that he [Harvey] would be ready whenever he needed to get in there,” Thorne said. “He played well. I thought he played well today, had a few key plays.”

The momentous play on defense would inspire another successful drive by the Spartans. Four plays after a big 26-yard gain by Walker, Thorne would find receiver Tre Mosley in the end zone for his fourth passing TD of the contest.

Maryland didn’t allow Spartan Nation to celebrate for long, though, as the Terrapins responded with a three-play drive for 64 yards that was capped off by another 32-yard TD reception by Okonkwo.

The deficit was cut to just 13 points.

Maryland’s fortune wouldn’t end there, as Spartan tight end Tyler Hunt fumbled the ball on the very first play of MSU’s retaliating drive. The Terrapins would have the ball at the Spartans’ 28-yard line.

On third-and-goal, a pack of Spartans broke through the Terrapin O-line to pressure Tagovailoa in the backfield. The QB threw the ball away, but was called for intentional grounding, losing 18 yards on the play to allow a fourth down.

At the start of the fourth quarter, Maryland was faced with fourth-and-4 at the MSU 24-yard line and sought to get the opportunity for a fresh set of downs or a potential TD.

Instead, the Terrapins were stopped by the Spartan defense, and that would all but solidify the MSU victory less than a minute into the final quarter.

The Spartans capitalized on the stop with a seven-play, 76-yard drive that featured a 28-yard reception by Reed and a 36-yard run by Walker. Walker topped off the drive with a rushing TD, his second of the game.

MSU will continue its quest to win the Big Ten East when it heads on the road to face No. 6 Ohio State next Saturday. The contest kicks off at noon.