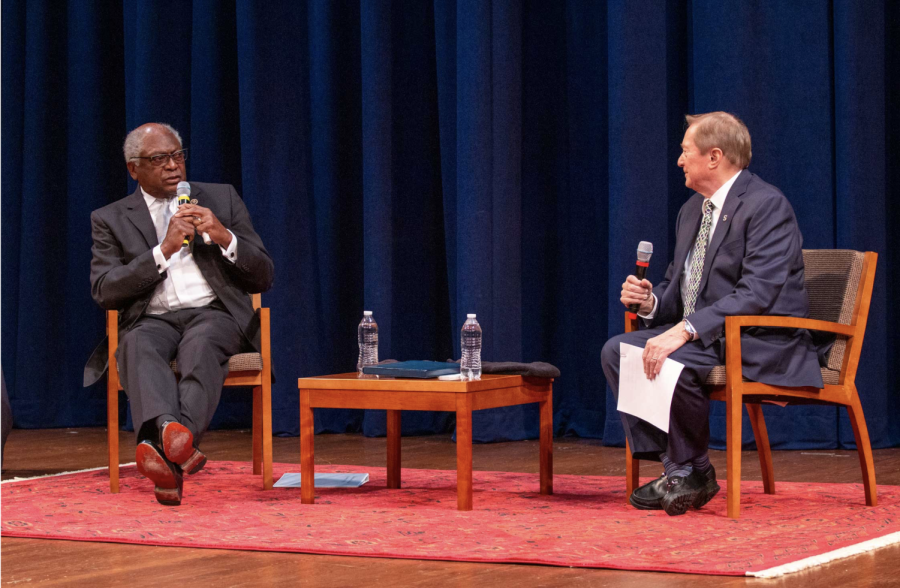 Since its inception in 2015, the Blanchard Public Service forum has hosted the likes of former President Bill Clinton, Congressman John Lewis, author Cokie Roberts, and former Secretary of State and UN ambassador Madeleine Albright, among others.

It has provided “the MSU community with the opportunity to celebrate public service and see, hear, and learn from national and international leaders, diplomats, and writers,” said Corwin Smidt, the Chair of the Department of Political Science at MSU. “We continue that tonight, as Governor James Blanchard Public Service Forum is proud to host Congressman James E. Clyburn.”

Governor Gretchen Whitmer was also present at the event. She spoke briefly, introducing Mr. Blanchard, former Governor of Michigan and the host of the forum. Introduced by MSU senior Wisdom Henry, Whitmer walked to a standing ovation from the audience.

Blanchard introduced some special guests present at the event, before handing the stage to Rep. Clyburn. “He is a president-maker,” Blanchard said of Clyburn, referring to his endorsement of President Joe Biden, which helped Biden win the primary in South Carolina and, eventually, become the Democratic Party’s nominee for President.

Clyburn addressed the audience briefly before sitting down to have a conversation with Blanchard. “Our challenge is to make the country’s greatness accessible and affordable for all. If that were to occur, I believe, all of the other issues that seem to divide us will go away,” he said.

Blanchard’s questioning, some of which had been asked by the students beforehand, ranged from. Clyburn’s personal life and his endorsement of Biden during the presidential primaries in 2020, to national issues such as the Jan. 6 insurrection, the spread of misinformation on social media, elections and democracy, and bipartisanship. When speaking on the spread of misinformation, Clyburn spoke of the need to reestablish the fairness doctrine, a policy of the U.S. Federal Communications Commission that required broadcasters to present public issues in an honest, equitable, and balanced manner. He argued for ending the filibuster, at least for constitutional issues, saying, “If we’ve got a tradition that people are using to deny civil rights, constitutional rights, it’s time for us to get rid of that tradition.”

In a light-hearted moment, Clyburn was asked if he would play football for Michigan State University. “Baseball was my sport,” the Congressman responded.

The forum concluded as Clyburn called for unity in these divided times, saying that if John Lewis was at there, he would say, “We are all one big family; that we all came over on different ships, but we’re all on the same boat now, and we need to row the boat together.”