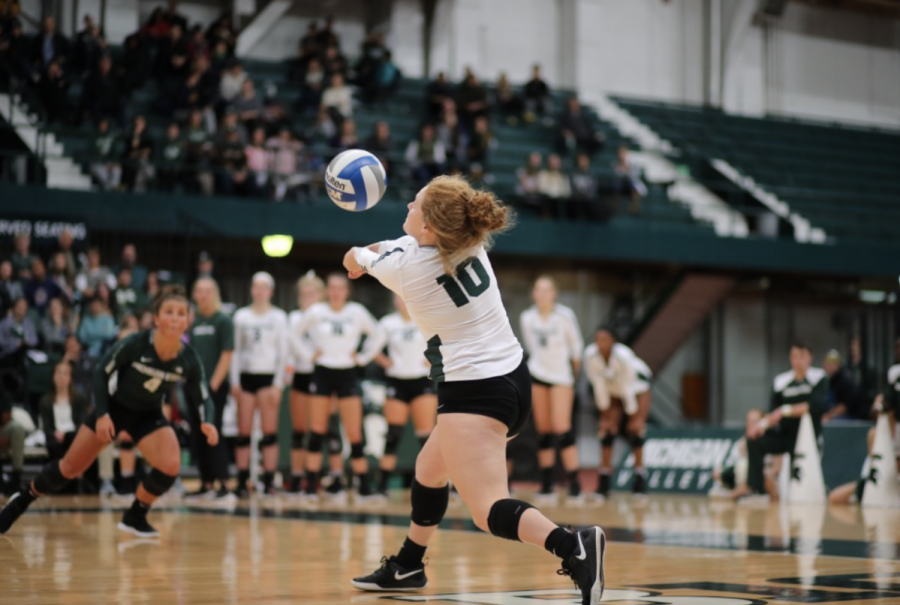 The Michigan State Spartans fell to the Iowa Hawkeyes in four sets on Friday night to drop to  9-11 on the season. Going forward, the Spartans must clean up three main issues as the season begins to  wind down.

1. The Spartans need to limit their errors

In the start of the first set, MSU looked promising. The offense quickly established a lead against Iowa and kept consistent pressure throughout the majority of the set. Senior Molly Johnson scored three consecutive service aces early in the set, quickly allowing the Spartans to enjoy a hot start.

This impressive performance was offset almost immediately by the amount of service errors and attack errors for MSU. Franklin put up a total of four service errors during the match; Kabengele had a total of 10 errors throughout the course of the game as well. These errors allowed Iowa to overtake the Spartans late in the first set and win 27-25.

These silly errors prevented MSU from continuing to establish a tone as the first set continued. Each time the Spartans took a larger lead, errors would allow Iowa to close the point gap.

2. The Spartans need to maintain control of the ball

Despite the various errors during the game, MSU’s offense has shown the ability to put consistent pressure on their opponents. With powerful outside hitters like Franklin and Kabengele, it is no surprise that Iowa was on the defensive for the majority of the first two sets.

This strong offensive pressure often broke the Iowa defense, allowing for the Spartans to take the second set, 25-19.

However, Iowa was able to come back in the final two sets and put MSU on the defensive. This prevented the Spartans from focusing on offense, and instead, the Spartans often found themselves playing from behind early and often.

When put on the defensive, like in the final two sets, MSU is forced to play more sporadically. Often, the Spartans paired a conservative defense with incredibly aggressive attacks which only led to more errors or missed blocks.

When MSU doesn’t control the ball, the team is forced to play outside of their comfort zone, ultimately allowing Iowa to take the final two sets 25-16 and 25-21, respectively.

There is no doubt that Franklin served as the core of the Spartans’ offense during the match. As mentioned earlier, she scored 16 kills against Iowa. In total, Franklin scored 17 points, more than any other player in the game. Throughout the season, Franklin has scored 307.5 points with 271 kills, both team-highs.

Despite issues with service errors, Franklin is by far one of the most crucial aspects of the Spartans’ offense going forward.