Markoch: Taking a closer look at MSU’s defense performance against No. 6 Michigan 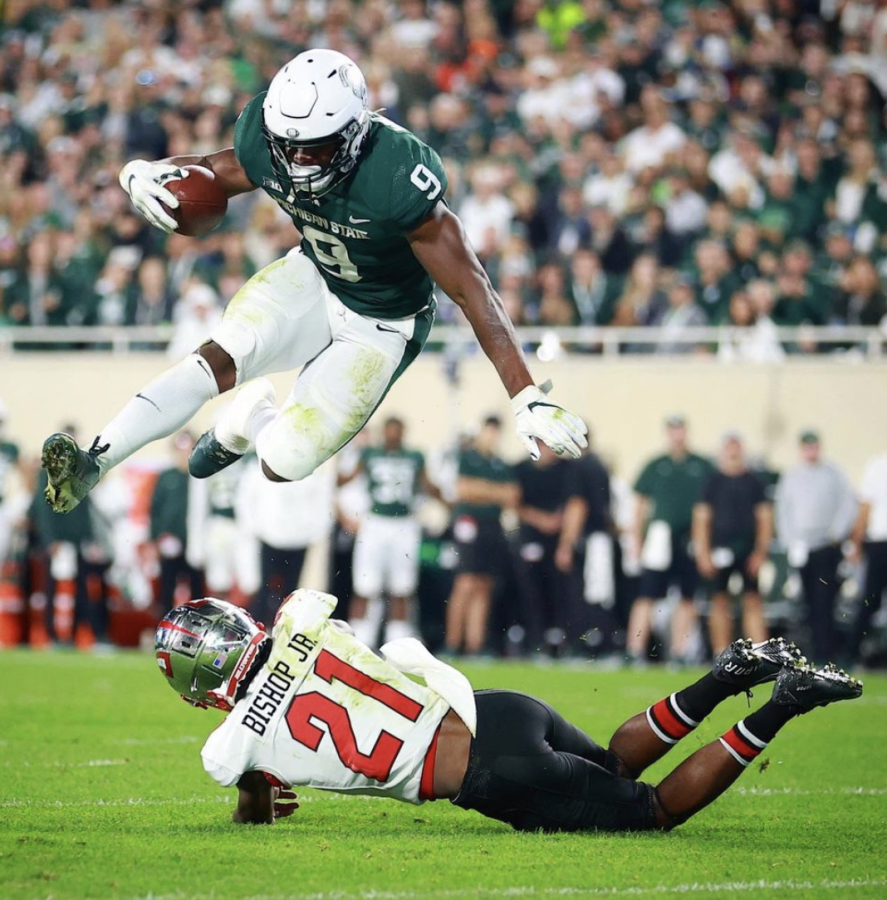 EAST LANSING, Mich— If someone would have said that Michigan State would win a game in which they allowed 33 points and over 550 yards of total offense, it probably would not have been believable.

But that is exactly what happened on Saturday afternoon as the Spartans defeated the Michigan Wolverines 37-33 in a come-from-behind thriller. MSU ended the game on a 23-3 run to storm back after being down by 16 points midway through the third quarter.

After the game, Spartan head coach Mel Tucker said that he has a special group of both upperclassmen and talented freshmen and sophomores who are contributing in all three phases of the game.

“They believe in what we’re doing, they are a resilient group, they are very unselfish and they play for each other,” Tucker said. “It’s important to them that they don’t let each other down so they’re going to play with extreme effort and are always going to play the next play.”

The defense certainly did not play its best game on Saturday, but it did enough to help the offense and get the win, so let’s take a deeper look into some takeaways from MSU’s defense against the Wolverines.

1. Bend but don’t break- The Spartans came into the game at No. 7 in the Big Ten and 19th in the country in scoring defense, allowing 18.7 points per game, but 13th in the Big Ten and 89th nationally in total defense, allowing just over 406 yards per game. This “bend but don’t break” mentality to give up yards but not points helped the Spartans remain undefeated to this point.

The Wolverines found their way to the red zone on six different occasions, and were a perfect 6-for-6 in the red zone, but only scored two touchdowns and settled for four field goals. Forcing field goal attempts can make a difference when there aren’t too many to be found and the Wolverines settling for those red zone field goals proved to be the difference on the scoreboard.

2. A tale of two halves on third down – One of the biggest takeaways from this game defensively for the Spartans in this game was their inability to get off the field on third down in the first half. The Wolverines converted four of their eight third down attempts in the opening frames, which helped keep the Spartans’ explosive offense on the sideline for extended periods of time.

However, in the second half, while it wasn’t much better for the Spartans, the Wolverines converted only four of nine attempts, but missed on their final three attempts, which proved costly in their defeat as they simply ran out of possessions and time.

After Thorne’s interception on the opening series, the Spartans had the Wolverines in a third down from their own 7-yard line, and what seemed to be a miscommunication in the secondary ended up in a 93-yard touchdown pass from Cade McNamara to Andrel Anthony and an early Wolverine lead.

The Wolverines converted multiple third and longs throughout the afternoon which kept the Spartans’ high-powered offense on the sideline. But by stepping up when it mattered most, the Spartan defense was able to give their offense just enough opportunities to steal a win at home.

3. Better late than never- They say the best passing defense is a great pass rush, and the Spartans generated almost no pressure on Wolverine quarterbacks Cade McNamara and J.J McCarthy in the first three quarters as they were able to throw for a combined 406 yards.

This is a Wolverine passing attack that was below average at best coming into this matchup, only averaging 190 yards per game through the air and the duo had 252 passing yards in the first half alone.

The three-headed pass rush of Jacub Panasiuk, Jeff Pietrowski and Simeon Barrow came into the game with a combined 11.5 sacks, but had none in Saturday’s game. However, some key quarterback pressures in the fourth quarter forced turnovers and got the Spartan defense off the field in the final minutes.

“We talk about competitive greatness, being at your best when your best is needed, and we saw that down the stretch,” Tucker said.

The Wolverines have one of the better offensive lines in the country, which may have played a significant role in the lack of pass rush for the Spartans. Whatever the case was, the lack of a pass rush meant the Spartans’ secondary was caught in coverage for far too long, and it almost cost the Spartans the game.

4. A rough day for the secondary- It didn’t matter whether it was man or zone coverage, the Spartans’ secondary was not sharp on Saturday.

On the opening touchdown to Andrel Anthony, Spartans’ safety Angeo Grose, who did not have his best day, was expecting help behind him that never arrived, and that miscommunication allowed Anthony to get out in open space and score.

Grose struggled throughout the day. He got caught behind Mike Sainristill on a crossing route that ballooned the Wolverine lead to 30-14 in the third and got beat on a deep post route to Sainstrill in the fourth that led to a Wolverine go-ahead field goal with a little over nine minutes to go.

Anthony and Sainstrill gave the Spartans’ defense all kinds of fits, providing energy to a Wolverine offense that was unable to run the ball as well as they have gotten used to. They, along with the two Wolverine quarterbacks, were consistently able to beat whatever looks Spartans’ defensive coordinator Scottie Hazelton threw at them.

The duo combined for six catches,198 yards and three touchdowns on the day, but it wasn’t enough as the Wolverines did not have an answer for Kenneth Walker III and the Spartans’ running game.

The secondary did end the day on a positive note however as freshman cornerback Charles Brantley intercepted Cade McNamara on the final drive, sealing a key rivalry win for the Spartans at home. It was the first interception of Brantley’s young college career.

“He’s not the biggest…but you can see he comes downfield and tries to lay the wood,” Spartans’ wide receiver Jayden Reed said of Brantley. “He’s not afraid of anybody.”