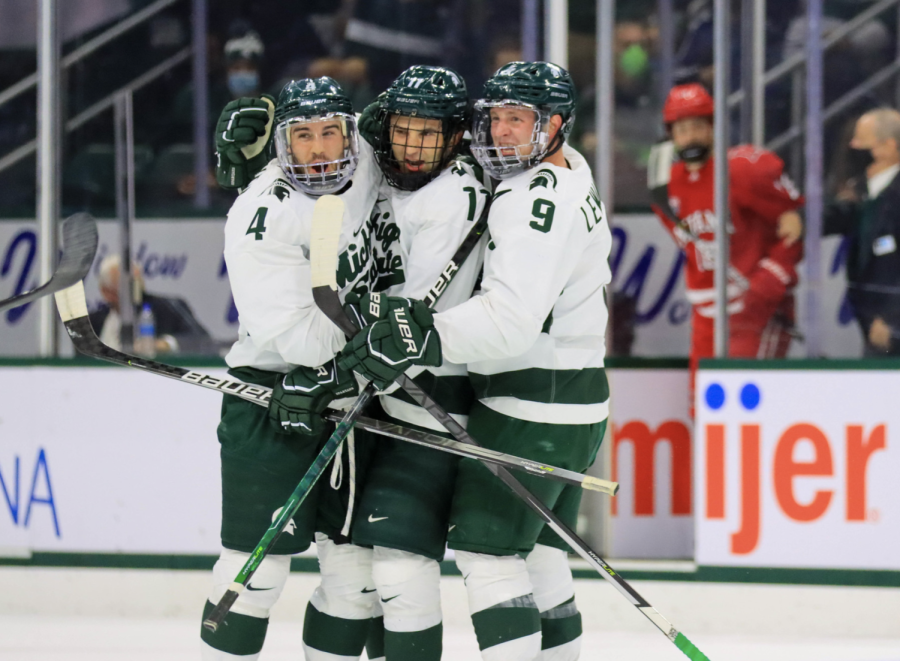 EAST LANSING — The Michigan State Spartans (3-1-0) will hit the road for the first time this season when they take on UMass-Lowell (1-1-0) this weekend. The weekend series will be the first time the two teams face each other since 2014.

Michigan State is coming off a sweep of Miami (OH) last weekend, beating the RedHawks 3-1 in Game 1 and earning a come-from-behind 2-1 victory in Game 2. Michigan State’s success over the weekend came from the stick of UMASS transfer Jeremy Davidson. Davidson scored the game-winning goal in Game 1, which was his second of the game, and kickstarted the Spartans’ comeback bid in Game 2 with a goal early in the third period. His three goals over the weekend was enough to earn him the Big Ten’s Second Star of the Week.

UMass-Lowell heads into the weekend having not played a game since Oct. 3, after last weekend’s series against Long Island University was postponed due to COVID-19 issues within the LIU program. In the River Hawks’ season-opening series, they managed to split against Arizona State in Tempe, Arizona. The River Hawks dropped Game 1 after ASU scored two power-play goals in the third period to earn the 5-3 victory, However, the River Hawks were able to pull out a 4-2 victory in Game 2, giving them their only win of the season so far.

The RIver Hawks lead the all-time series against MSU 6-4-0 and have won six of the previous eight meetings between the two teams. The teams have met twice in the postseason with the River Hawks beating the Spartans in the NCAA West Regional Opener in 1994 and 1996. This will be only the second and third time that MSU will play the River Hawks at the Tsongas Center, having lost its last meeting in Lowell, 2-1.

Michigan State heads into the weekend with 13 players having earned at least one point through the first four games of the season. Fifth-year senior Mitchell Lewandowski leads the team in points with six, while both Lewandowski and Davidson are tied for the team lead in goals with three apiece. Transfers Griffin Loughran, Erik Middendorf and Davidson have scored or assisted on nine of MSU’s 12 goals this year, giving the Spartans a much-needed boost on offense.

UMass-Lowell heads into this weekend with a different look than they had last year. The River Hawks finished 10-9-1 last season, but made a surprising run to the Hockey East Championship game, ultimately falling to the eventual national champions UMass-Amherst. The River Hawks also lost their leading goal-scorer, Matt Brown, who transferred to Hockey East rival Boston University. Brown led the team with eight goals last season and ended his time in Lowell amassing 37 points in 52 games. The River Hawks have nine new faces in the program this year, including Matt Crasa, who leads the team in points with three goals and one assist in two games this season.

UMass-Lowell will win if…

…it can score on the power-play. The special teams battle will be interesting to watch this weekend, especially since the River Hawks’ lone loss of the season came in a game where they took 27 minutes of penalties, giving up four power-play goals in the process. The Spartans penalty-kill is 10-for-11 on the season, which places them third in the Big Ten. Conversely, the River Hawks are operating at 43% on the power-play. If the River Hawks can win the special teams battle and score one or two power-play goals, they will be in good shape to take a game (or two) from the Spartans.

MSU will win if…

…it wins the transfer portal battle. MSU has three transfer players that have made their debuts this season and have made an immediate impact on the Spartan offense. UMass-Lowell lost their leading scorer from last year, but also gained graduate transfer, Nick Austin, who gathered 37 assists in four years at Colgate as a defenseman. It’s a simple notion: If the Spartan transfers can score more goals than the UMass-Lowell transfers can defend, then the Spartans will win.