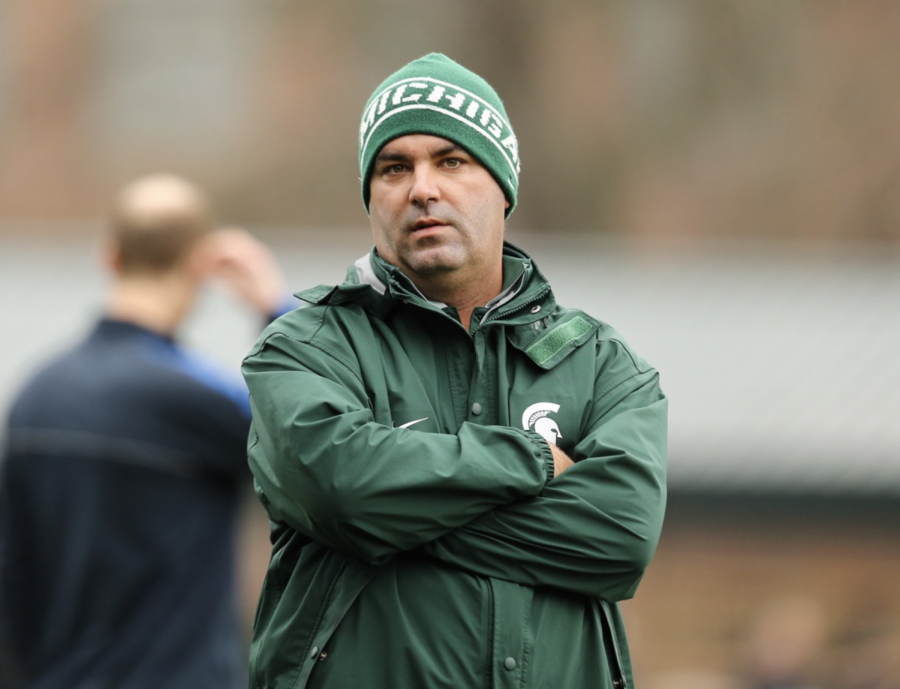 EAST LANSING – The Michigan State men’s soccer team celebrated its senior day with a 1-0 win over the Ohio State Buckeyes on Oct. 17 behind a late first-half goal from sophomore midfielder Vedad Kovac. With the victory, the Spartans (6-6-2) moved up to sixth place with eight points in the Big Ten standings, directly behind Michigan.

The Spartans celebrated the collegiate careers of 11 seniors at the end of the game, many of whom were an integral part of the 2018 College Cup team that made it to the semifinals.

“They have created a great culture here and they have given everything to the program,” head coach Damon Rensing said. “They have set the standard for four years.”

Freshman goalkeeper Lance McGrane made his first start in conference play and made six saves to keep a clean sheet on his debut. He was featured as a substitute for 27 minutes in last week’s non-conference loss to Western Michigan.

“It was a special moment and I’m definitely going to remember it for a while,” McGrane said.

The Spartans came into the Ohio State game fresh off a 2-1 victory over No. 22 Rutgers on Oct. 10 when sophomore midfielder Jack Zugay scored the winner in overtime. Ohio State (4-8-1), on the other hand, hasn’t won a game since its 2-1 win over Bowling Green on Sept. 29, a stretch dating back four games.

Zugay and senior captain Jack Beck started in midfield against the Buckeyes while Farai Mutatu and Gianni Ferri were listed as the forwards.

The Buckeyes had the first dangerous opportunity of the game in the 12th minute when midfielder Laurence Wootton had a long-range effort go wide of the post; the counterattack started by junior forward Channing Chasten was nearly capped off by Wootton.

In the 27th minute, McGrane came up with an acrobatic save to deny OSU midfielder Xavier Green the opening goal. It would not be the last time that McGrane kept the Spartans on the right side of the scoresheet.

“It [the shutout] was needed and it’s a massive boost for us heading into Maryland, so hopefully we can keep this going,” McGrane said.

Immediately after, Buckeye defender Thomas Gilej picked up a yellow card after tackling defender Will Perkins on an attacking drive down the left wing.

30 seconds before halftime, the Spartans earned a corner kick that led to the first Big Ten goal of Kovac’s career. Midfielder Michael Miller headed the ball off a cross back into the middle, where Mutatu hit the post and Kovac capitalized off the rebound to put the Spartans ahead.

“It’s something special, and I’m grateful for it,” Kovac said.

“Vedad (Kovac) has been training really well, and if you train well, you’re going to get opportunities,” Rensing said. “He’s got a nose for goal.”

Kovac seized the opportunity and gave his senior teammates a day to remember.

At halftime, Rensing was pleased with the way his team got a goal in the late stages of the half, setting them up for a strong ending.

In the 51st minute, the Buckeyes had the first shot on goal in the second half by Wootton, who had his shot saved again by McGrane. Wootton broke through the Spartan defense and was left one-on-one with McGrane, but his effort bounced off the freshman goalkeeper.

The next high-percentage scoring opportunity for the Spartans did not come until the 69th minute when midfielder Kellan Landefeld had his shot saved on a last-second tackle by OSU defender Nathan Demian.

As the game headed closer to fulltime, Beck had a right-footed volleyed shot in the 76th minute that skipped past a couple of defenders, but his shot was cleared away.

After a long spell of possession, the Spartans secured the 1-0 victory behind a strong defensive performance from the back four. The 11 seniors for the Spartans were recognized at the end of the match as they walked with their family members across the field in front of a packed DeMartin crowd.

“It was cool to walk out with my family and reminisce on the last four years,” Mutatu said. “I’m thankful that I’m here, that I have made it this far, and I’m excited to keep going for the rest of the season.”