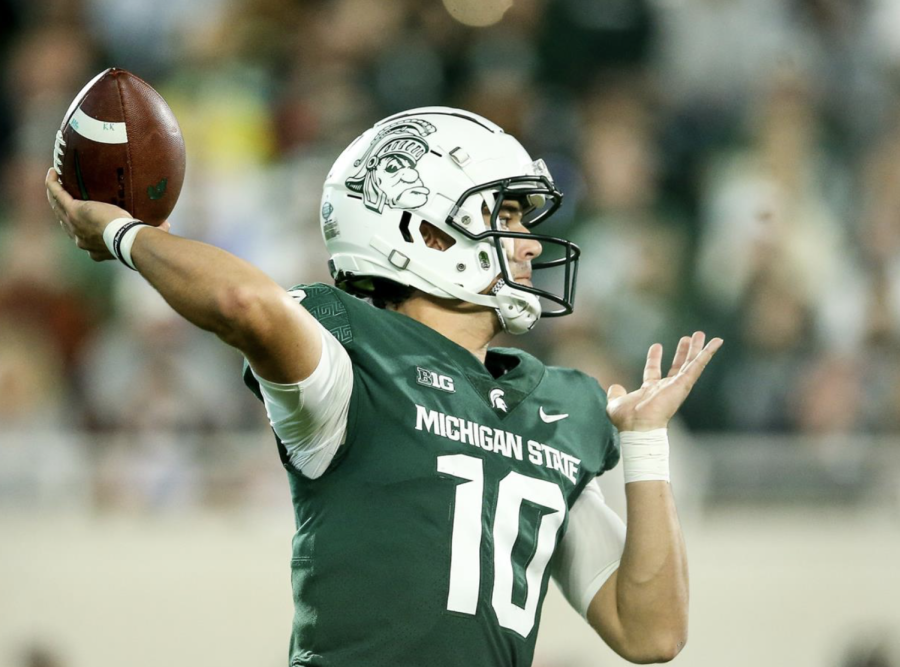 BLOOMINGTON, IN – The Michigan State Spartans are heading to Bloomington, Indiana, to take on the Indiana Hoosiers. MSU is coming off a 31-13 road win over Rutgers to improve to 6-0 and is ranked No. 10 in the AP poll. The winner will take home the Old Brass Spittoon, a trophy the Spartans have won in 48 out of 67 overall meetings since 1950.

The Hoosiers are 2-3 on the season and are coming off their bye week headed into Saturday’s game. In their previous game, Indiana was shut out by No. 7 Penn State 24-0. To make matters worse, starting quarterback Michael Penix Jr. was injured and will likely miss this week’s game with a separated shoulder.

Despite their 2-3 record, the three losses Indiana has suffered have come at the hands of three current top 10 teams. The Hoosiers opened the season with a loss to No. 2 Iowa 34-6, in Week 3, they lost to No. 3 Cincinnati 38-24 before falling to No. 7 Penn State.

Redshirt junior quarterback Jack Tuttle will have a big responsibility taking over for Penix. After Penix went down against Penn State, Tuttle was 6-for-12 through the air with 77 yards and one interception. Michigan State’s secondary has been prone to allowing yards in the air. The Spartans are last in the Big Ten in passing defense as they are the only team allowing more than 300 yards per game in that category.

Indiana is led in receiving by tight end Peyton Henderschott and wide receiver Ty Fryfogle. A season ago, Fryfogle was a Third-Team All-American selection after hauling in 721 receiving yards, the fourth-best mark in the Big Ten.

Led by running back Kenneth Walker, quarterback Payton Thorne and wideouts Jayden Reed and Jalen Nailor, Michigan State’s offense this season has been quite arduous for opposing defensive coordinators to slow down.

Currently, Walker leads the country in rushing yards (913), rushing yards after contact (670) and number of rushes over 10 yards (26).

Last week, Walker broke the program record for the longest offensive play from scrimmage with his 94-yard touchdown run in the third quarter. The Spartans will look to keep the ground game going against the Hoosiers’ run defense that ranks ninth in the Big Ten.

His 221 receiving yards was good for the fourth-best individual performance in school history and his three receiving touchdowns tied the best single-game record in MSU history.

The front seven of the Michigan State defense has been a bright spot all season long; The Spartans tallied four sacks against Rutgers. This was the fourth straight game of three or more sacks for the defense. In total, MSU has 23 sacks on the season, which is the best mark in the Big Ten and tied for the fifth-best mark in the country.

With No. 8 Michigan coming up for MSU after the bye week, the Spartans must be careful not to overlook an Indiana team that may be 2-3, but has not lost to a team that is ranked outside of the top 10. If Walker and the rest of the offense can control the ball and convert at the end of drives, MSU should be in a prime position to come out of this game 7-0.

If not, this is a Hoosier team that is coming out of a bye week and playing desperately trying to salvage their season, and the Spartans will have their hands full.