Spartans down Falcons to earn first win of season 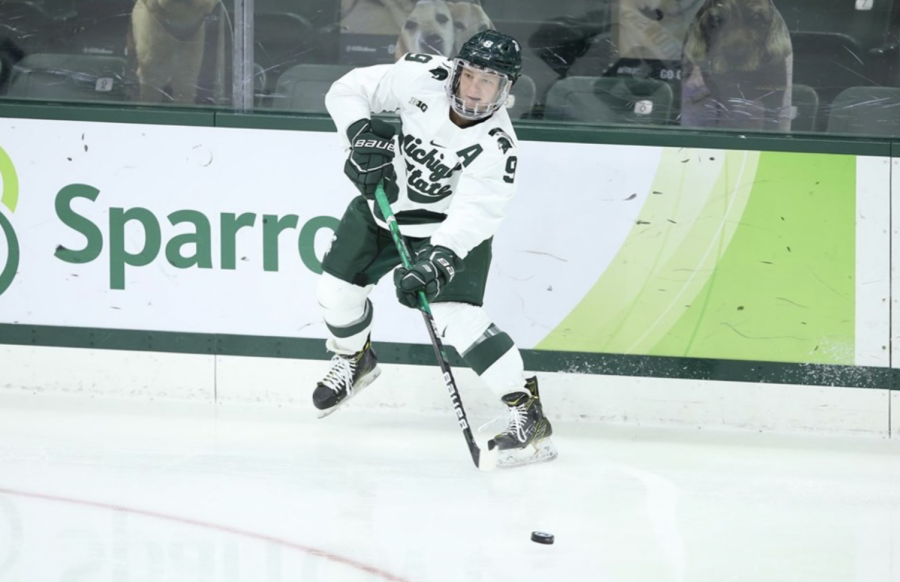 EAST LANSING — The Michigan State Spartans defeated the Air Force Falcons using a revamped power play that resulted in a 5-1 onslaught Saturday night. The win gave the Spartans their first victory of the season and a much needed boost after Friday’s heartbreaking overtime loss.

“You like to see guys respond,” head coach Danton Cole said. “You know, it’s a gut check. It was really a one-shot difference (Friday), and they handled it maturely and they were focused. You could tell right from the drop that they were going to play well tonight.”

If anything needed extensive improvement this year, it would be Michigan State’s special teams. The Spartans finished last season with the third-worst power play in Division I hockey, converting an abysmal 7% of their power plays. The Spartans also finished in the bottom half of the nation in penalty kill percentage at 78%.

The Spartans went on the power play just over a minute into the game. Though they did not convert on the man-advantage, the Spartan power play showed signs of life.

“Everybody thinks it has to be seven passes and a perfect back-door on a power play,” Cole said. “Most of the time, the pretty plays are after a shot and a rebound, and then your skill guys take advantage of the other team recovering.”

The Spartans would end up having six power plays, scoring on three of them. The game would ultimately feature 54 penalty minutes, a number that was boosted with two major penalties that carried 15 minutes of total penalty time each. For a team that struggled mightily in the goal department last year, Saturday’s 50% success rate on the power play proved to be just what they needed to get past the Falcons.

Griffin Loughran may be the answer to Michigan State’s scoring woes. The Northern Michigan transfer got the Spartans on the board early with his first goal of the season, and his first as a Spartan, when he put a rebound chance behind Air Force goaltender Alex Schilling. Schilling made the initial save with the knob of his stick, but couldn’t corral the rebound and Loughran was able to put it past the outstretched netminder on the Spartans second power play.

“He’s real shifty around the net. He’s not a big guy but he goes to the hard areas,” Cole said. “It’s nice to see him rewarded and a good opening weekend for Griffen.”

Loughran would double his account less than two minutes later when he once again put a rebound chance behind Air Force’s senior netminder. The Spartans earned their third power play of the game when Air Force forward Will Gavin was assessed a five-minute major and a game misconduct for a hit to the head on Spartan forward Mitchell Lewandowski.

Michigan State was able to enter the zone with a 4-on-3 as a collision at center ice forced Air Force to defend with three players. The Spartans bombarded Schilling with a flurry of shots but it was Loughran’s forehand poach that sent the puck behind the senior netminder, who was laying flat on the ice, resembling a snow angel. The goal gave the Spartans a two-goal lead within the first 10 minutes of the game.

For all the Spartans efforts on special teams, there were still some defensive lapses that could have had, and did, have negative consequences.

The Spartans were caught sleeping on Air Force’s lone goal. After killing off a Kristof Papp goaltender interference penalty, the Spartans lost track of Air Force defenseman Luke Rowe. After the Falcons won an offensive zone faceoff, Rowe got the puck near the left point and ripped a shot that beat Charleson clean and clanked off the elbow of the goal and in.

The goal was one of a few opportunities that Air Force had to tie the game in the first period. Air Force would continue to find themselves with wide open opportunities, but the stellar goaltending of sophomore Pierce Charlseon kept the Falcons at bay through the first two periods. Charleson would finish the game with 28 saves and the lone goal conceded.

The defensive errors crossed over to the other end of the ice in the third period. MSU forward Adam Goodsir was assessed a game misconduct for a hit-to-the-head during a stoppage in play. Goodsir was involved in a skirmish in the Air Force zone and cross checked an Air Force player.

He was originally given a minor penalty, but Air Force challenged the play and the penalty was changed to a major, giving the Falcons a chance to cut into the Spartan lead with the “score at will” power play. The Spartans would go on to kill the entirety of the penalty, but not without a few close calls.

“I thought we lost a little discipline, which I didn’t like,” Cole said. “We’ll have to be better at that. It’s a 3-1 lead, you can’t take a five-minute penalty at that time of the game.”

Jesse Tucker is one of three incoming freshmen for the Spartans this year, but he does not play like one. His place on the fourth line does not tell just how much of an asset he is on the ice. Not only can he use his 5-foot-11, 183-pound frame to body opponents in the offensive zone, but he has arguably some of the best stickhandling on the team.

This was on display in the first 10 minutes of Saturday’s game during MSU’s first power play. Tucker took the puck behind the net and proceeded to use the back of the goal to pass the puck to himself and escape pressure from an Air Force forward. His evasive maneuver set up David Gucciardi for a one-timer in the slot, but Gucciardi fanned on the shot.

“Tuck is a good hockey player and he is going to do some good things for us this year,” Cole said. “He’s got a real good Hockey IQ, he’s got a little bit of swagger in his game and a very confident young man.”

Tucker is also on the Spartans first power play unit, and for good measure. The Ontario native is the career leader in assists for the USHL’s Green Bay Gamblers, with 88 helpers during his three-year tenure. In the 2020-21 season, 16 of his 33 assists came on the power play. Coincidentally, he opened his Michigan State scoring account with an assist on Loughran’s game-opening power-play goal.

Loughran wasn’t the only Spartan who had an impressive night. Michigan State had four players record multi-point games, with fifth-year senior Mitchell Lewandowski leading all players with three points (two goals, one assist). It was the first time since 2013 that the Spartans had two different players record two goals in a single game. Villain Haag and Greg Wolfe were the last Spartan duo to accomplish the feat in MSU’s 8-2 victory over Princeton. Sophomore defenseman Nash Nienhuis and junior forward Josh Nodler both recorded two assists on the night. Nienhuis’ two points Saturday night puts him well on his way of surpassing his point total from last season. The two assists for Nodler allow him to head into next weekend with three points on the season.

The Spartans decided to dress seven defenseman with Aiden Gallacher making his regular season debut. Michigan State was still without sophomore forward Kyle Haskins, who played in all 27 games last year. Danton Cole elected to go with this lineup:

Cesana did not have a great season in 2020-21. His 12 points were nowhere near his previous season total of 22 points, a mark that saw him earn an All-Big Ten second team selection.

Tonight, he reached into his bag of tricks to open his scoring account.

With just under five minutes left to play, Cesana scored the goal of the night. After coincidental minors were given to MSU’s Christian Krygier and Air Force’s Ty Pochipinski, the Spartans found themselves with a little more space in the Air Force zone.

After linking up with Lewandowski, Cesana took the puck from the faceoff dot, turned on goal and scored on Schilling with a between-the-legs shot that sent the crowd at Munn Ice Arena into a frenzy, giving the Spartans a 4-1 lead.

“I was kind of bobbling the puck a bit and I just figured if I went backhand he was going to read it,” Cesana said. “So I figured, ‘why not try it?’ I wasn’t really aiming anywhere specific, but it went in and it was cool.”

The Spartans will be back in action next weekend when they host the Miami (OH) University Redhawks at Munn on Friday, Oct. 15.